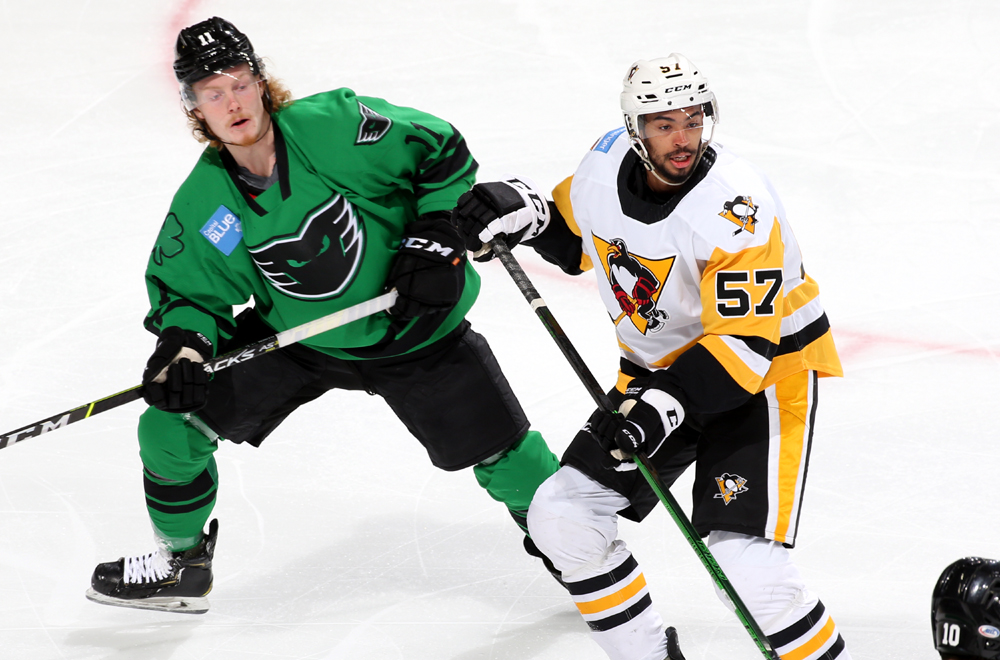 ALLENTOWN, Pa. – The Wilkes-Barre/Scranton Penguins and Lehigh Valley Phantoms scored in bunches during an electrifying Sunday matinée at PPL Center, but the Phantoms ultimately snagged a 5-4 win in overtime.

Wilkes-Barre/Scranton (5-4-3-1) fought back from a 3-1, second-period deficit to seize a 4-3 lead going into the second intermission. However, a pair of goals by Tanner Laczynski forced OT and then won the game for Lehigh Valley.

A quiet first period preceded a second-period scoring bonanza, one that started just 14 seconds into the frame. Wade Allison beat Shane Starrett with a well-placed snapsnot and gave Lehigh Valley a 1-0 lead.

Nick Schilkey provided a prompt response just 1:33 after the Allison tally. However, the Phantoms hopped back on top with a goal by Tyson Foerster less than a minute after Schilkey’s goal.

Chris Mueller parked on the backdoor to deflect a feed from Linus Sandin past Starrett at 4:45 of the middle frame, extending Lehigh Valley’s lead to 3-1.

Wilkes-Barre/Scranton started to storm back with a pair of goals midway through the period. Drew O’Connor tipped in a point shot at 9:17, and less than a minute later, Jonathan Gruden tied things up, 3-3.

The Penguins took their first lead of the game with 2:31 left in the second stanza. Jordy Bellerive charged ahead on a three-on-one rush and ripped his team-leading fifth goal of the year to the back of the net.

Wilkes-Barre/Scranton survived a late penalty kill that carried over to the start of OT, only for Laczynski to strike when the teams were skating at four-on-four. Laczynski’s game-winner arrived 68 seconds into the extra frame.

Starrett recorded 18 saves in the overtime loss for the Penguins, while Felix Sandström posted 22 stops while manning the Phantoms’ crease.

Wilkes-Barre/Scranton’s next game is Wednesday, Mar. 24, when they take on the Syracuse Crunch at Mohegan Sun Arena at Casey Plaza. Puck drop between the Penguins and Crunch is scheduled for 7:00 p.m. Fans can secure their seats for Wednesday’s home game by calling the team’s front office directly at (570) 208-7367.