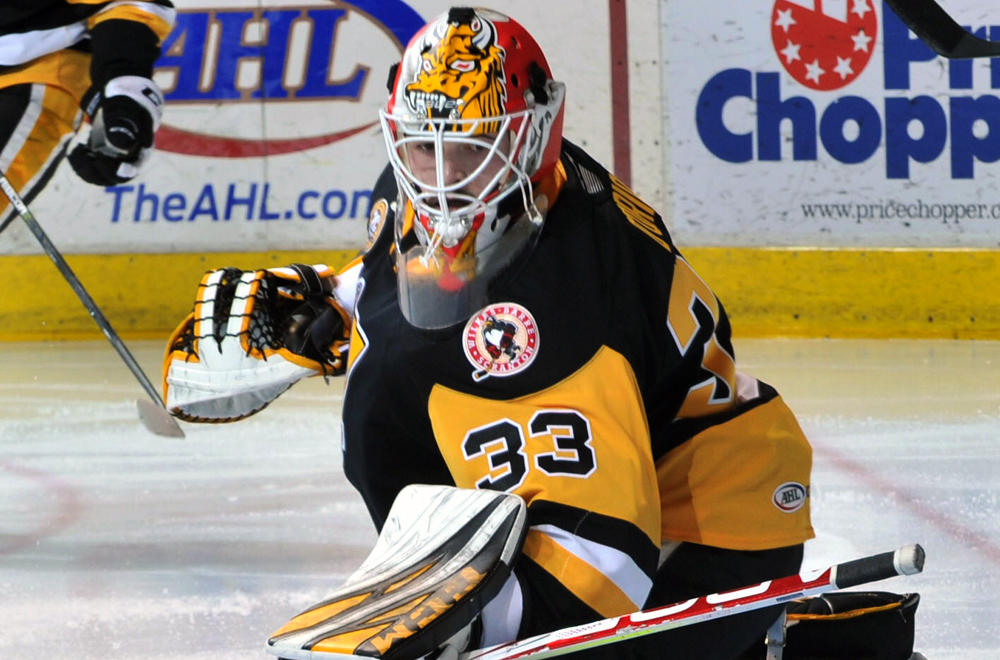 D’Orio, 21, has amassed a 2-6-1 record with Wheeling this season after starting the season on Pittsburgh’s taxi squad. Both of his wins have come this month, with D’Orio posting his first pro shutout on Mar. 9 against the Indy Fuel. In 11 games with the Nailers this season, the native of Sherbrooke, Québec has earned a 2.97 goals against average and .892 save percentage.

D’Orio logged one game with Wilkes-Barre/Scranton at the end of the 2018-19 season. In his AHL debut, he denied 28 of 33 shots faced in a loss to the Bridgeport Sound Tigers.

Prior to turning pro, D’Orio was a standout in the Québec Major Junior Hockey League. D’Orio was part of the Saint John Sea Dogs QMJHL Championship-winning squad in 2016-17. He signed a three-year, entry-level contract with Pittsburgh as an undrafted free agent after that season, then proceeded to lead the QMJHL in saves (1478) during 2017-18.

Starrett, a six-foot-five, 26-year-old goalie, appeared in four games for the Penguins, accruing a 1-0-2 record, 3.57 goals against average and .852 save percentage in three starts.

Prior to the start of Wilkes-Barre/Scranton’s 2020-21 season, Starrett played eight games for Wheeling. He also played one game with the Nailers after being reassigned by the Penguins on Mar. 13. In that contest, Starrett posted a season-high 45 saves against the Fort Wayne Comets. During his nine total games with Wheeling, the Bellingham, Massachusetts native earned a record of 2-4-3 in addition to a 3.47 goals against average and .889 save percentage.

Wilkes-Barre/Scranton’s next game is tonight, Wednesday, Mar. 24 against the Syracuse Crunch. Game time is scheduled for 7:00 p.m. at Mohegan Sun Arena at Casey Plaza. Fans who wish to purchase individual game tickets for the Penguins’ remaining home games in March or become a season ticket member for the upcoming 2021-22 season can contact the team’s front office at (570) 208-PENS.