PENGUINS LOSE TO CRUNCH ON WEDNESDAY 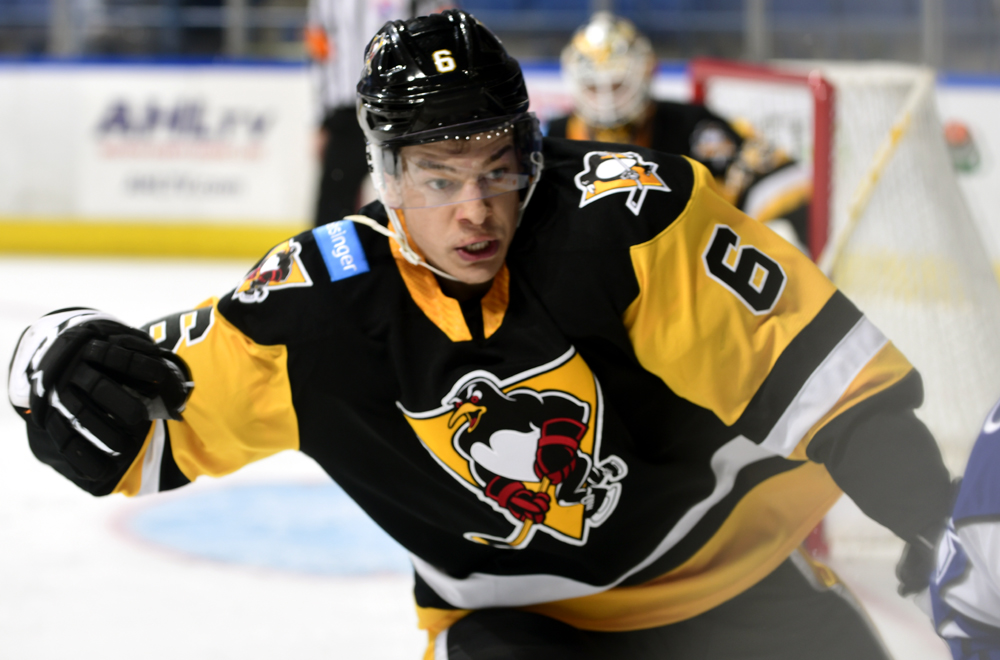 WILKES-BARRE, Pa. – The Wilkes-Barre/Scranton Penguins lost to the Syracuse Crunch, 6-3, at Mohegan Sun Arena at Casey Plaza on Wednesday night.

Wilkes-Barre/Scranton (5-5-3-1) surrendered six goals in a 10-minute span during the first period, allowing Syracuse to earn its fourth win in a row.

Gemel Smith scored a hat trick for the Crunch before the game was five minutes old. His first of the night came on a subtle redirection from a sharp angle 3:23 into the game. Boris Katchouk scored 16 seconds later, before Smith’s second and third goals arrived at 4:52 and 8:40 to push Syracuse’s early lead to 4-0.

Devante Stevens made it 5-0, Crunch, midway through the first period, and Jimmy Huntington joined in on the action at 14:00 to end Syracuse’s outburst.

Tim Schaller ripped a shot short-side, top-corner over the shoulder of Christopher Gibson, putting the Penguins on the board with three minutes left in the first period.

Wilkes-Barre/Scranton captain Josh Currie lit the lamp five seconds into his team’s first power play of the game, cutting the score down to 6-2 at 3:27 of the middle frame.

The Penguins added another power-play goal in the third with Nick Schilkey finishing a set-up courtesy of Schaller and Currie.

Gibson finished the game with 23 saves for Syracuse. Alex D’Orio recorded 15 stops on 17 the shots he faced after stepping between the pipes to replace Emil Larmi in the first period. Larmi made one save on five shots against.

Wilkes-Barre/Scranton’s next game is Friday, Mar. 26, when they take on the Hershey Bears at Mohegan Sun Arena at Casey Plaza. Puck drop between the Penguins and Bears is scheduled for 7:00 p.m. Friday’s game is already at capacity. Fans who wish to attend Penguins home games in April should stay tuned for updates on wbspenguins.com.