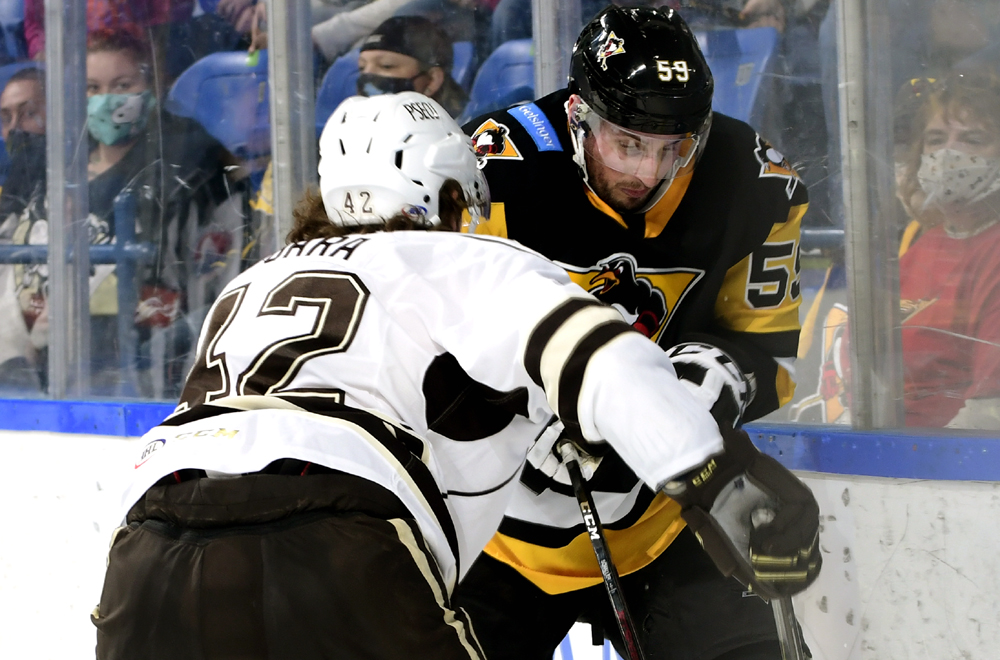 WILKES-BARRE, Pa. – The Wilkes-Barre/Scranton Penguins were handed a hard-fought loss by the Hershey Bears on Friday night, falling by a score of 3-1.

Wilkes-Barre/Scranton (5-6-3-1) battled to the very end against their bitter rival, but a third-period power-play goal by the Bears gave them the edge.

A largely even first period ended with Hershey in a 1-0 lead after Philippe Maillet converted on a breakaway at 13:21.

The second period proved to be a stalemate, with both goalies staying sharp when called upon. Alex D’Orio, making his first start of the season for Wilkes-Barre/Scranton held firm after surrendering the breakaway goal in the opening frame, while Zach Fucale turned aside all 15 of the Penguins’ bids in the second period.

Hershey started the third period with a carryover power play, forcing D’Orio to make his best save of the night. When Matt Moulson whisked a pass across the Penguins’ crease to the backdoor for Maillet, D’Orio flopped down on his side to seal the bottom of the ice and deny Maillet what could have been his second goal of the game.

The next shift after D’Orio’s excellent save, Sam Miletic set up Jordy Bellerive in the slot for Bellerive’s team-leading sixth goal of the season and tied the game, 1-1.

Moulson put the Bears back in the lead with a man-advantage marker midway through the final frame of regulation.

The Penguins pushed and pushed, but Fucale had the answer at every turn. Eventually, Hershey sealed the win with an empty-net goal from Kody Clark.

Wilkes-Barre/Scranton’s next game is Sunday, Mar. 28, a rematch with the Hershey Bears at Giant Center. Puck drop between the Penguins and Bears is scheduled for 1:00 p.m. The Penguins’ next home game is Saturday, Apr. 10 against the Binghamton Devils. Fans who wish to attend Wilkes-Barre/Scranton home games in April should stay tuned for updates on wbspenguins.com.