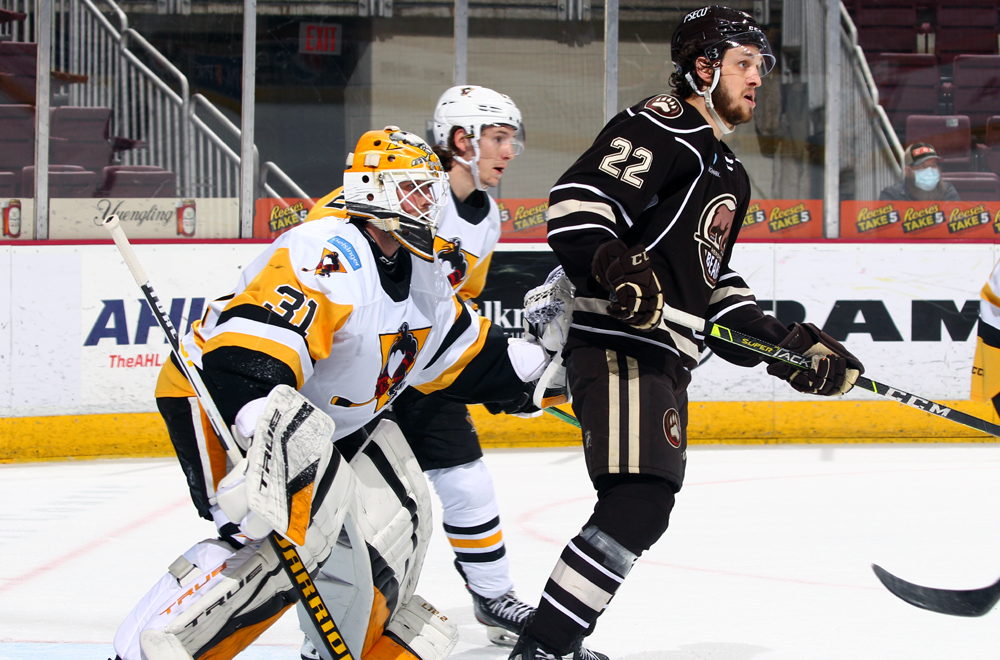 HERSHEY, Pa. – The Wilkes-Barre/Scranton Penguins lost their rematch with the Hershey Bears, dropping a 3-1 decision at Giant Center on Sunday afternoon.

Wilkes-Barre/Scranton (5-7-3-1) suffered an identical, 3-1 fate to Hershey on Friday. Also, both games were decided by a power-play goal late in the third period.

The Bears wasted no time getting on the board, as Brian Pinho tipped a shot into the Penguins’ net 18 seconds into the game.

Wilkes-Barre/Scranton settled in after the early setback, but could not solve Pheonix Copley in the first 20 minutes.

Eventually, the Penguins did break through. Midway through the second period, Nick Schilkey and Tim Schaller raced up ice on a two-on-one rush. Schilkey fed the puck to Schaller, who slammed it to the back of the net. Not only did Schaller’s goal tie the game at 1-1, it was also his 100th point in the AHL.

The Penguins and Bears proceeded to up the ante in terms of their physicality as the game wore on. Both teams punished one another with thundering hits along the boards and in open ice. Almost every whistle was followed by a scuffle and exchange of fisticuffs.

After laying out Pinho with an open-ice hit in the third period, Josh Currie dropped the gloves with Bears defenseman Martin Fehérváry.

By the time Currie was allowed to exit the penalty box for his fighting major, Jan Drozg stepped right in to serve a too many men on the ice bench minor. Hershey’s used this late-period power play to score the game’s winning goal. Max Lagacé denied a flurry of chances and then laid on his side in an attempt to cover the puck. Before the official blew the whistle, Matt Mouslon shoveled the puck out from underneath the Penguins’ goalie for the go-ahead goal with 3:07 left in regulation.

Shane Gersich wrapped things up for Hershey with an empty-net tally with 6.7 seconds left.

Wilkes-Barre/Scranton’s next game is Wednesday, Mar. 31 against the Binghamton Devils. Puck drop between the Penguins and Devils is scheduled for 7:00 p.m. at RWJBarnabas Health Hockey House in Newark, New Jersey. The Penguins’ next home game is Saturday, Apr. 10 and is also against the Devils. Fans who wish to attend Wilkes-Barre/Scranton home games in April should stay tuned for updates on wbspenguins.com.