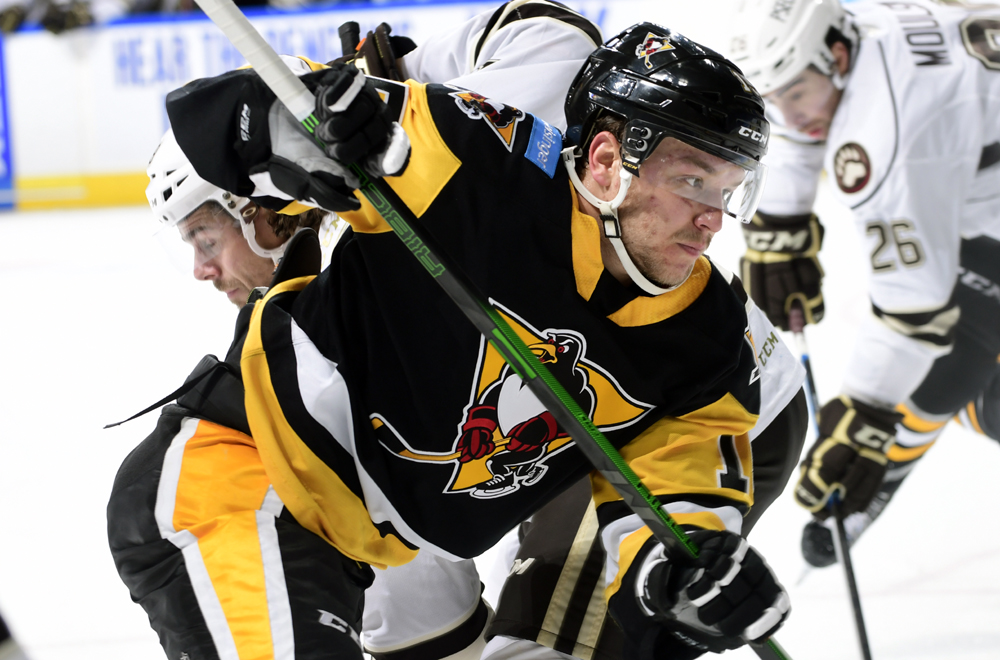 Wilkes-Barre/Scranton on the cusp of getting over the hump

Wednesday, Mar. 24 – PENGUINS 3 vs. Syracuse 6
Wilkes-Barre/Scranton found itself behind the eight ball early, allowing a hat trick to Gemel Smith and surrendering six goals in the game’s first 14 minutes. The Penguins’ top line tried to spearhead a comeback, as Josh Currie, Tim Schaller and Nick Schilkey scored the team’s three goals. Currie and Schaller both notched a goal and two assists each.

Friday, Mar. 26 – PENGUINS 1 vs. Hershey 3
The Penguins and Bears engaged in a physical, grind-it-out game with little room for mistakes. Ultimately, a third-period power-play goal by Matt Moulson sunk Wilkes-Barre/Scranton. Alex D’Orio was solid in net, denying 23 shots in his first start of the season. Jordy Bellerive tallied the Penguins’ lone goal.

Sunday, Mar. 28 – PENGUINS 1 at Hershey 3
The Penguins and Bears engaged in a physical, grind-it-out game with little room for mistakes. Ultimately, a late, third-period power-play goal by Matt Moulson sunk Wilkes-Barre/Scranton. Déjà vu? Max Lagacé played his first game in over three weeks and didn’t miss a beat with 27 stops. Schaller scored the Penguins’ only goal.

Wednesday, Mar. 31 – PENGUINS at Binghamton
Wilkes-Barre/Scranton looks to return to its winning ways by tripping out to Newark, NJ. The Devils were the last team the Penguins beat, a 6-3, come-from-behind victory. Former Penguin Ben Street leads the Devs with five goals and 14 points.

Saturday, Apr. 3 – PENGUINS at Lehigh Valley
The Penguins pay another visit to PPL Center, a building in which offense has been in abundance. Both games the Penguins played in Allentown this season ended in OT by scores of 5-4. Jordy Bellerive has four points (2G-2A) at PPL Center this season.

– Five of Schaller’s six goals and 10 of his 12 points on the season were recorded on home ice.

– Cam Lee is tied atop the league for the most assists among rookie defensemen (8).

– Of Jordy Bellerive’s 18 career goals, 10 have come in the third period or overtime. 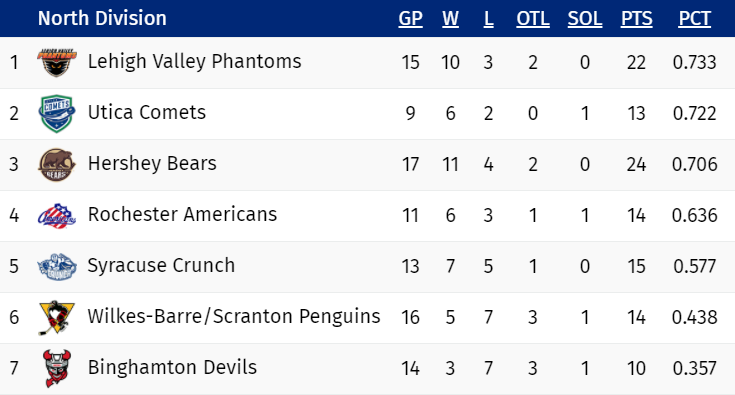 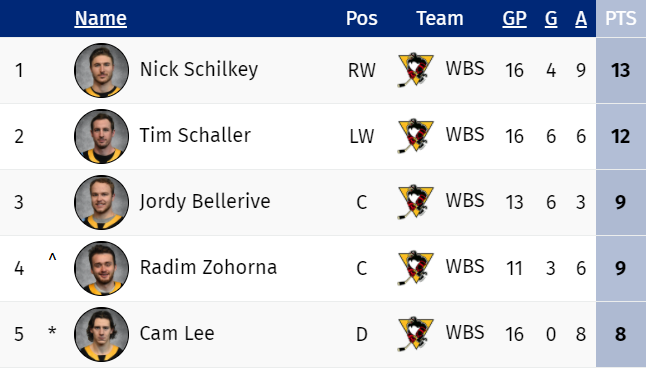