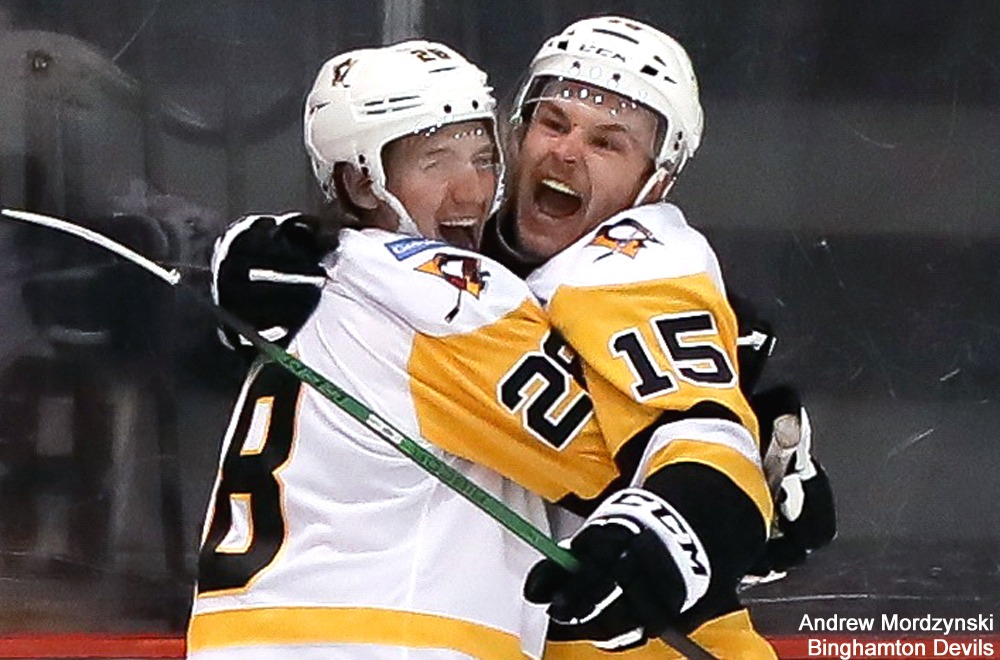 NEWARK, N.J. – Jordy Bellerive scored with 17.4 seconds left in overtime to give the Wilkes-Barre/Scranton Penguins a 3-2 win over the Binghamton Devils at RWJBarnabas Health Hockey House on Wednesday.

The victory improved Wilkes-Barre/Scranton to 6-7-3-1 on the season and put an end to the team’s seven-game winless streak.

With little time left in OT, Alex D’Orio denied Graeme Clark streaking through the slot and to the crease. Bellerive took the puck off D’Orio’s pads and went coast-to-coast before rifling the game-winner into the Devils’ net.

The game-winner was Bellerive’s team-leading seventh goal of the season.

Back at the start of the contest, Binghamton struck just 28 seconds into the game. Unfazed, the Penguins proceeded to carry play throughout the majority of the first period. They ultimately out-shot the Devils, 15-7, in the opening frame, with the 15th shot being a tying goal from Jan Drozg with 3:30 left before the intermission.

Wilkes-Barre/Scranton seized its first lead of the night with a five-on-three power-play goal by Nick Schilkey at 12:12 of the second period.

The Penguins ran roughshod over the first half of the third period, once again peppering the Devils’ net-front with shots. Gilles Senn turned in an incredible period to keep Wilkes-Barre/Scranton from increasing its one-goal lead.

Thanks to Senn’s heroics, Binghamton kept the game close enough to pull the goalie for an extra attacker late in regulation. Nolan Foote buried a rebound with 1:39 left in regulation to force overtime, where Bellerive put the final nail in the coffin.

D’Orio made 22 saves and recorded his first AHL win. Senn made 40 saves, but was handed the overtime loss.

Wilkes-Barre/Scranton’s next game is Saturday, Apr. 3 against the Lehigh Valley Phantoms. Puck drop between the Penguins and Phantoms is scheduled for 7:05 p.m. at PPL Center. The Penguins’ next home game is Saturday, Apr. 10 and will also be against the Binghamton Devils. Tickets to Wilkes-Barre/Scranton home games in April will be available to the general public on Monday, Apr. 5.