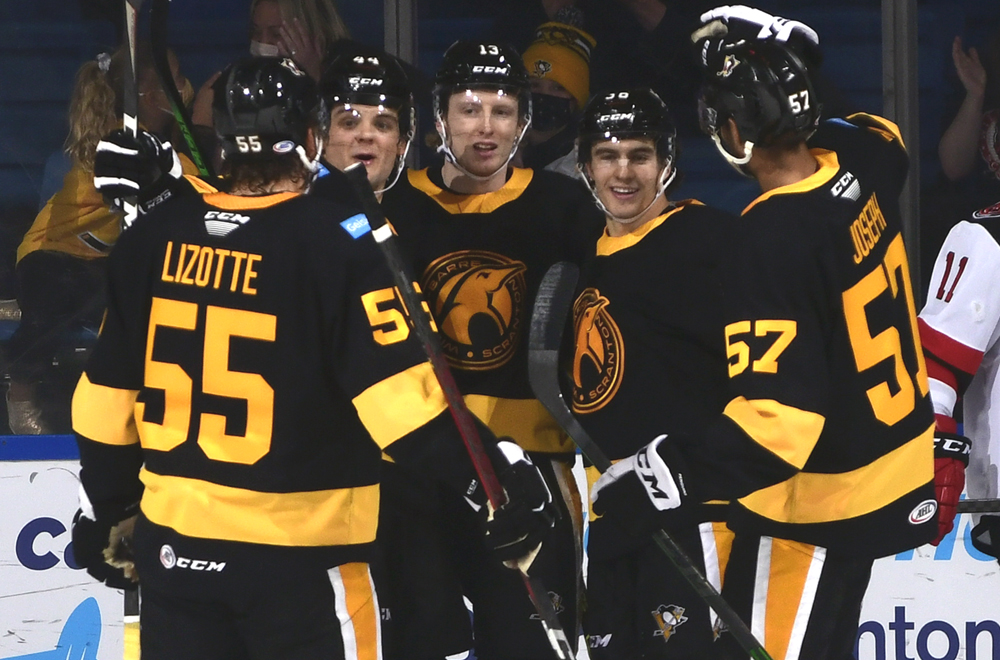 WILKES-BARRE, Pa. – Jordy Bellerive once again proved his knack for clutch scoring by burying the overtime game-winner for the Wilkes-Barre/Scranton Penguins in a 5-4 triumph over the Binghamton Devils on Saturday at Mohegan Sun Arena at Casey Plaza.

Bellerive’s team-leading eighth goal of the season was also his second OT-winner this year. Now 12 of his 20 goals as a pro have come in the third period or overtime, and his latest tally improved Wilkes-Barre/Scranton to 7-7-3-2 on the season.

Binghamton struck first and carried a 1-0 lead into the first intermission on a goal by Nate Schnarr. The ensuing period featured much more scoring, starting with an early strike by Nolan Foote to put the Devils up, 2-0.

Justin Almeida outraced the Devils to an open area in the slot where Jonathan Gruden fed him for the Penguins’ first goal of the night at 6:17 of the middle frame. However, less than three minutes later, Schnarr’s second of the night put Binghamton back up by two.

With time whittling away in the second period, Félix Robert turned the tide with an extra-effort play that led to Wilkes-Barre/Scranton slashing its deficit in half. Robert dove ahead to disrupt Binghamton’s breakout, and the puck rolled back to the Penguins rookie. Robert steadied himself enough to launch a backhander past Gilles Senn with 22.2 second left in the frame.

Wilkes-Barre/Scranton faced a penalty kill late in the tied third period, but quickly turned that negative into a positive with its first shorthanded tally of the season. After Gruden was initially denied on a shorthanded rush, he fed Chase Berger atop the crease for a go-ahead goal with 3:36 left in regulation.

The Devils did not go quietly, scoring with an extra attacker to force overtime.

After handling another tense penalty kill in overtime, the Penguins won the game thanks to Bellerive’s latest demonstration of crunch-time offense.

Max Lagacé made 17 saves in the win, while Senn turned aside 32 shots.

Wilkes-Barre/Scranton’s next game is tomorrow, Sunday, Apr. 11, a 3:00 p.m. matinée matchup with the Hershey Bears at Giant Center. The Penguins’ next home game is Friday, Apr. 16 against the Lehigh Valley Phantoms. Puck drop between the Penguins and Phantoms is slated for 7:00 p.m. Tickets to Wilkes-Barre/Scranton’s remaining home games in April are available to the general public now and can be purchased by calling (570) 208-7367.