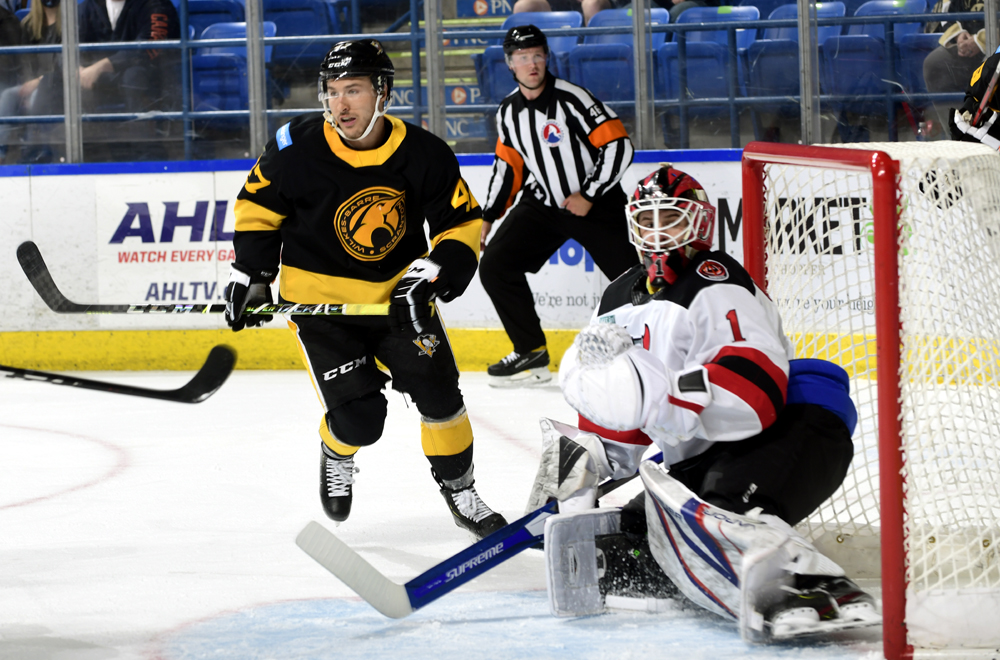 WILKES-BARRE, Pa. – The Wilkes-Barre/Scranton Penguins were stifled by a young goaltender making his pro debut and were delivered a 6-3 loss by the Binghamton Devils on Friday night at Mohegan Sun Arena at Casey Plaza.

Wilkes-Barre/Scranton (7-9-3-2) received multi-point outings from three of its top players – Josh Currie (1G-1A), P.O Joseph (2A) and Drew O’Connor (2A) – but it wasn’t enough to dent Devils goalie Mareks Mitens enough times to get the win. A number of post-to-post saves by Mitens robbed the Penguins as they attempted to forge a comeback.

Binghamton got on the board first with Nate Schnarr’s first goal of the night, a one-timer on the power-play at 4:11 of the opening frame.

Wilkes-Barre/Scranton responded with a power-play goal of their own late in the first period. O’Connor passed on a rebound opportunity and instead dished the puck to Tim Schaller at the net-front for the tying goal in Schaller’s 200th AHL game.

The Penguins seized a 2-1 lead on a shorthanded snipe by Jon Lizotte at 4:24 of the second stanza. However, the Devils rattled a trio of goals to turn that 2-1 deficit into a 4-2 lead.

The Devils’ rally started with A.J. Greer scoring on the rush midway through the middle frame. Fifty-nine seconds later, Schnarr scampered past the Penguins defense and beat Tommy Nappier on a mini-break while falling down. Kevin Bahl ripped a shot off the far-post and in at 14:02 of the second.

Currie unleashed a sinister release during an early third-period power-play that went bar-down and pulled the Penguins within one, but Ben Thompson swiftly reestablished the Devils’ two-goal lead less than a minute later on a delayed-penalty, extra-attacker situation.

Danick Martel sealed the win for Binghamton with an empty netter at 19:23 of the third.

Mitens made a handful of tremendous stops throughout the second period and again in the late stages of the third, denying Wilkes-Barre/Scranton any hope of a comeback. Binghamton’s netminder was credited with 33 saves, while Nappier turned aside 16 bids in what was also his pro debut.

Wilkes-Barre/Scranton’s next game is tomorrow, Saturday, Apr. 16, when it travels to Upstate New York to challenge the Syracuse Crunch at 7:00 p.m. The Penguins’ next home game is Sunday, Apr. 25 against the Hershey Bears. Puck drop between the Penguins and Bears is slated for 5:00 p.m. Tickets to Wilkes-Barre/Scranton’s remaining home games in April are available to the general public now and can be purchased by calling (570) 208-7367.