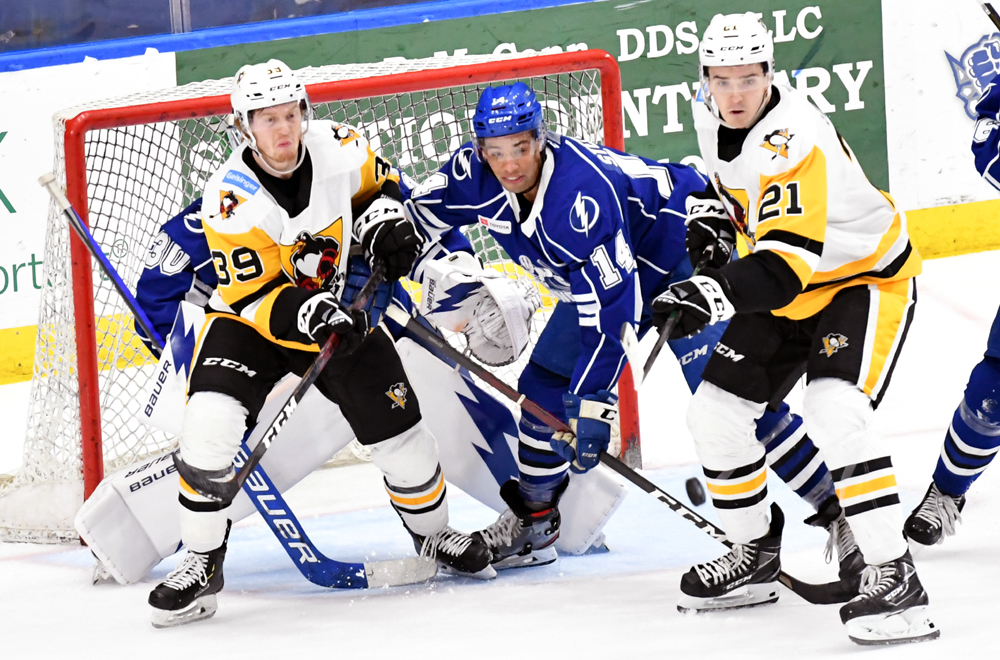 Wilkes-Barre/Scranton (7-10-3-2) engaged in two high-energy, fast-paced periods in the opening 40 minutes, but only ended up with one goal to show for all their hard work. Tim Schaller provided the team’s only tally, while Syracuse skated away with the win.

After a breakneck start with few stoppages, the scoring started roughly midway through the first period. Penguins goalie Alex D’Orio denied Taylor Raddysh on the doorstep, but the Crunch forward smacked the rebound out of midair to give Syracuse the game’s first goal at 9:29 of the opening frame.

Syracuse extended that first-period lead to 2-0 by converting on another second-chance opportunity. D’Orio initially slammed the door on a Gabe Fortier breakaway, but Fortier collected the rebound, dished it Henry Bowlby, who tapped it across the crease to Otto Somppi for the finish with 4:56 left in the period.

Wilkes-Barre/Scranton poured on an unrelenting forecheck to start the second period. Schaller capitalized on a Crunch turnover for his eighth goal of the season at 7:37 of the middle frame. However, Boris Katchouk provided a Bobby Orr-esque response less than a minute later to put Syracuse back up by two.

The scoring chances for both teams stalled in the third period. Syracuse didn’t have a single shot on goal in the final frame until 2:50 left in regulation, when Somppi scored an empty-net goal to seal the win for the Crunch.

D’Orio was credited with 13 saves on 16 shots faced, while Spencer Martin made 24 stops for Syracuse.

Wilkes-Barre/Scranton’s next game is Saturday, Apr. 24, when it takes on the Hershey Bears at Giant Center at 1:00 p.m. The Penguins’ next home game is Sunday, Apr. 25, also against the Bears. Puck drop between the Penguins and Bears is slated for 5:00 p.m. Tickets to Wilkes-Barre/Scranton’s remaining home games in April are available to the general public now and can be purchased by calling (570) 208-7367.