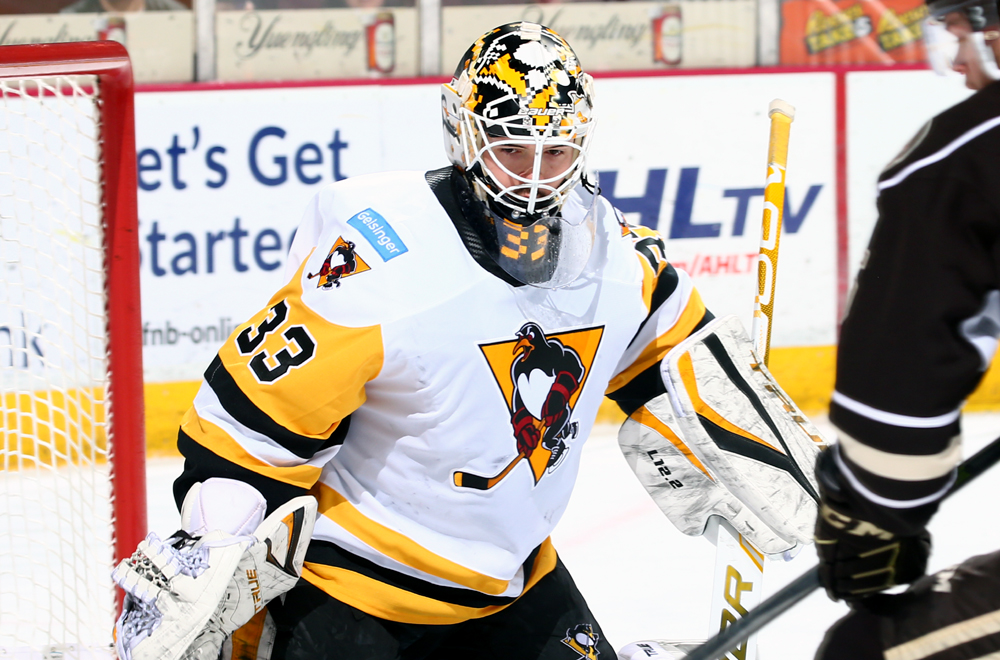 HERSHEY, Pa. – The Wilkes-Barre/Scranton Penguins stumbled late and were ousted by the Hershey Bears, 3-1, on Saturday afternoon at Giant Center.

Wilkes-Barre/Scranton (7-11-3-2) played to a 0-0 deadlock through the first two periods until the game opened up in the final frame. After the Penguins failed to convert on a third-period penalty shot, the Bears cashed in the game-winning goal with 3:30 left in regulation.

Axel Jonsson-Fjällby finally broke the 0-0 tie four minutes into the third period. A knuckling puck found its way to Jonsson-Fjällby’s stick, whose shot ricocheted off a Penguins defenseman and in for the game’s first goal.

Wilkes-Barre/Scranton pulled even with a power-play goal at 8:27 of the third period. Anthony Angello, who was recently reassigned by the Penguins’ NHL affiliate in Pittsburgh, won a battle along the boards and kicked the puck down to Drew O’Connor. The rookie drove along the goal line to the net-front and beat Bears goaltender Zach Fucale down low, making it 1-1.

With 5:51 left in the final frame, Jonathan Gruden was awarded a penalty shot. It was the first penalty shot of the season for the Penguins, but it proved unsuccessful as Gruden was turned away by Fucale.

Two minutes after the failed penalty shot attempt, Alex Alexeyev rifled a shot underneath the crossbar and gave Hershey a 2-1 edge. Brian Pinho used an empty-net goal to bring the contest to its final score with 0.3 left on the clock.

Wilkes-Barre/Scranton finished the afternoon perfect on special teams, having converted on its only power play of the day and going three-for-three on the penalty kill.

Penguins goalie Alex D’Orio denied 24 of the 26 shots thrown his way, while Fucale recorded 31 saves for the Bears.

Tickets for the Penguins’ home games in May will go on sale for the general public on Monday, Apr. 26 at 10:00 a.m.