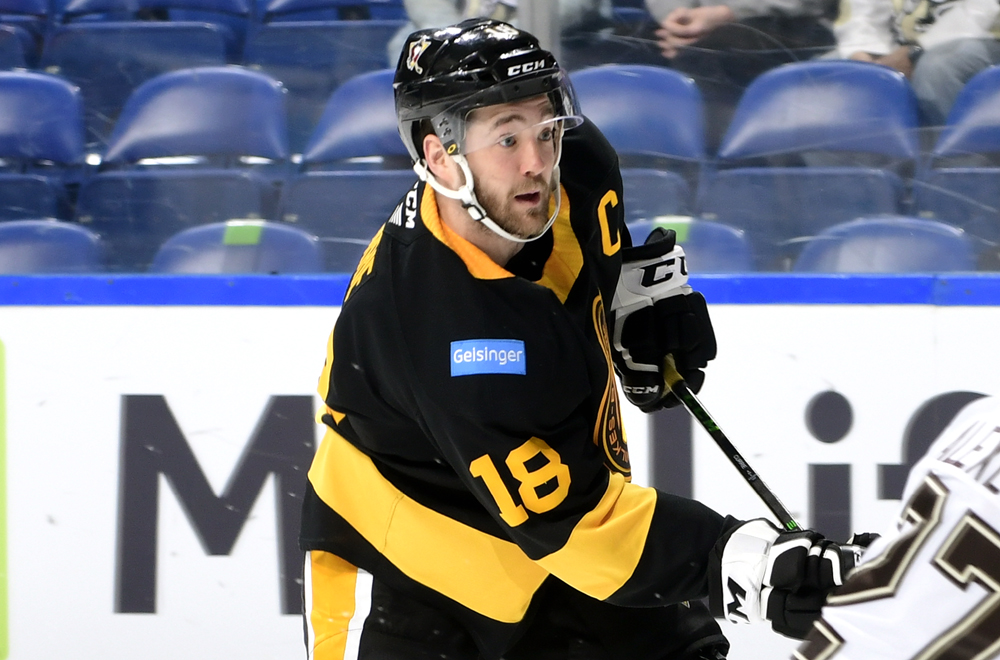 WILKES-BARRE, Pa. – Wilkes-Barre/Scranton Penguins captain Josh Currie led the way for his team in a 6-3 victory over the Hershey Bears on Sunday evening at Mohegan Sun Arena at Casey Plaza.

Wilkes-Barre/Scranton (8-11-3-2) received multi-point performances from a quartet of players, but none more impactful than Currie’s three-point outing. The Penguins’ captain tallied twice, including the game-winning goal, and added an assist for good measure.

Hershey got on the board first using a power-play goal by Philippe Maillet at 8:31 of the opening frame.

The Penguins answered Maillet’s opening tally six minutes later on a sharp-angle shot by Chase Berger. After Will Reilly’s drive from the point went wide of the net, the puck kicked off the end boards back to Berger, who shuttled it over a scrambling Pheonix Copley.

Currie put the Penguins in a 2-1 lead on a sniper’s release with 1:31 left in the first period.

The Bears evened the scales at two goals apiece just 52 seconds into the middle frame on a similar goal to the one Berger scored in the first. Matt Moulson collected a big shot off the back wall and pushed it past the Penguins’ unsuspecting goalie, Alex D’Orio

Jonathan Gruden put Wilkes-Barre/Scranton ahead again, 3-2, on a pass that deflected off a Hershey defender and trickled past Copley at 8:17 of the second period. However, the Bears equalized once more with a shorthanded strike by Axel Jonsson-Fjällby.

Granted a two-man advantage late in the second stanza, Currie buried his second goal of the night. The five-on-three power-play goal gave the Penguins a 4-3 lead, and they didn’t look back from there.

Jon Lizotte provided a two-goal cushion at 4:24 of the third period, and Anthony Angello delivered the dagger with a missile tucked underneath the crossbar at 15:40 of the final frame.

Hershey did not surrender easily, amassing 16 shots in the third period, more than their first and second period totals combined. D’Orio was up to the task, denying all 16 bids to maintain his team’s lead. D’Orio and Copley both finished the game with 26 saves.

In addition to Currie’s three points, the Penguins saw multi-point efforts from Gruden (1G-1A), Drew O’Connor (2A) and Kyle Olson (2A).

Tickets for the Penguins’ three home games in May will go on sale for the general public tomorrow, Monday, Apr. 26, at 10:00 a.m.