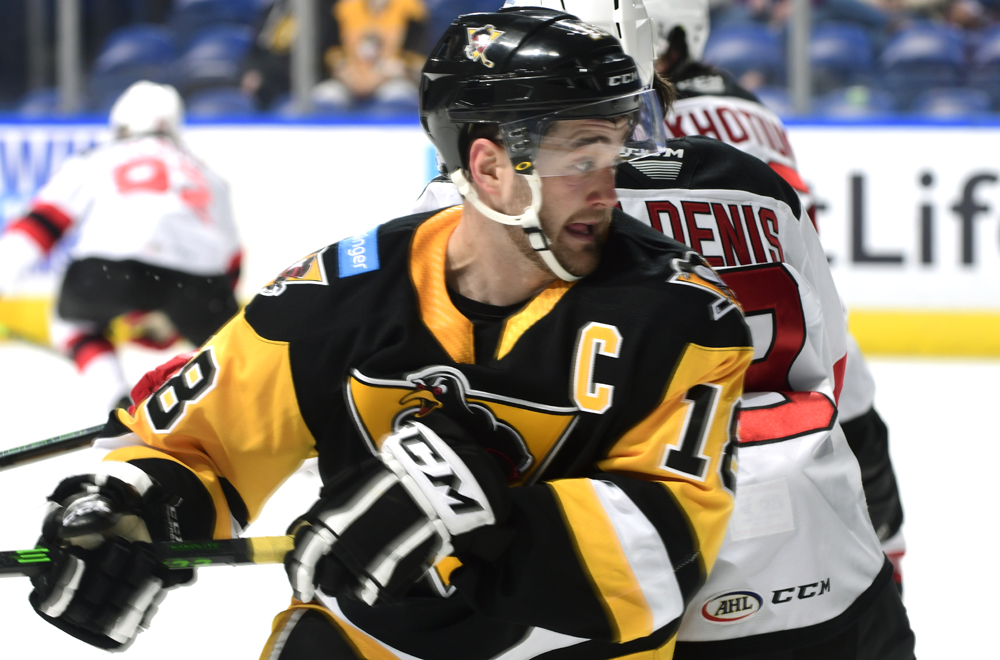 WILKES-BARRE, Pa. – The Wilkes-Barre/Scranton Penguins marched their way to a 6-3 triumph over the Binghamton Devils on Wednesday night at Mohegan Sun Arena at Casey Plaza.

Wilkes-Barre/Scranton (11-11-4-2) earned a point in the standings for the fifth-straight game, thanks in large part to the two-goal, one-assist outings by forwards Josh Currie and Anthony Angello.

Binghamton struck first on a goal by Fabian Zetterlund 4:17 into the game, but Wilkes-Barre/Scranton had a swift response. Just 42 seconds later, Jordy Bellerive knotted things up, 1-1.

Currie’s first goal of the night gave the Penguins their first lead of the contest. The Penguins’ captain got loose for a shorthanded breakaway and delivered a dart under the glove of Evan Cormier at 16:06 of the opening frame.

Early in the second period, Angello extended that lead to 3-1. Angello uncorked an unholy one-timer from the left-side half-wall that sizzled past Cormier to put the home side up by two goals.

The Devils clapped back 15 seconds later with a power-play goal by A.J. Greer.

Undeterred, Wilkes-Barre/Scranton worked to reestablish its two-goal edge midway through the second stanza. Currie got a piece of a shot from Cam Lee and steered it under the crossbar for his second goal of the game.

Tim Schaller tucked in a man-advantage marker six minutes into the third period, running the Penguins’ lead to 5-2, only to see the Devils respond with another power-play goal at 12:43 of the final frame.

Amidst a final seven minutes filled with fisticuffs and plenty of bad blood boiling over after the whistles, the Penguins locked down their defensive zone, and Angello sealed the win with an empty-netter.

Other multi-point performers for the Penguins included Bellerive (1G-1A), Lee (2A), Drew O’Connor (2A) and Pierre-Olivier Joseph (2A).

Alex D’Orio recorded 21 saves for his fourth win in a row, while Cormier was handed the loss with 23 stops to his name.