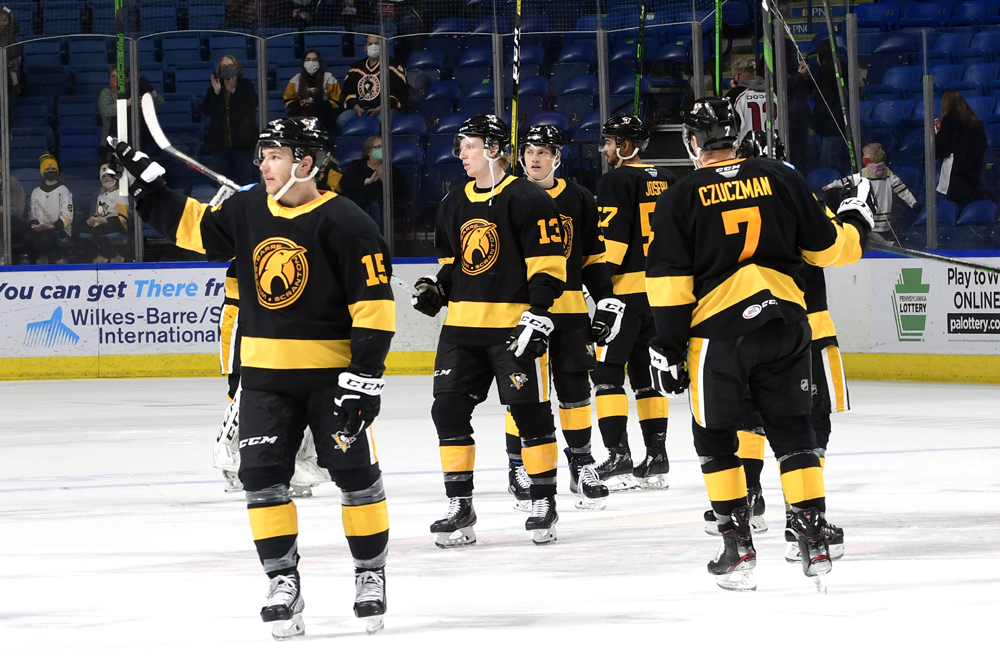 WILKES-BARRE, Pa. – In their final home game of the 2020-21 season, the Wilkes-Barre/Scranton Penguins gave their fans a reason to celebrate with a 4-1 win over the Binghamton Devils on Saturday night at Mohegan Sun Arena at Casey Plaza.

Wilkes-Barre/Scranton (12-11-4-2) ran its point streak to six games on the back of a two-goal outing from Nick Schilkey and a “Gordie Howe Hat Trick” by rookie Jonathan Gruden. Another rookie, goaltender Tommy Nappier, played a key role in the victory as well, stopping 22 shots for his first win as a pro.

Nappier was locked in from the start, turning aside an early flurry of scoring chances for Binghamton. Both teams traded looks throughout the first period, but a 0-0 tie persisted into the middle frame.

Schilkey broke the deadlock at 8:24 of the second period. A long shift in the Devils’ zone ended with Gruden making a shrewd pass to set up Schilkey for the one-timer.

Schilkey scored his second of the game at 9:43 of the third period, depositing a rebound for a power-play goal.

Anthony Angello ran the Penguins’ lead to 3-0 on a tremendous individual effort that started in his team’s defensive end. Angello knifed the puck away from Devils forward Graeme Clarke along the right-side boards, and then outraced every Binghamton defender through the neutral zone to earn a point-blank chance on Evan Cormier. Angello buried his opportunity with a devastating snap shot at 12:16 of the third period.

Clarke spoiled the party momentarily by ruining Nappier’s shutout bid with 2:05 left in regulation, but the crowd leapt back to its feet shortly thereafter when Gruden completed the Gordie with an empty-net goal.

Wilkes-Barre/Scranton’s has three road games remaining to close out the 2020-21 season. The Penguins’ next game is tomorrow, Sunday, May 9 against the Lehigh Valley Phantoms. Puck drop between the Penguins and Phantoms is scheduled for 3:05 p.m. at PPL Center.