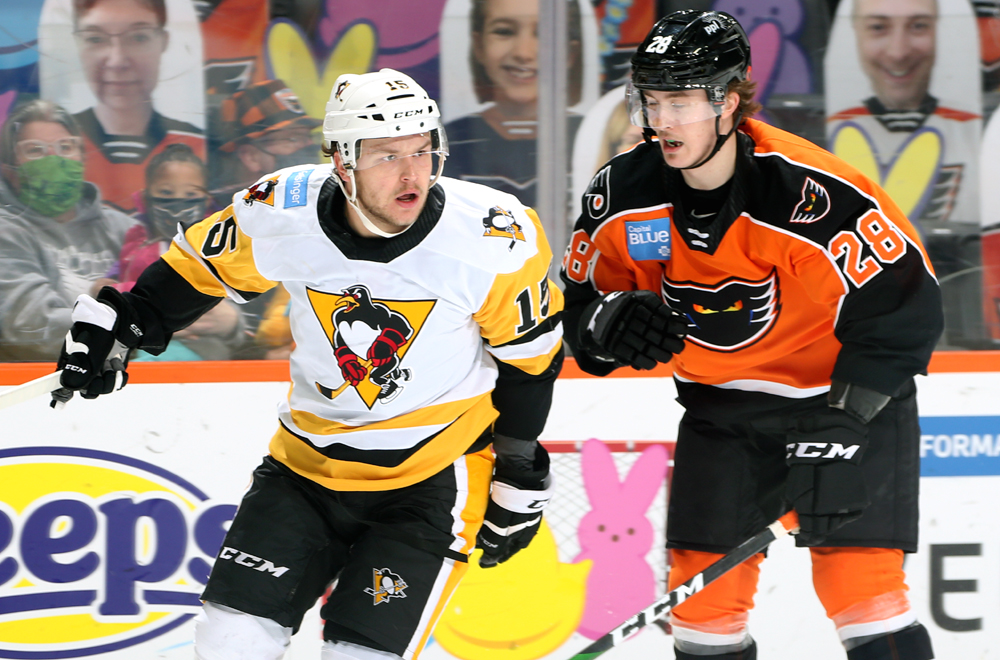 ALLENTOWN, Pa. – The Wilkes-Barre/Scranton Penguins lost to the Lehigh Valley Phantoms, 6-2, in a Sunday matinée at PPL Center.

Wilkes-Barre/Scranton (12-12-4-2) saw its six-game point streak come to an end at the hands of its in-state rival, who scored early and often to run away with the win.

Brennan Saulnier single-handedly granted the Phantoms a 3-0 lead by scoring a hat trick in the first 10 minutes of contest. Saulnier scored his first at 2:03 of the opening frame, followed that up with a redirect goal at 5:28, and capped off the hat trick with a long-range shot at 9:55.

The Penguins received a timely goal from Félix Robert late in the first period, providing the team with a spark before the first intermission.

Lehigh Valley reassumed its three-goal lead on a strike by Tanner MacMaster at 1:43 of the second period. Less than three minutes later, Chris Mueller deposited a power-play goal to make it 5-1.

Playing in his 800th AHL game, Mueller notched another man advantage marker at 3:26 of the third period. Once again, the Penguins showed some life by converting on a power play later in the frame. Wilkes-Barre/Scranton worked hard to wreak havoc around Lehigh Valley’s crease, and amidst the mayhem, Josh Currie found a loose puck and shoved it in at 7:42.

The Penguins came no closer to infringing upon the Phantoms’ lead, despite out-bidding Lehigh Valley in the third period, 11-2.

Tommy Nappier turned aside 20 shots while manning the crease for the Penguins, whereas Zane MacIntyre earned the win with 29 saves.

Wilkes-Barre/Scranton has a pair of road games remaining to close out the 2020-21 season. The Penguins’ next game is once again against the Lehigh Valley Phantoms on Saturday, May 15. Puck drop for the penultimate game of the season is scheduled for 7:05 p.m. at PPL Center.