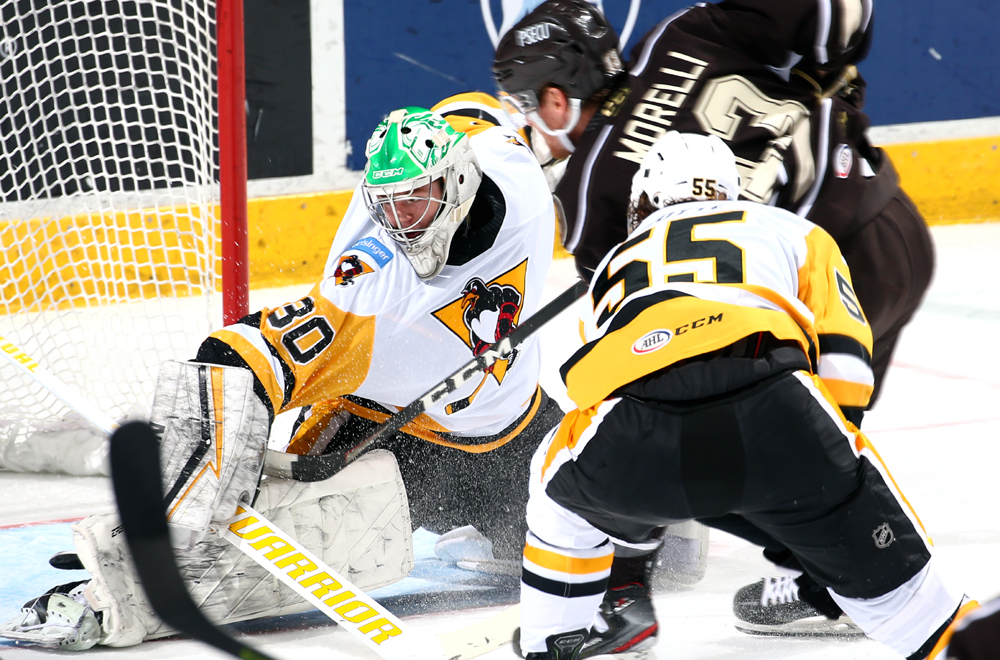 HERSHEY, Pa. – The Wilkes-Barre/Scranton Penguins fell in their season finale, 5-2, against the Hershey Bears at Giant Center on Sunday.

Wilkes-Barre/Scranton (13-13-4-2) engaged in a fiery contest with its oldest rival, featuring four different fights and 94 combined penalty minutes. When the dust settled from all the chaos, three power-play goals by the Bears and a four-point game from Connor McMichael lifted them to victory.

Brett Brochu was tabbed as the Penguins’ starter for the season finale and set a record in the process. At 18-years and 249-days-old, he became the youngest player to suit up for a game in Wilkes-Barre/Scranton history.

A tip-in on the man-advantage by McMichael gave the Bears a 1-0 lead at 7:37. Four minutes later, Matt Moulson doubled the lead with another power-play goal.

Brett Leason ran the Bears advantage to 3-0 early in the second period, but the Penguins quickly turned the tide. A power-play goal by Drew O’Connor was swiftly followed by a strike from Cam Lee, cutting Wilkes-Barre/Scranton’s deficit down to one.

Lee dropped the gloves with Mason Morelli after the Bears’ forward trucked into Brochu, and the fighting major completed a second-period Gordie Howe hat trick for the rookie defenseman.

The third period featured more fisticuffs and a pair of ejections for the Bears, as Kale Kessy and Matt Moulson were told to hit the showers early.

Eddie Wittchow reestablished a two-goal cushion for Hershey midway through the third period, and a five-on-three power-play goal by Leason late sealed the Penguins’ fate.

Brochu ultimately made 31 saves in his pro debut, while Bears goalie Hunter Shepard turned away 34 bids.

Wilkes-Barre/Scranton will return to the ice in October for the 2021-22 season. Fans can become season ticket members for the upcoming 23rd season of Penguins hockey by contacting the team’s front office directly at (570) 208-7367.