CARTER THE CENTER OF ATTENTION 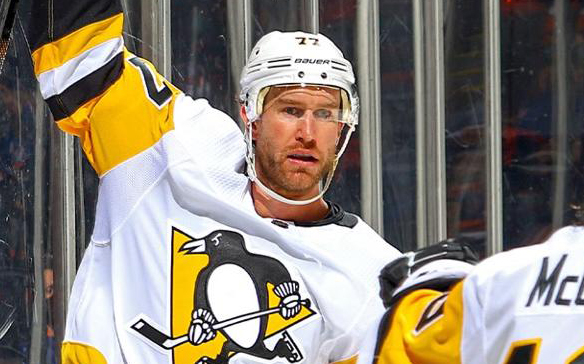 The Pittsburgh Penguins made exactly one move at the National Hockey League’s trade deadline, picking up veteran forward Jeff Carter from the Los Angeles Kings for a pair of mid-round picks in the 2022 and 2023 drafts.

So far, the move looks like the steal of the century for general manager Ron Hextall.

Carter made an immediate impact on the Pens during the regular season, netting nine goals in just 14 games.  That’s one more goal than he had scored in 40 games with the Kings.

And he hasn’t slowed down in the postseason, either.

Carter has posted three goals in the first three games of the opening round series with the New York Islanders – the only Pittsburgh skater with multiple tallies.

Carter notched the game-winning goal in Game Two, and picked up two goals in a Game Three victory.

Carter’s prominent play has coe while playing center for the Pens, at times suiting up on the second line when Evgeni Malkin’s been out with injury, or on the third line when he’s been in.

But that was a bit of a change from his recent time in LA, where he had been playing on the right wing.

“Our intent was to play him at center and see how that goes, but understanding that he’s a real versatile player that we could utilize in so many different ways,” head coach Mike Sullivan stated.   “By moving him into the middle we thought it would make us that much deeper at the center position.  He’s a natural center, he’s played it most of his career.”

But scoring goals isn’t the only important part of playing center.

“We were well aware of what his strength is there, he’s a real good faceoff guy, and he’s just a real smart player.  He can play at both ends of the rink,” said Sullivan.  “But we also understood that nothing’s set in stone, and he would give us a lot more versatility throughout out lineup.”

From the top down, the Penguins have what is arguably the best depth at center in the NHL, with Sidney Crosby, Malkin, Carter and Teddy Blueger lining up in the middle of the ice.

“It’s tough to play against when you have four lines like that, that deep at the center position,” said Zach Aston-Reese.  “I’m sure it gives coach a lot of confidence.  It gives the players a ton of confidence too.  Every line is very capable of scoring goals.”

Jason Zucker, who picked up his first goal of the postseason in Game Three, also likes what he sees at center.

“All four of our center men are incredible players,” Zucker stated.  “It’s something that we have to make sure we’re leaning on and using those guys in every facet we can.”