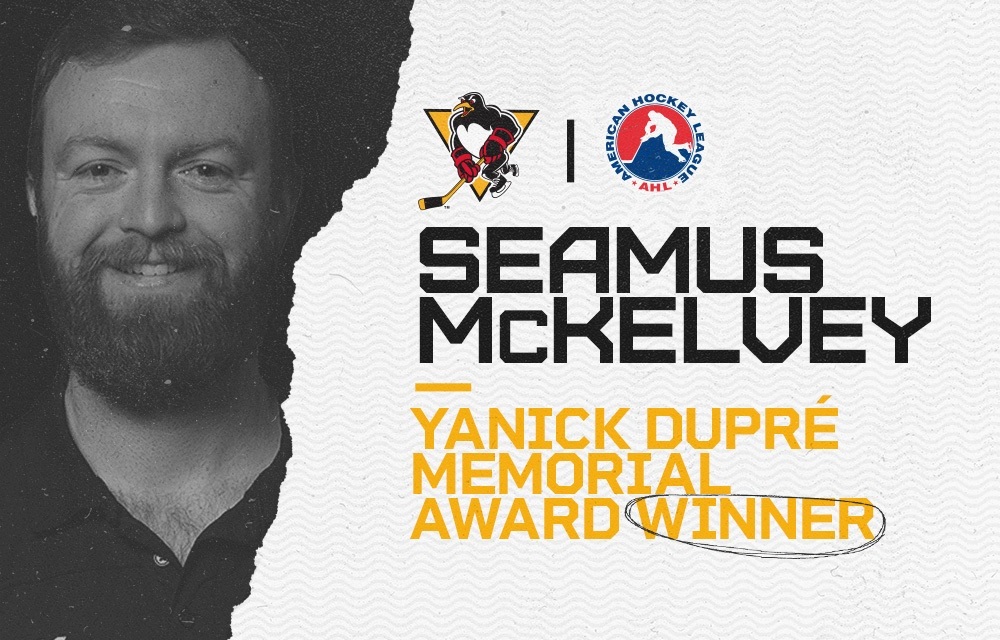 WILKES-BARRE, Pa. – The American Hockey League announced today that, in recognition of his efforts during the pandemic, Wilkes-Barre/Scranton Penguins head athletic trainer Seamus McKelvey has been selected among the winners of the Yanick Dupré Memorial Award for 2020-21.

In addition to their day-to-day responsibilities of looking after the general health of their players – including the preventions, treatment and rehabilitation of injuries – these athletic trainers and therapists took on the additional duties of testing, monitoring and administering the AHL’s COVID-19 health and safety protocols, allowing the league to operate in a safe and effective manner during the pandemic.

The AHL also acknowledges the assistant athletic trainers, equipment managers and staffs, and team doctors and medical staffs whose tireless efforts contributed to a successful year.

The winners of the Yanick Dupré Memorial Award are:

The AHL’s annual Man of the Year award is named after Yanick Dupré, who passed away in 1997 at the age of 24 following a 16-month battle with leukemia. A second-round draft pick of the Philadelphia Flyers in 1991, Dupré played four seasons in the AHL with the Hershey Bears and was an AHL All-Star in 1995.

Season tickets for the upcoming 2021-22 season are on sale now. Wilkes-Barre/Scranton Penguins fans can secure their seats by calling the team’s front office directly at (570) 208-7367.