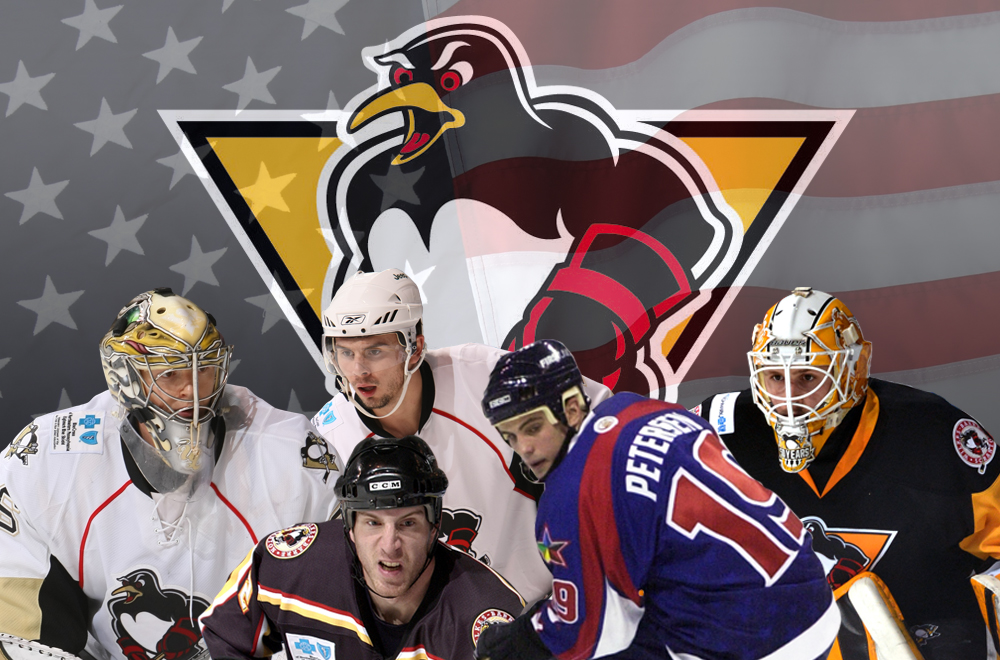 WILKES-BARRE, Pa. – This past weekend, we all kicked back, cooked out and celebrated the United States Independence, as well all love to do when the 4th of July comes around. But now that the patriotic holiday is in the rearview mirror, it doesn’t mean that we have to stop celebrating American greatness.

The Wilkes-Barre/Scranton Penguins have had players from 21 different countries wear their sweater with pride over the team’s history, and 171 Penguins were born in the U-S-of-A. We’re using this occasion to look back on some of the best American players to suit up for Wilkes-Barre/Scranton.

The following players are not ranked in any specific order, but they all made their mark on the franchise and its fans during their time with the black and gold:

Toby Petersen joined Wilkes-Barre/Scranton during its second season, the 2000-01 campaign. The unheralded ninth-round draft pick of the Pittsburgh Penguins breathed life into the team’s offense almost immediately. As a rookie, Peterson led the team with 26 goals and 67 points. He was named to the All-Rookie Team and represented the Penguins on home ice during the 2001 AHL All-Star Classic.

Petersen didn’t stop there, and the native of Minneapolis, Minnesota ended up becoming the most productive U.S.-born player in franchise history. His 177 points with the Penguins rank first among Americans and tied for second overall. Furthermore, he’s the only American to achieve over 100 assists during his Wilkes-Barre/Scranton tenure.

Petersen may have the most points and assists by American-born Penguins, but the goals crown belongs to the pride of Anchorage, Alaska, Tim Wallace. By posting 75 goals across parts of five seasons with Wilkes-Barre/Scranton, Wallace has the third-most tallies in team history and the most by an American.

A relatively modest but always reliable player in his first two seasons, Wallace erupted in his final two years with the black and gold. He paced the team with 27 goals in 2009-10 and then went off for 20 goals again the next season. During this time, Wallace was steadily converting for clutch scoring too, as 12 game-winning goals is the team record for U.S.-born players.

Wallace also ended up being one of the most tenured Penguins in history. He logged 304 games played, which is third all-time but one-game shy of the team record for Americans…

The American who played the most games for the Wilkes-Barre/Scranton Penguins is Rob Scuderi with 305 contests. During that time, Scuderi would never be mistaken for an offensive defenseman – he produced just eight goals in those 300-plus games and added two more in 41 playoff tilts. However, the Syosset, New York native was an unwavering beacon of shutdown defense.

After winning an NCAA National Championship in his senior season at Boston College, Scuderi started clogging lanes and blocking shots in the AHL as a Penguin. His development was a slow and steady one, but eventually, his underrated defensive prowess earned him opportunities in Pittsburgh. While in the NHL, Scuderi became a go-to guy on penalty kills or when protecting a one-goal lead late in games. He lifted the Stanley Cup twice as a key cog in Pittsburgh’s championship in 2009 as well as the Los Angeles Kings’ in 2012.

There was absolutely nothing underrated or underappreciated about what Jake Guentzel did in his short time in Wilkes-Barre/Scranton. After taking a few games to feel out the pro ranks on an amateur tryout at the tail end of the 2015-16 season, the skinny, baby-faced Minnesotan played like a man amongst boys in the Calder Cup Playoffs.

The Penguins scored 12 goals in their first-round sweep of the Providence Bruins that year. Guentzel had a point on seven of those 12 goals, including the series-clinching overtime game-winner.

Jake From State Farm proved that his postseason outburst was no fluke the following season, routinely dazzling fans and tormenting opponents. Guentzel was ultimately named to the All-Rookie Team for the  2016-17 season despite playing in less than half of Wilkes-Barre/Scranton’s games that season.

His AHL career wrapped up with 23 goals and 25 assists for 48 points in 44 regular season games and 14 points (5G-9A) in 10 playoff games, all while registering only six minor penalties. En route to capturing the Stanley Cup with Pittsburgh in 2017, Guentzel set a new record for an American-born rookie in the Stanley Cup Playoffs with 21 points.

Brooks Orpik was one of the first major Pittsburgh prospects to come through Wilkes-Barre/Scranton when he turned pro in 2001-02. The NHL Penguins wanted him groomed into a physical, stalwart defender, and what better place to embark on that path than Wilkes-Barre/Scranton?

As a rookie, Orpik fell one penalty minute shy of 100. He then eclipsed 100 PIMs in his sophomore year. Neither of those totals were good enough to lead the team in that era, but opponents felt the hurt of his charitable distribution of hits just the same.

Like Scuderi, Orpik won the Stanley Cup twice; once as a Penguins in 2009 and once with the Washington Capitals in 2017. Born in San Francisco, California but raised in Boston, Massachusetts, Brooks Orpik wound up playing over 1000 NHL games, earned an estimated $51 million and earned the opportunity to represent the United States at two Winter Olympics (2010, 2014).

His first season, 2007-08, was largely spent in Pittsburgh (though 21 points in 27 games is nothing to shake a stick at). However, the next year was unforgettable.

Taffe and Janne Pesonen combined to put forth one of the most impressive offensive exhibitions the franchise had ever seen. Taffe ended up with 75 points (25G-50A) in 74 games. That is the greatest single-season production by an American in Penguins history. In what ultimately amounted to less than a season and a half of action with Wilkes-Barre/Scranton, he clicked at just a hair under a point-per-game pace with 96 points in 101 games.

Adding to his patriotic credentials is the fact that before he turned pro, Taffe was named Mr. Minnesota Hockey in 1999. The prestigious distinction is given annually to the best high school hockey player in Minnesota, often referred to as “The State of Hockey”.

Taffe has his nook of the Penguins’ record book carved out with his dominant 2008-09 campaign, but goaltender John Curry has his name scattered through those pages thanks to a successful career with Wilkes-Barre/Scranton.

Another Minnesotan on this list, Curry decorated his shelves with hardware while with the Penguins. He was named to the AHL All-Rookie Team in 2008 and won the Harry “Hap” Holmes Memorial Award in 2011, the same year that he participated in the AHL All-Star Classic.

Curry sits atop the Penguins all-time wins list with 103 victories. That’s not first among Americans. That’s No. 1, full-stop. Same goes for career playoff wins, a category in which Curry is tied with his longtime goalie partner, Brad Thiessen (18). He also played the most games as a goalie for Wilkes-Barre/Scranton (177) and leads the team’s U.S.-born netminders in shutouts (10).

From the Commonwealth of Pennsylvania, Eric Tangradi began his pro journey with Wilkes-Barre/Scranton in 2009-10. He gradually asserted himself as a power forward and crafty playmaker with the Penguins, and ultimately racked up 60 goals and 61 assists for 121 points in his 178 games with the club.

Tangradi played seven more pro seasons after he was traded by Pittsburgh in 2013, and he maintained his reputation as a steady source of offense while developing into a trusted locker room leader. Tangradi announced his retirement earlier this summer, ending his career with over 600 professional games played and one Calder Cup to his name.

A gifted puck-mover and power-play quarterback, Alex Goligoski had one of the best rookie seasons in team history. Thirty-eight points in 70 games topped the team’s defensemen in 2007-08 and was good enough to earn the Grand Rapids, Minnesota native a spot in the AHL All-Star Classic. However, “Goose” made his biggest impact in the postseason.

During the Penguins’ run to the 2008 Calder Cup Final, Goligoski posted a whopping 28 points. Not only did that lead the team, but it set the AHL’s all-time mark for most points by a defenseman in one playoffs, a record that still stands today. It also tied Mike Sillinger’s 16-year-old record for most points by a rookie in the postseason.

Unsurprisingly, Goligoski split the next season between Pittsburgh and Wilkes-Barre/Scranton, and was on the ice for the Steel City’s Stanley Cup celebration in 2009. Goligoski played 924 NHL games across 14 seasons with Pittsburgh, the Dallas Stars and Arizona Coyotes.

Lastly, we have another recent Penguin joining these ranks. Hailing from Rochester, New Hampshire, Casey DeSmith became an unlikely success story with Wilkes-Barre/Scranton. With practically no pro experience under his belt, DeSmith was signed to a professional tryout agreement by the Penguins from their ECHL affiliate, the Wheeling Nailers, partway through the 2015-16 season. Wilkes-Barre/Scranton’s goaltending stable was ravaged by injuries, call-ups, and overall instability at this point in the year, so DeSmith was placed between the pipes for his first pro start against the Hartford Wolf Pack.

He won. And he looked good doing it.

DeSmith returned to Wheeling shortly thereafter, but after the injury bug sunk its mandibles into Pittsburgh’s goalies prior to the Stanley Cup Playoffs, DeSmith was forced back into AHL action. He seized his opportunity, became the team’s workhorse starter down the stretch and was their No. 1 goalie for the 2016 Calder Cup Playoffs.

In the seasons that followed, DeSmith was named to the AHL All-Rookie Team, added his name to the pantheon of Penguins goalies to win the Harry “Hap” Holmes Award, played in the 2018 AHL All-Star Classic, and now he’s locked down a spot in the NHL. DeSmith holds the Penguins’ franchise record for most saves in a playoff game, 59, earned in a series-clinching OT win against Providence during those 2016 playoffs.