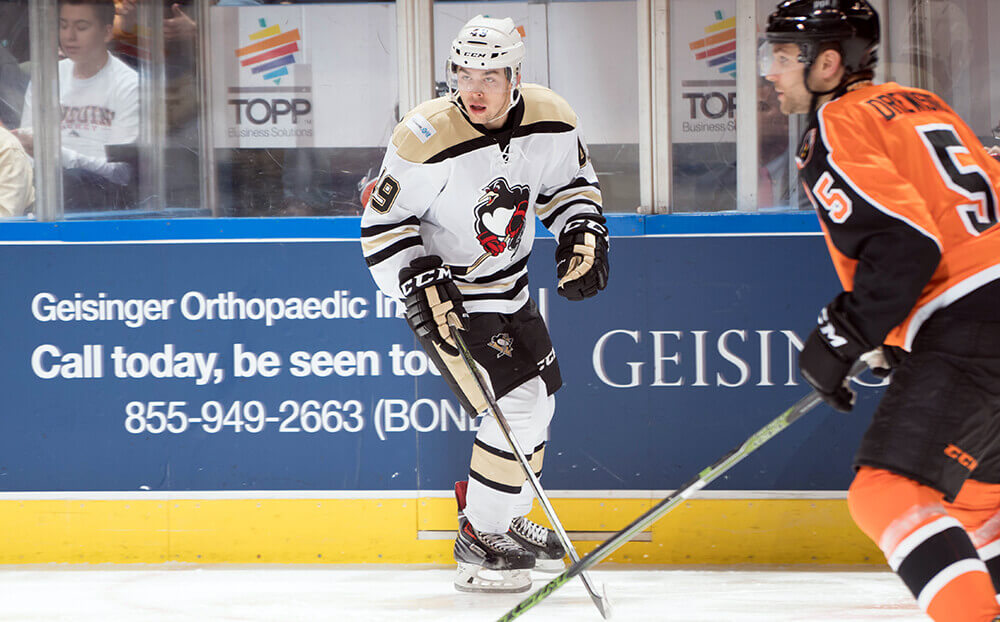 The moves the Pittsburgh Penguins made on the first day of National Hockey League free agency could have an impact in northeast PA.  Here’s a quick look at the signings and where they could fit in.

The Penguins kicked off the day by announcing the re-signing of free agent forward Evan Rodrigues to a one-year contract.  The 28-year old posted 14 points (7+7) in 35 games with Pittsburgh last season, his first full campaign with the club.

Now entering his seventh pro season, the versatile skater hasn’t appeared in an AHL contest since playing in eight contests with the Rochester Americans, and has locked in a spot on the NHL roster.

A familiar face returns to the organization after the Penguins signed Dominik Simon to a one-year, two-way contract.

The 26-year old forward from the Czech Republic spent the first five years of his career in the Pens organization, before suiting up for the Calgary Flames (NHL) and Stockton Heat (AHL) last season.

Simon, who ranks 23rd on Wilkes-Barre/Scranton’s all time scoring list with 111 points in 159 games, adds depth at center for the organization, and could be an impact player at the AHL level.

Pittsburgh also welcomed two veterans into the fold, while signing a recent NCAA champion to his first contract.

After six seasons suiting up in Raleigh, forward Brock McGinn is headed to the steel city on a four-year deal.

The hard-working, blue collar skater has recorded 106 points (51+55) in 345 games with the Carolina Hurricanes.

The Pens bolstered their blueline depth with the signing of Taylor Fedun.  The 33-year old has appeared in 127 NHL games with five different clubs over the past eight seasons.

Fedun has spent the majority of his career playing in the AHL, and has posted 181 points (41+140) in 356 games with Oklahoma, Worcester, Utica, Rochester and Texas.

And in net, the Pens signed University of Massachusetts goaltender Filip Lindberg to a two-year, entry level contract.

The native of Espoo, Finland posted a 10-1-4 record, 1.24 goals against average and .949 save percentage last season.

He also recorded a perfect 3-0 mark with a 0.33 GAA and .986 save percentage in postseason play as the Minutemen captured the 2021 NCAA Champonship.

Originally drafted by Minnesota in the 2019 NHL Draft, Lindberg will compete with Alex D’Orio and Tommy Napier for playing time in Wilkes-Barre.

Of course, free agency means some players will be moving on to new teams.  And four one-time Penguins found new homes on the first day of free agency.

The biggest name leaving the organization is Cody Ceci, who inked a four-year deal with the Edmonton Oilers after recording 17 points (4+13) in his lone season with Pittsburgh.

A few other players with Wilkes-Barre/Scranton tied are also on the move.

The Minnesota Wild swooped in to sign Frederick Gaudreau to a two-year contract after the spark plug posted 10 points (2+8) in 19 regular season games with Pittsburgh last season.  Gaudreau also notched four points (1+3) in six games with the AHL club.

Joining Gaudreau in the Wild organization is defenseman Jon Lizzotte, who earned a one-year, two-way deal after two-plus seasons in NEPA.