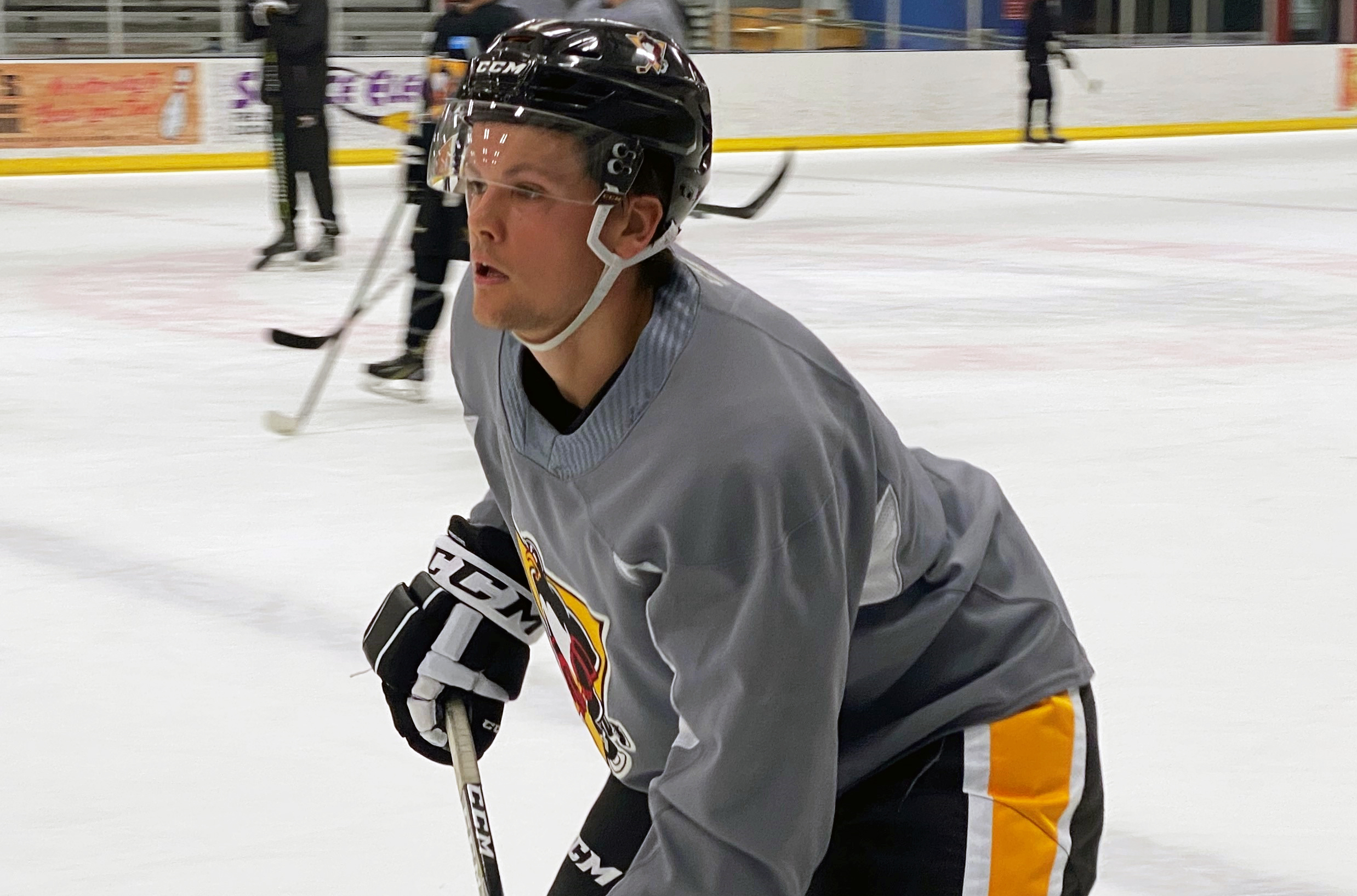 WILKES-BARRE, Pa. – Charlie Spetz was about as far away from a hockey rink as you can get when he received an unexpected phone call. Spetz, a recent graduate of Wilkes University, was vacationing in St. Maarten when Wilkes-Barre/Scranton Penguins head equipment manager Jared Mycyk got a hold of him.

Initially unaware as to why Mycyk would interrupt his holiday, Spetz quickly caught on.

“He just asked for my preferences on equipment and whatnot, and I kind of figured out there what was going on. A little bit later, Jason (Jarecki) contacted me with a tryout agreement.”

The 25-year-old defenseman now finds himself at Wilkes-Barre/Scranton Penguins training camp, vying to make an impression at his first pro training camp. Not only that, but Spetz is the first player in the short history of Wilkes hockey history to participate in a pro camp at any level.

Spetz’s presence at Penguins camp serves to demonstrate the program’s meteoric rise. The Colonels have posted a winning record in each of their seasons since becoming an NCAA Division III varsity hockey program in 2018. In just their second season, 2019-20, Wilkes advanced to the UCHC Tournament championship game.

Now the team can boast it’s first pro prospect in Spetz, as well.

“I mean they skyrocketed that first year,” Spetz said of his alma mater. “They had a great first year under Brett Riley, and then it just keeps getting better and better. … It’s pretty awesome to be that first guy who steps out and try to make something happen at higher levels, to try to play pro.”

A self-described “Jersey guy”, Spetz grew up playing youth hockey roughly a two-hour drive east of Wilkes-Barre. He bounced around youth hockey programs in his home state before the North American Hockey League relocated him to Alaska, then to Minnesota. After a one-year stop in New Hampshire, the six-foot-one blueliner found his way to Wilkes, where he had the opportunity to learn from Colonels new head coach, Tyler Hynes.

“Coach Hynes, he was great to me,” Spetz said. “He took me in, and he gave me the confidence and gave me the leash, the opportunity to play my style and everything kind of took off from there. I had a good last two years, and it’s paying off now.”

Spetz describes his style as a “steady” one. There isn’t a lot of flash to his game – perhaps evidenced by his 14 points in 65 NCAA games – but his deft hands and shifty skating allowed him to end plays and navigate the puck up ice with reputable efficiency during his time at Wilkes.

That smoothness was on display this past week at the Toyota SportsPlex, as Spetz was one of many players who got into town early ahead of Penguins camp. Those early arrivers had the opportunity to organize some informal tune-up scrimmages, an opportunity that all of them seized.

“There was about 20 guys on the ice,” he said. “It was fast and it definitely has been competitive. It’s been a good way to get my feet wet with pro hockey. It’s perfect leading into camp and it’s a good gauge for where I’m at and where I want to be.”

And where does Spetz want to be, exactly?

“I wanna be on the team, of course,” Spetz said with a smile, similar to the kind of grin you could imagine someone sporting while sun-bathing in St. Maarten.