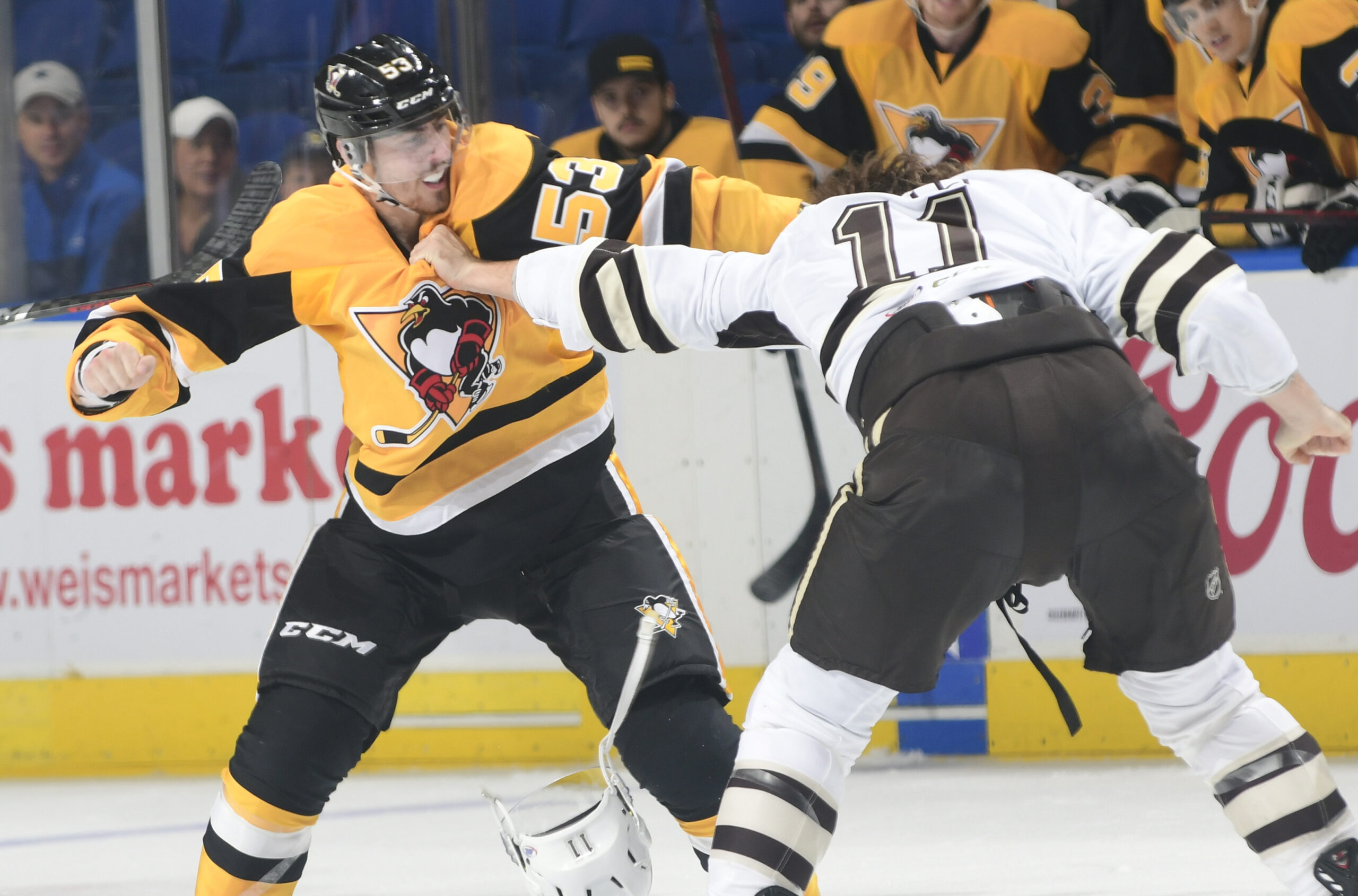 WILKES-BARRE, Pa. – To recap the Wilkes-Barre/Scranton Penguins ended up on the losing end of a thrilling, 5-4 preseason game against the Hershey Bears on Friday night at Mohegan Sun Arena at Casey Plaza.

Wilkes-Barre/Scranton received stand-out performances from Jan Drozg (2G) and Sam Houde (3A) for the second preseason game in a row. Not only did their skills delight the Penguins fans in attendance, but four different fights brought the crowd to its feet as well.

The Penguins raced out to an early lead on a perfectly placed snipe by Drozg 3:26 into the game. Hershey tied things up, 1-1, when Eddie Wittchow delivered a slap shot to the top corner midway through the opening frame.

Matt Alfaro put the Penguins back ahead with 2:51 left in the first period. Cam Lee’s drive from the left-side wall pinballed around before it ended up on Alfaro’s stick, in perfect position to push it across the goal line.

Wittchow earned his second goal of the night 75 seconds into the middle frame. Then Joe Snively buried a power-play goal at 11:02 of the second period, giving Hershey its first lead of the game, 3-2.

Hershey’s lead persisted until the third period, where both teams really turned up the heat. Drozg pulled off a jaw-dropping, between-the-legs goal to tie the game at 3:34 of the third period, swiftly followed by a Justin Almeida strike that gave Wilkes-Barre/Scranton a 4-3 lead.

Another man-advantage marker from the Bears – this one by Brett Leason – evened the scales again with more than 10 minutes still left in regulation.

Overtime was not in cards though, as Ryan Dmowski redirected a point shot for the game-winner with 1:03 remaining.

The game ended with 82 total penalty minutes between the two clubs. Fighting majors were racked up by the Bears’ Macoy Erkamps, Kale Kessy and Mason Morelli (x2), as well as the Penguins’ Jake Flegel, Félix Paré, Sean Josling and Félix Robert.

Filip Lindberg started the game in net for Wilkes-Barre/Scranton and recorded 16 saves on 19 shots through two periods. The Penguins then made a planned switch for the third period to Alex D’Orio, who turned aside 13 of 15 shots.

The Penguins have one preseason game remaining, tomorrow, Saturday, Oct. 9, against their other Keystone State rival, the Lehigh Valley Phantoms. Puck drop between the Penguins and Phantoms is scheduled for 7:05 p.m. at PPL Center.

RECAP: Wilkes-Barre/Scranton will open its 2021-22 regular-season schedule at home against the Lehigh Valley on Saturday, Oct. 16. Puck drop for the season opener is scheduled for 6:05 p.m. at Mohegan Sun Arena at Casey Plaza. The Penguins’ full schedule can be found at wbspenguins.com.