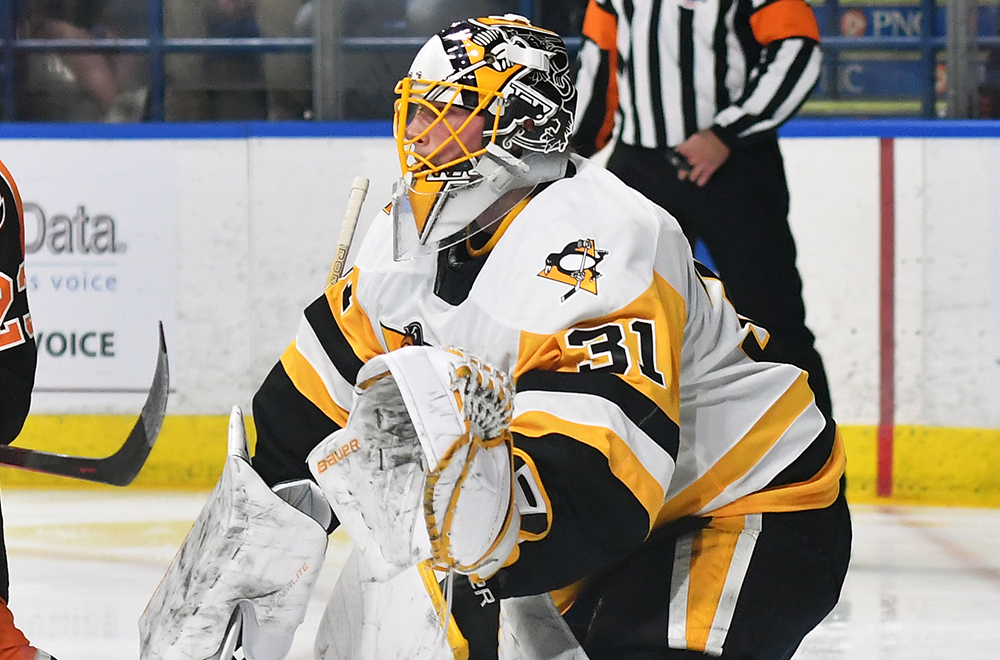 WILKES-BARRE, Pa. – The Wilkes-Barre/Scranton Penguins kicked off their 2021-22 season with a pulse-pumping, 2-1 victory over the Lehigh Valley Phantoms on opening night at Mohegan Sun Arena at Casey Plaza.

Wilkes-Barre/Scranton is off to a 1-0-0-0 start to the season thanks in large part to rookie goaltender Filip Lindberg. Making his pro debut after capturing the NCAA Men’s Hockey National Championship with the University of Massachusetts, Lindberg turned aside 30 of the 31 shots he faced to earn the win in front of 5,785 riled-up Penguins fans.

History was made right from the drop of the first puck, as referee Katie Guay became the first woman to serve as an on-ice official for an American Hockey League game.

The Penguins notched their first goal of the season midway through the first period. Rookies Sam Poulin and Valtteri Puustinen combined for a quick passing play that culminated in Puustinen’s first AHL goal.

Lindberg and the Penguins held onto their 1-0 lead for close to 30 minutes of play, all while being forced to navigate several penalty kills. Wilkes-Barre/Scranton was a perfect four-for-four on the P.K. until Tyson Foerster pulled the Phantoms even on their fifth man-advantage of the contest. Foerster’s tying goal arrived with 2:29 left in second period.

Wilkes-Barre/Scranton answered quickly at the start of the third, as Niclas Almari ripped a wrist shot past Felix Sandström just 69 seconds into the frame.

Lindberg handled his job in the crease the rest of the way out, securing the opening-night triumph for the Penguins.

Finland made a clean sweep of the three stars of the game. Puustinen was named the game’s third star, game-winning goal-scorer Almari was given the second star, while Lindberg’s shining performance earned him first-star honors.

Wilkes-Barre/Scranton is right back at it tomorrow, Sunday, Oct. 17. The Penguins will host the Charlotte Checkers in a Sunday matinée, Kids Free Sunday at Mohegan Sun Arena at Casey Plaza. Children ages 14 and under can attended the game free of charge with the purchase of an adult ticket.

Puck drop between the Penguins and Checkers is scheduled for 3:05 p.m.