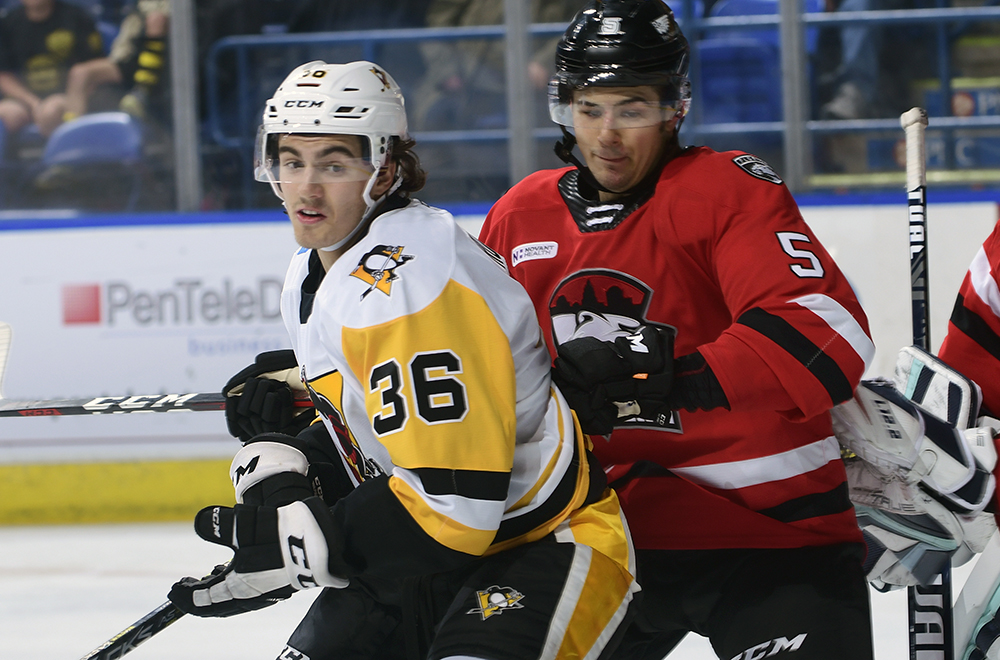 RECAP WILKES-BARRE, Pa. – The Wilkes-Barre/Scranton Penguins fell to the Charlotte Checkers, 4-1, despite putting forth a strong effort on Sunday afternoon at Mohegan Sun Arena at Casey Plaza.

Playing on less than 24-hours rest following their season-opening win, Wilkes-Barre/Scranton (1-1-0-0) had a tough time solving Charlotte goaltender Joey Daccord throughout the contest. Any time the Penguins’ hard work created a scoring chance, Daccord denied their aspirations of a comeback.

Checkers defenseman Lucas Carlsson netted the first goal of the contest just 1:17 into the second period. Shortly thereafter, the Penguins went to the penalty kill. Alex True capitalized on the man-advantage and lengthened Charlotte’s lead to 2-0.

In an attempt to get on the board before the end of the middle frame, Jonathan Gruden cut through the neutral zone on a clear breakaway. Daccord got a piece of the shot, maintaining the Checkers’ two-goal lead over the Penguins.

The Penguins turned up the heat in the third period, hoping to get on the board. Despite their efforts, the Checkers found an opening halfway through the period. Max McCormick found the back of the net and put Charlotte ahead, 3-0.

With only two minutes left in the matchup, the Penguins’ snapped Daccord’s shutout bid. Valtteri Puustinen unloaded a heavy shot during a late-game power play, which caromed off the end boards back to Félix Robert. Robert stuffed in the loose puck for Wilkes-Barre/Scranton’s only goal in the contest.

Zac Dalpe sealed the win for Charlotte with an empty-netter with 12.2 seconds remaining.

Daccord finished the game having turned aside 26 shots, while Penguins goaltender Tommy Nappier recorded 28 saves in the loss.

Wilkes-Barre/Scranton’s next game is Friday, Oct. 22 against the Hartford Wolf Pack. Puck drop between the Penguins and the Wolf Pack is scheduled for 7:05 p.m. at Mohegan Sun Arena at Casey Plaza.