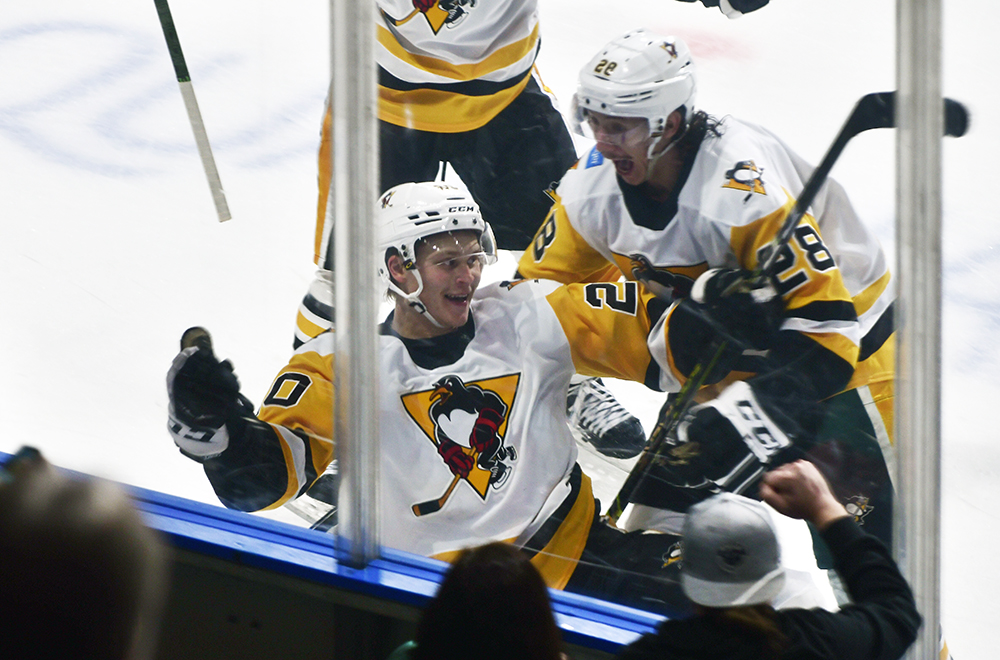 WILKES-BARRE, Pa. – Kasper Björkqvist scored at 2:41 of overtime, and the Wilkes-Barre/Scranton Penguins emerged victorious at the end of a thrilling contest on Friday night, defeating the Hartford Wolf Pack, 2-1, at Mohegan Sun Arena at Casey Plaza.

Wilkes-Barre/Scranton (2-1-0-0) played to a 1-1 tie in the first period, and the even score was maintained throughout the rest of regulation thanks to outstanding goaltending on both ends of the ice.

The first period was fast-paced and full of scoring attempts from both teams, but it was the Penguins who took the lead early in the contest. Filip Hållander found a rebound and netted his first AHL goal to get the Penguins on the board seven minutes into the game.

The Penguins spent most of the first period in the offensive zone, but with only 22.2 seconds left in the period, Hartford evened the score. Anthony Greco swatted in a loose puck and the teams headed into the first intermission tied at 1-1.

After an uneventful second period, the Penguins and Wolf Pack came out roaring in the third. The teams traded back-and-forth, odd-man scoring opportunities, but none found twine. The best opportunity of the frame was Nathan Légaré’s breakaway towards the end of regulation. With no one around, Légaré ripped a shot that beat Wolf Pack goaltender Keith Kinkaid, but ricocheted off the post.

Both Kinkaid and Filip Lindberg exchanged amazing saves until the game reached the end of 60 minutes.

The stalemate came to an end in overtime on a brilliant set-up and execution by the three-man unit of Cam Lee, Jordy Bellerive and Björkqvist.

Lindberg finished the game with a total of 30 saves while Kinkaid finished with 25.

The Penguins went 0-for-4 on the power play, but were impenetrable on four penalty kills, as well.

Wilkes-Barre/Scranton is on the road for the first time this season for its next game on Sunday, Oct. 24. The Penguins will take on the Lehigh Valley Phantoms in a Sunday matinée at PPL Center. Puck drop between the Penguins and the Phantoms is scheduled for 3:05 p.m.

The Penguins return for their next home game on Wednesday, Oct. 27 also against the Lehigh Valley Phantoms. Game time for the second installment of Penguins vs. Phantoms is 7:05 p.m. at Mohegan Sun Arena at Casey Plaza.