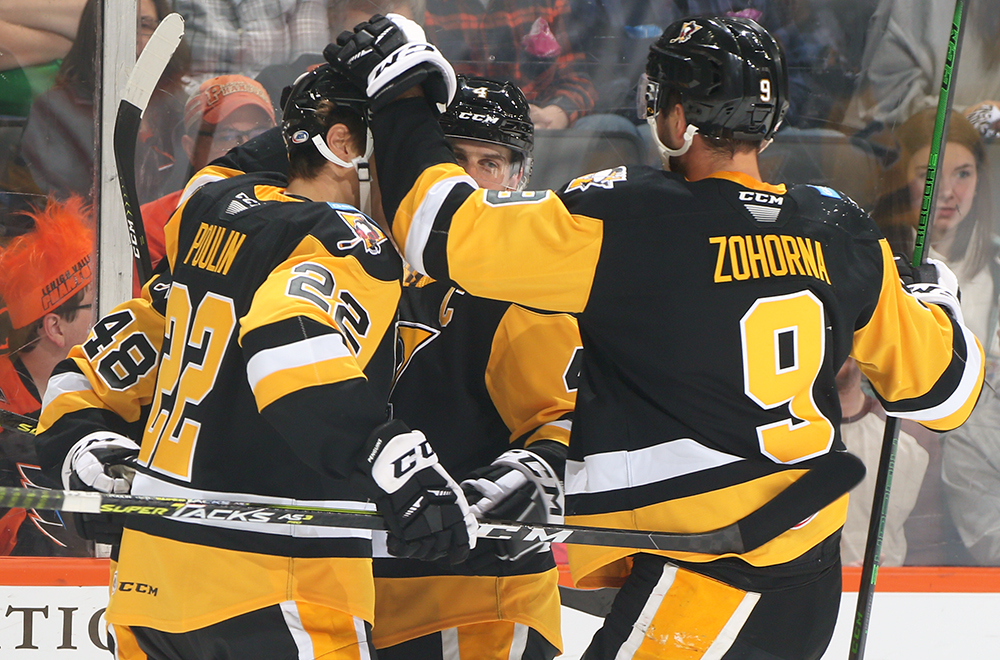 WILKES-BARRE, Pa. – The Wilkes-Barre/Scranton Penguins posted a 2-1 win in overtime for the second game in a row, dispatching of the Lehigh Valley Phantoms at PPL Center on Sunday afternoon.

Rookie forward Valtteri Puustinen led the way for Wilkes-Barre/Scranton (3-1-0-0), scoring both of his team’s goals in the contest. Louis Domingue backstopped the Penguins with 28 saves to earn the win in his first game with the club.

Puustinen put the Penguins on the board first, taking advantage of a Phantoms defensive zone turnover at 9:49 of the opening frame.

Despite going to the penalty box four different times in the second period, the Penguins still managed to out-shoot Lehigh Valley, 13-8, during the middle stanza. Wilkes-Barre/Scranton also maintained its 1-0 advantage thanks to an agile save by Louis Domingue in the final seconds of the period.

Pace picked up in the third period, but the Penguins were unable to extend their lead. Phantoms goalie Sam Ersson made several huge saves, preventing Wilkes-Barre/Scranton from building a multi-goal cushion.

With the goalie pulled and extra attacker on the ice, Max Willman tied the game with 46 seconds left in regulation.

Overtime lasted less than a minute, as a snipe by Puustinen sealed the win for Wilkes-Barre/Scranton.

The Penguins failed to convert on their three power plays but went a perfect six-for-six on the penalty kill. Wilkes-Barre/Scranton has now successfully killed off 10 opponent power plays in a row.

Wilkes-Barre/Scranton’s next game will be a rematch against Lehigh Valley on Wednesday, Oct. 27. Game time is slated for 7:05 p.m. at Mohegan Sun Arena at Casey Plaza.