PENGUINS LED BY “BIG Z” IN 4-2 VICTORY OVER PHANTOMS 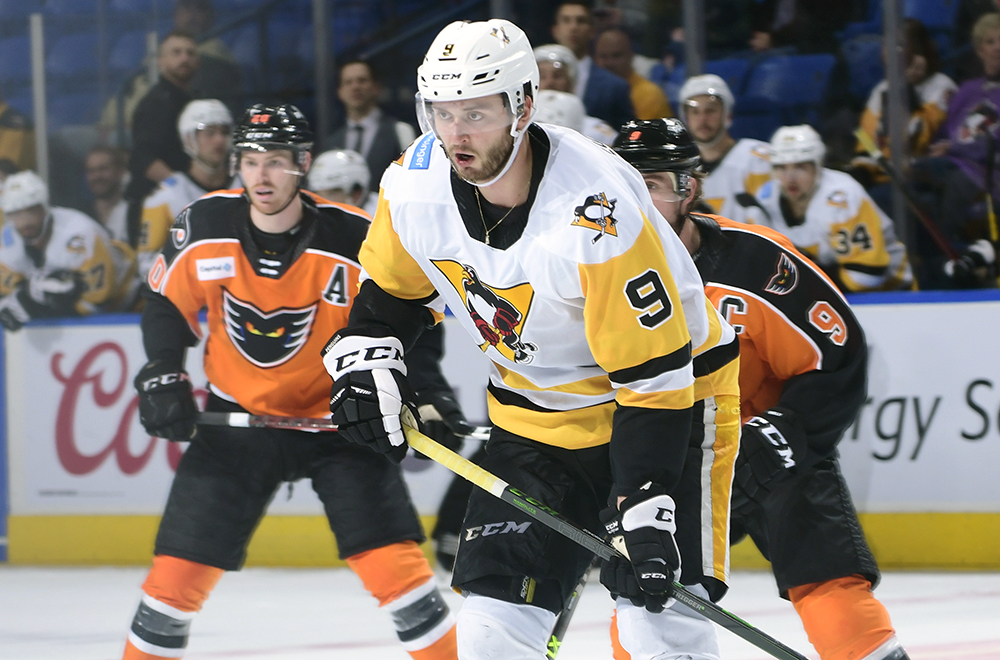 WILKES-BARRE, Pa. – Radim Zohorna led the way as the Wilkes-Barre/Scranton Penguins won their third game in a row by beating the Lehigh Valley Phantoms, 4-2, at Mohegan Sun Arena at Casey Plaza on Wednesday night.

‘Big Z’ led the offense for Wilkes-Barre/Scranton (4-1-0-0), lighting the lamp twice. The Penguins did not give up the lead after Zohorna earned it for them late in the first period.

The Penguins struck first when Jamie Devane found the back of the net at 6:04 of the opening frame. However, Lehigh Valley answered roughly two minutes later. Gerry Mayhew slipped the puck behind Wilkes-Barre/Scranton goaltender Filip Lindberg during the power play, tying the game at one goal apiece.

The Phantoms took the lead with an Adam Clendening goal at 13:27 of the first period.

Wilkes-Barre/Scranton evened the score, 2-2, on a power-play snipe by Michael Chaput with 1:15 left in the period. Then Zohorna’s first goal of the night put the Penguins up, 3-2, with only 2.4 seconds left before the first intermission.

After a sluggish start by both teams to kick off the second period, Zohorna gave the Penguins some breathing space. A beautiful, top-shelf goal during the man advantage gave Wilkes-Barre/Scranton its first two-goal lead of the season. Valtteri Puustinen recorded the primary assist on both of Zohorna’s tallies.

Up 4-2, the Penguins clamped down defensively and marched their way to victory.

Lindberg finished the game with a total of 20 saves, while Phantoms goaltender Felix Sandström recorded 21 stops.

Wilkes-Barre/Scranton is back on the road for its next game on Friday, Oct. 29 against the Hartford Wolf Pack. Puck drop between the Penguins and the Wolf Pack is scheduled for 7:00 p.m. at XL Center. The Penguins’ next home is Friday, Nov. 5, when they host the Providence Bruins at Mohegan Sun Arena at Casey Plaza with game time scheduled for 7:05 p.m. For Wilkes-Barre/Scranton’s showdown with Providence, $2 select draft beers will be available from 6:00-7:30.