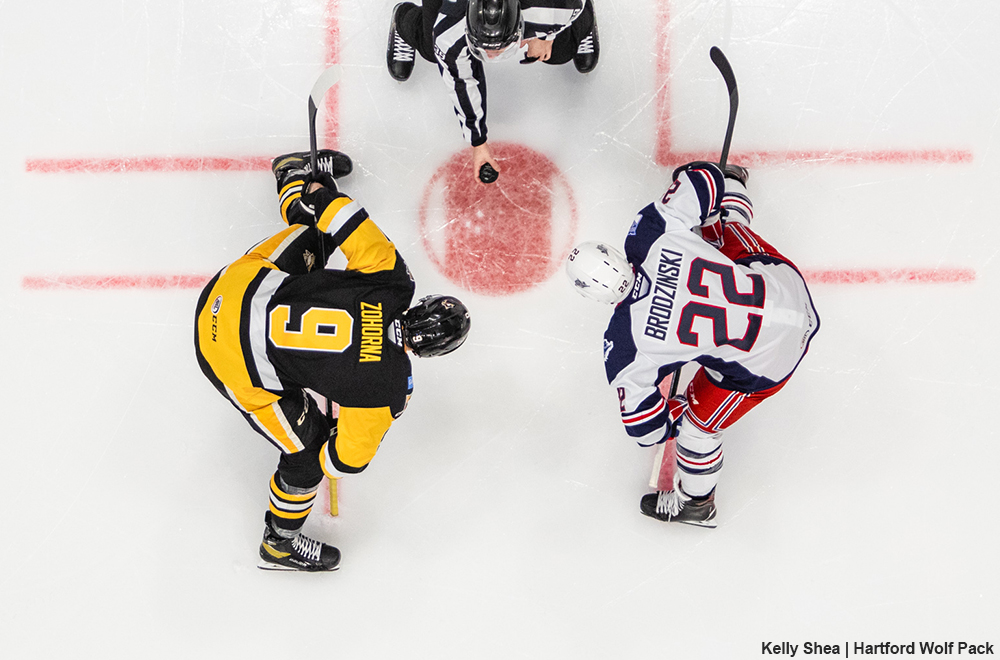 HARTFORD, Conn. – Louis Domingue turned in a 35-save gem for the Wilkes-Barre/Scranton Penguins, but the team suffered a 3-2, shootout loss to the Hartford Wolf Pack on Friday night at XL Center.

Domingue kept Wilkes-Barre/Scranton (4-1-0-1) in the game despite being peppered with quality scoring chances for most of the night. Sam Poulin’s first AHL goal late in regulation forced overtime and earned the Penguins a point in the standings.

The Penguins opened the scoring with a bang-bang play five minutes into the game. Nathan Légaré was initially turned away by Keith Kinkaid and then a rebound attempt by Jordy Bellerive was denied, but the Wolf Pack goalie unwittingly swept the lingering puck right back to Légaré. The rookie quickly slapped the puck towards the net from a sharp angle, and it ricocheted off Sam Houde and into the net.

Hartford waited until 16:44 of the first period to respond, and then had to wait even longer for its tying goal to be confirmed by video review. Initially waved off by the referee, Anthony Greco was eventually credited with the equalizer.

Wilkes-Barre/Scranton was out-shot, 13-6, in the second period, but Domingue conjured numerous jaw-dropping saves to keep the game tied at 1-1.

Domingue continued his stellar play in the third period, but eventually, Hartford broke through. A tip-in by Morgan Barron during a third-period power play gave the Wolf Pack their first lead of the game with 6:16 left in regulation.

The Penguins would not be denied, storming back to force OT. After Bellerive was robbed by Kinkaid, the Penguins regrouped and saw Poulin light the lamp with 40.8 seconds remaining.

Overtime featured more heroics from both goaltenders, and the five-minute period yielded no goals. The first three rounds of the shootout were also fruitless, but Tim Gettinger netted the winner for Hartford in round four.

Kinkaid racked up 26 saves in regulation and OT, plus denying all four Penguins bids in the shootout.

Wilkes-Barre/Scranton is back on the ice tomorrow, Saturday, Oct. 30, closing out the month against the Springfield Thunderbirds. Puck drop between the Penguins and T-Birds is scheduled for 7:05 p.m. at MassMutual Center. The Penguins’ next home game is Friday, Nov. 5, when they host the Providence Bruins at Mohegan Sun Arena at Casey Plaza with game time scheduled for 7:05 p.m. For Wilkes-Barre/Scranton’s showdown with Providence, $2 select draft beers will be available from 6:00-7:30.