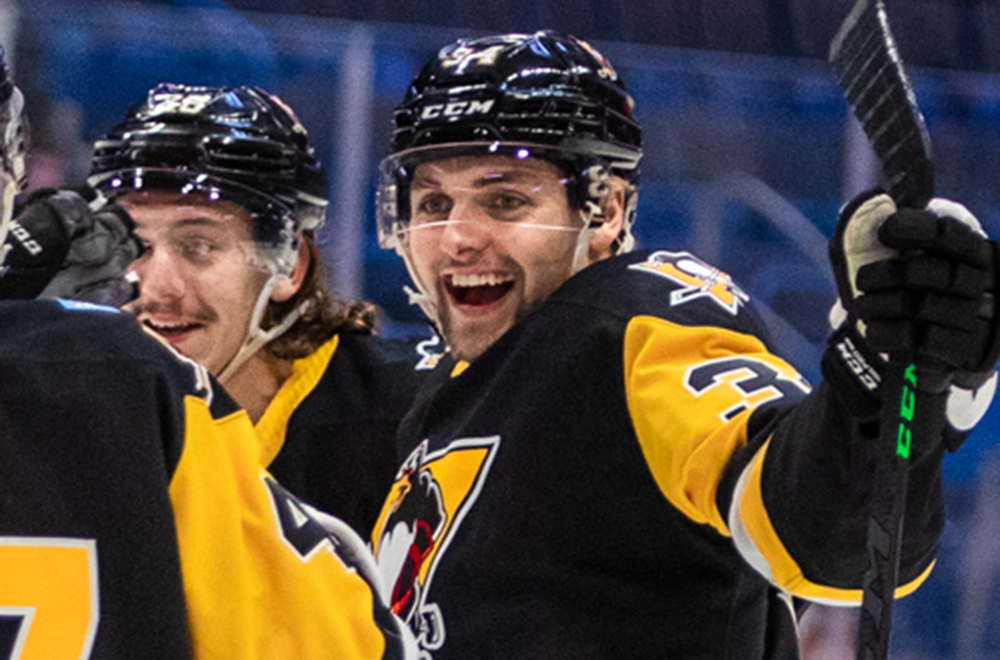 SPRINGFIELD, Mass. – Nathan Légaré saved his first AHL goal for the perfect time, scoring the overtime game-winner in the Wilkes-Barre/Scranton Penguins’ 4-3 triumph over the Springfield Thunderbirds on Saturday night at MassMutual Center.

Wilkes-Barre/Scranton (5-1-0-1) improved its point streak to five games by earning its third overtime victory of the season. Félix Robert scored twice in regulation and goaltender Filip Lindberg turned away a career-best 34 shots as the Penguins took down the top team in the Atlantic Division.

After competing in a feisty, fast-paced and back-and-forth contest for 60 minutes, the Penguins were quickly put on the power play in overtime. Légaré uncorked a wicked one-timer to seal the win for Wilkes-Barre/Scranton at 2:49 of the extra session.

Springfield ran out of the gate hot and seized the game’s first lead with a shorthanded goal. Hugh McGing and Matthew Peca raced up ice while playing a man down with the latter lighting the lamp at 5:56 of the first period.

Less than two minutes later, Wilkes-Barre/Scranton responded with Robert’s first goal of the night. Robert gave the Penguins a 2-1 lead 80 seconds into the middle frame, picking up a rebound at the side of the Thunderbirds’ net and stuffing it past Springfield goalie Joel Hofer.

Valtteri Puustinen made it 3-1 with his team-leading fourth goal of the season. Set up on a saucer pass from Sam Poulin, Puustinen roofed a perfectly placed shot over the glove of Hofer at 6:17 of the second period.

The Thunderbirds found a spark early in the third period in the form of Keean Washkurak’s first AHL goal. After Washkurak’s tally, Springfield proceeded to hound the Penguins for the rest of regulation. Eventually, their hard work resulted in an equalizer, albeit under the wildest of circumstances.

With the goalie pulled and extra attacker on the ice, Calle Rosén released a shot from the blueline. His bid redirected off of Poulin’s shin, then struck Cam Lee in the face and ricocheted into the net. Rosén’s wacky goal tied the game, 3-3, with 40.6 seconds left in regulation.

The Penguins were a perfect four-for-four on the penalty kill throughout the night and went one-for-five on the power-play including Légaré’s game-winner.

Wilkes-Barre/Scranton returns to its home state for its next game, a jaunt down the PA Turnpike for a meeting with the Lehigh Valley Phantoms on Wednesday, Nov. 3. Puck drop between the Penguins and Phantoms is scheduled for 7:05 p.m. at PPL Center. The Penguins’ next home game is Friday, Nov. 5, when they host the Providence Bruins at Mohegan Sun Arena at Casey Plaza with game time scheduled for 7:05 p.m. For Wilkes-Barre/Scranton’s showdown with Providence, $2 select draft beers will be available from 6:00-7:30.