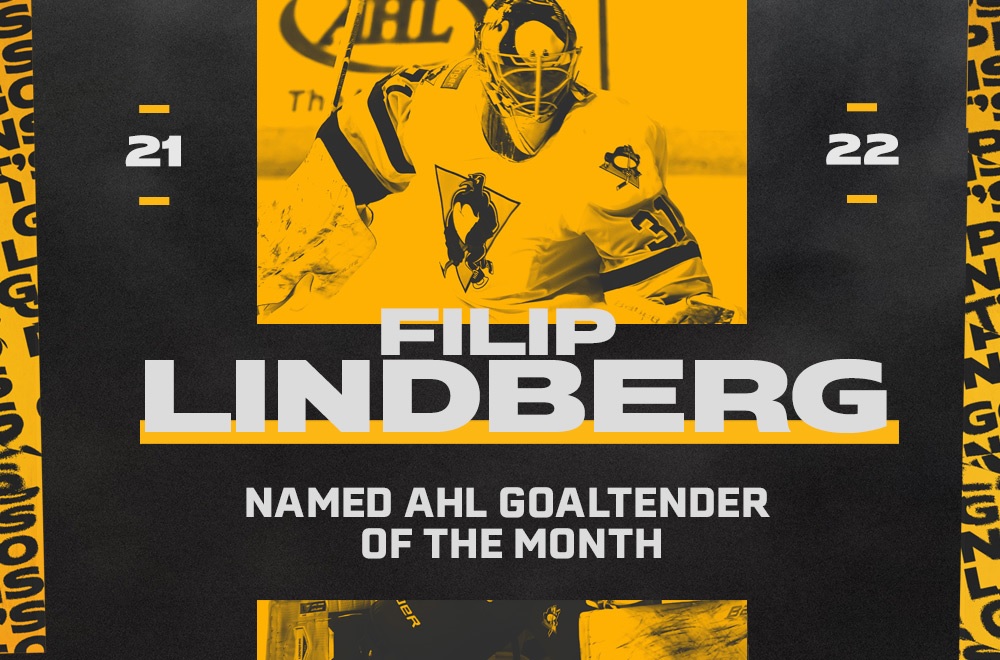 Lindberg posted a 1.71 goals against average and .942 save percentage through his first four AHL starts. The rookie is tied for the league lead with four wins and is one of two goalies to remain unbeaten through four games this season.

The 22-year-old from Espoo, Finland kickstarted his pro career by making 30 saves on 31 shots faced in Wilkes-Barre/Scranton’s opening night, a 2-1 victory over the Lehigh Valley Phantoms. Lindberg followed that outing with another 30-save outing on Oct. 22 vs. Hartford.

Lindberg’s most recent triumph came this past Saturday, Oct. 30, as he recorded a career-best 34 saves while he and the Penguins defeated the Atlantic Division-leading Springfield Thunderbirds in overtime, 4-3.

The last Penguins netminder to earn AHL Goaltender of the Month honors was Casey DeSmith in November of the 2019-20 season.

Lindberg is also the second goalie in Penguins history to start his pro career on a four-game winning streak. The other was Tristan Jarry, who rattled off six consecutive victories to start the 2015-16 campaign.

Prior to joining Wilkes-Barre/Scranton, Lindberg put forth three incredible seasons at the University of Massachusetts. In 50 games with the Minutemen, he earned a 1.58 goals against average and .937 save percentage. Lindberg backstopped UMass to its first NCAA Men’s Ice Hockey National Championship in 2021, recording a shutout in the title-clinching game. He finished his collegiate career with a 29-10-6 record and more shutouts (11) than he had losses.

Wilkes-Barre/Scranton’s next game is against the Lehigh Valley Phantoms on Wednesday, Nov. 3 at PPL Center. Puck drop between the Penguins and Phantoms is scheduled for 7:05 p.m.

The Penguins’ next home game is Friday, Nov. 5, when they host the Providence Bruins at Mohegan Sun Arena at Casey Plaza with game time scheduled for 7:05 p.m. For Wilkes-Barre/Scranton’s showdown with Providence, $2 select draft beers will be available from 6:00-7:30, courtesy of the PA Prostate Cancer Coalition.