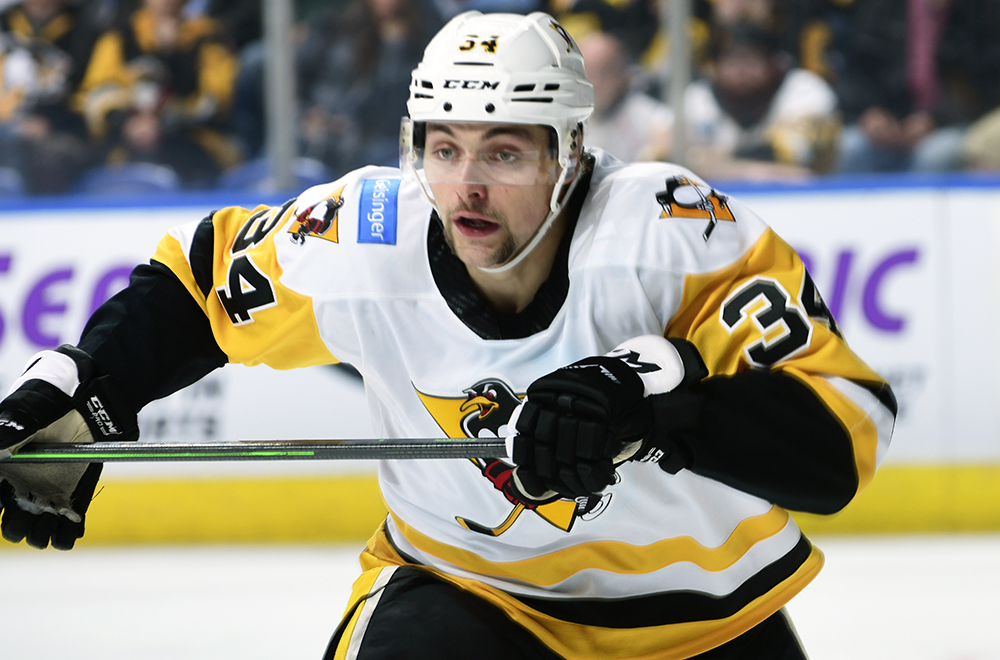 WILKES-BARRE, Pa. – The Wilkes-Barre/Scranton Penguins fell by a score of 6-2 to the Providence Bruins at Mohegan Sun Arena at Casey Plaza on Friday night.

Wilkes-Barre/Scranton (5-3-0-1) fell into a 4-0 hole and couldn’t recover, despite their inspired play in the second half of the game.

Providence scored only 67 seconds into the contest with a goal from Oskar Steen. The Bruins doubled that lead by tallying on the back half of a double-minor power play at 8:18.

The Bruins cashed in on another man advantage two minutes into the second period when Zach Senyshyn tipped in a booming slapshot by John Moore. Not long after, Moore delivered another power-play slapper that was redirected in, this time by Chris Wagner.

Providence’s fourth goal resulted in the end of the night for Filip Lindberg, who had already faced 20 shots through 25 minutes of play. He was replaced by Louis Domingue.

The Penguins started to turn things around in the middle frame, and their hard work resulted in a goal with less than five minutes left in the period. Nathan Légaré buried a bouncing puck and put Wilkes-Barre/Scranton on the board.

Wilkes-Barre/Scranton started the final 20 minutes of regulation with continued strong play. Kyle Olson’s one-timer from the slot soared over the shoulder of Providence goaltender Jon Gillies at 2:38, which cut the deficit to 4-2.

Eduards Tralmarks put Providence back ahead by three midway through the third, and the Bruins sealed the win with an empty-net goal from Steen with less than a minute and a half to go.

Lindberg made 16 saves before being replaced by Domingue, who denied 15 of 16 shots. Gillies earned the win for Providence having made 29 stops.

Wilkes-Barre/Scranton’s next game is on the road tomorrow, Saturday, Nov. 6, against the Hartford Wolf Pack. Puck drop between the Penguins and Wolf Pack is scheduled for 7:00 p.m. at XL Center. The Penguins return to home ice to play the Rochester Americans on Wednesday, Nov. 10 at Mohegan Sun Arena at Casey Plaza. Game time for the Penguins’ tilt against the Amerks is 7:05 p.m.

Individual-game tickets and season-ticket packages for the 2021-22 season are on sale now. Full-Season, 22-game, 12-game, Flexbook and Premium Seating plans are available by reaching out to the Penguins directly at (570) 208-7367.