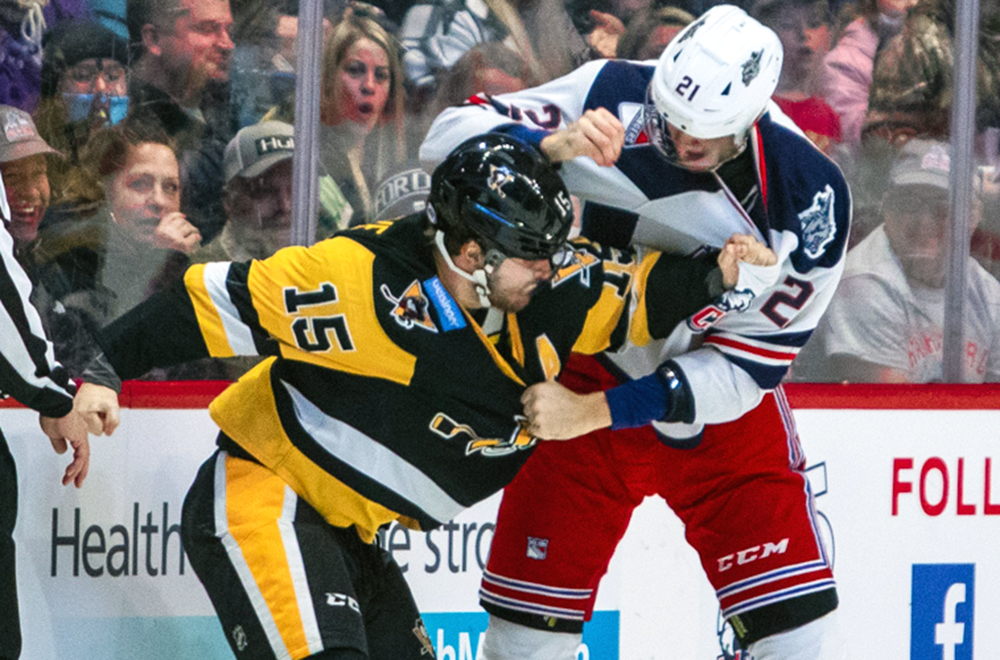 HARTFORD, Conn. – The Wilkes-Barre/Scranton Penguins had a furious comeback bid thwarted by the Hartford Wolf Pack in a 4-3 loss at XL Center on Saturday night.

Wilkes-Barre/Scranton (5-4-0-1) rattled off three consecutive goals in the third period, but fell short in its attempt to claw out of a four-goal hole.

The Penguins came out of the gate firing on all cylinders, testing Wolf Pack goalie Tyler Wall early and often in his first game of the season. Despite their ferocious start, Wilkes-Barre/Scranton found itself trailing by two by the end of the opening frame.

Tanner Fritz kicked off the scoring at 6:52 of the first period, followed one minute later by a strike from Anthony Bitetto.

Hartford extended its lead to 3-0 when Tim Gettinger polished off a shorthanded rush early in the second period.

In what proved to be a crucial moment in the game, Hartford pulled ahead by four goals thanks to a beneficial bounce two minutes into the third period. Lauri Pajuniemi flicked a wrist shot towards the Penguins net, that then deflected off of a defenseman and fooled Louis Domingue.

Undeterred, Wilkes-Barre/Scranton broke through less than a minute after Pajuniemi’s heartbreaking bounce. Félix Robert cranked a one-timer behind Wall to put the Penguins on the board, and 23 seconds later, Jordy Bellerive cut the deficit down to two.

With the goalie pulled and extra attacker on the ice, Sam Poulin made it 4-3 with 43 seconds left in regulation. However, the Penguins could not muster another goal in those 43 seconds.

Domingue recorded 29 saves in the loss for the Penguins, while Wall turned aside 27 shots for the Wolf Pack.

Wilkes-Barre/Scranton’s next game is back home on Wednesday, Nov. 10 against the Rochester Americans. Game time for the Penguins’ tilt against the Amerks is 7:05 p.m. at Mohegan Sun Arena at Casey Plaza.

Individual-game tickets and season-ticket packages for the 2021-22 season are on sale now. Full-Season, 22-game, 12-game, Flexbook and Premium Seating plans are available by reaching out to the Penguins directly at (570) 208-7367.