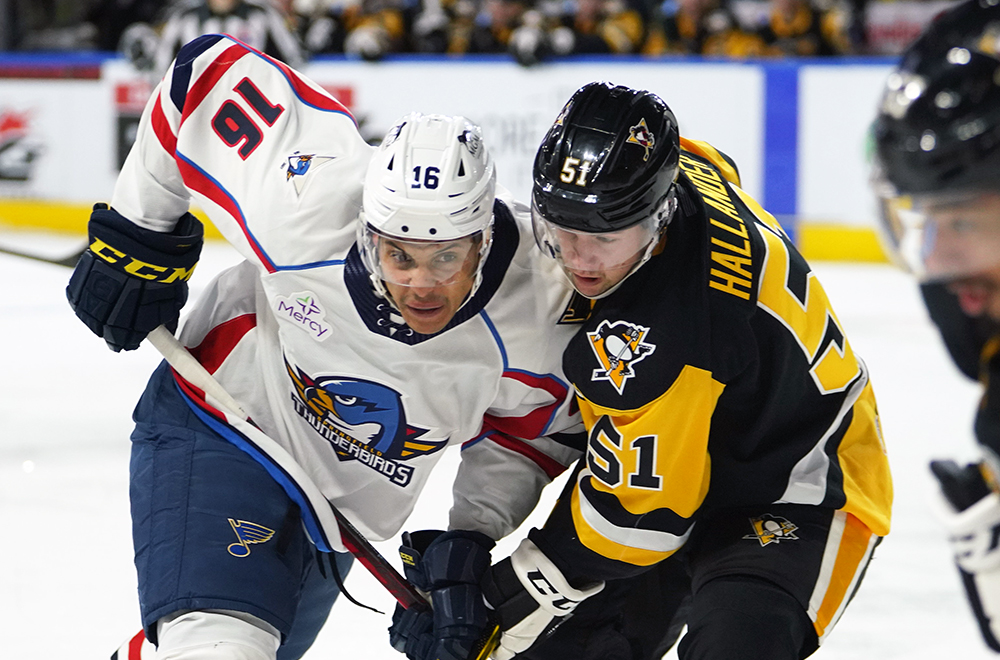 SPRINGFIELD, Mass. – At the end of a fast-paced, back-and-forth game, the Wilkes-Barre/Scranton Penguins lost in a shootout to the Springfield Thunderbirds, 5-4, on Friday night at MassMutual Center.

Wilkes-Barre/Scranton (6-6-0-2) raced out to a 3-0 lead in the first period thanks to a trio of assists from defenseman Juuso Riikola, but Springfield slowly chipped away at the Penguins’ lead. Eventually, the Thunderbirds took a third-period lead only for the Penguins to storm back and force overtime.

Radim Zohorna kicked off the scoring early, tallying 63 seconds into the game. That was swiftly followed by a pair of power-play goals from Drew O’Connor and Filip Hållander at 7:44 and 12:27, respectively. Riikola assisted on all three of the Penguins’ first-period goals.

Springfield got on the board with a tip-in goal by Alexey Toropchenko with 2:30 remaining in the opening frame.

Matthew Peca swatted in a loose puck at the Penguins net-front at 14:01 of the second period, cutting Wilkes-Barre/Scranton’s lead to 3-2.

Toropchenko struck again to tie the game five minutes into the third, and his tally was met 41 seconds later with a go-ahead goal courtesy of T-Birds teammate Tanner Kaspick.

The Penguins equalized, 4-4, when Cam Lee swooped into the high slot and buried his first goal of the season. Lee’s tying goal arrived at 8:13 of the third period.

The five-minute overtime period was just that: five minutes. There were no stoppages during the entire extra frame as the teams traded game-winning scoring chances. The clubs combined for eight shots in OT, but none created a decisive winner.

Springfield’s Hugh McGing scored the lone goal of the shootout, lighting the lamp in the second round.

Penguins goaltender Louis Domingue finished the game having made 35 saves in regulation and overtime, as well as denying two of three in the shootout. Thunderbirds netminder Joel Hofer turned aside 29 shots in 65 minutes of work and then was unbeaten in the shootout.

Wilkes-Barre/Scranton’s next game is tomorrow, Saturday, Nov. 20, against the Providence Bruins. Puck drop between the Penguins and Bruins scheduled for 7:05 p.m. at Dunkin’ Donuts Center. The Penguins return home on Nov. 27 to face-off against Providence for Hockey Fights Cancer night. Game time is scheduled for 6:05 p.m. at Mohegan Sun Arena at Casey Plaza.