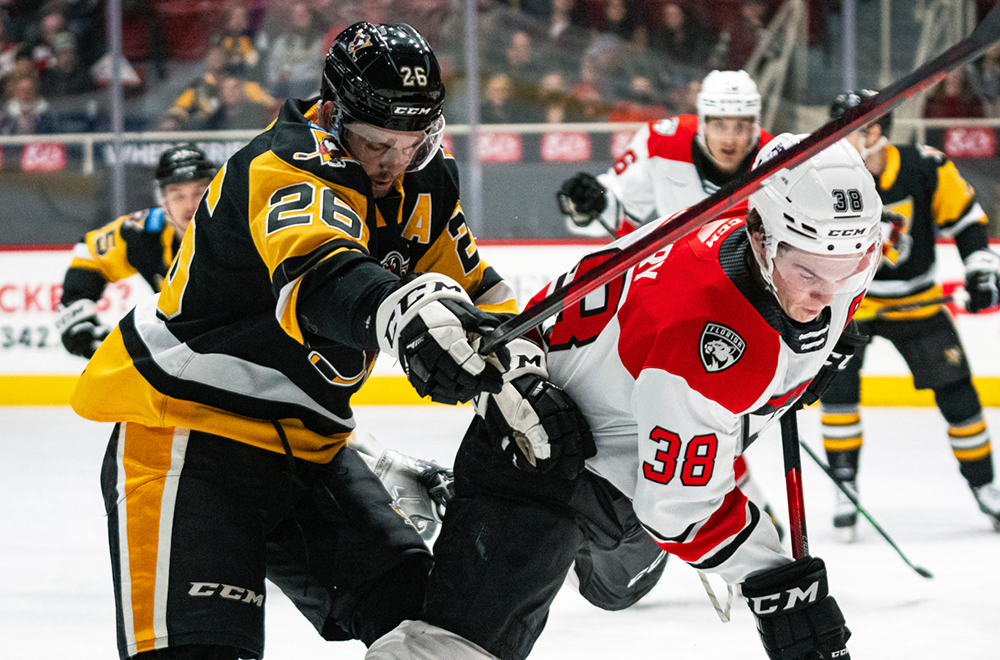 CHARLOTTE, N.C. – The Wilkes-Barre/Scranton Penguins scored late in regulation and then again late in overtime to defeat the Charlotte Checkers, 3-2, on Tuesday night at BoJangles’ Coliseum, with Filip Hållander scoring the final moments.

Wilkes-Barre/Scranton (8-6-0-2) weathered an early storm by its opponent and erased a pair of two-goal deficits before Filip Hållander scored with 19.2 seconds left in OT.

The Penguins were out-shooting the Checkers, 5-1, during a breakneck extra frame, but it took until their sixth shot to secure the win. Pierre-Olivier Joseph rushed up ice and delivered a drop pass to Hållander, who ripped a laser from the high slot past Checkers goalie Joey Daccord.

Charlotte opened the scoring at 12:25 of the first period. After blitzing the Penguins with pressure for most of the opening frame, Grigori Denisenko finally solved Louis Domingue to put the Checkers ahead.

The Penguins eventually got on the board with a power-play goal 4:40 into the middle frame. Michael Chaput broke loose for a breakaway and buried his one-on-one chance against Daccord.

The Checkers responded less than five minutes later, as a one-timer by Chase Priskie put Charlotte back on top, 2-1.

With time dwindling away in the third period, Chaput set up Wilkes-Barre/Scranton’s equalizer with five minutes left in regulation. Chaput fed a puck between the hashmarks to Kyle Olson, who slammed a one-timer to the back of the net.

Although he wasn’t tested much in overtime, Domingue made several sparkling saves to help his team get the game to the extra period. The Penguins’ netminder denied 33 shots in the win, while Daccord turned aside 34 shots in the loss.

Wilkes-Barre/Scranton and the Checkers will do battle at the same place, same time tomorrow, Wednesday, Nov. 24. Puck drop for the rematch between the Penguins and Checkers is scheduled for 7:00 p.m. at BoJangles’ Coliseum. The Penguins return home on Saturday, Nov. 27 to face-off against the Providence Bruins for Hockey Fights Cancer night. Game time is scheduled for 6:05 p.m. at Mohegan Sun Arena at Casey Plaza.