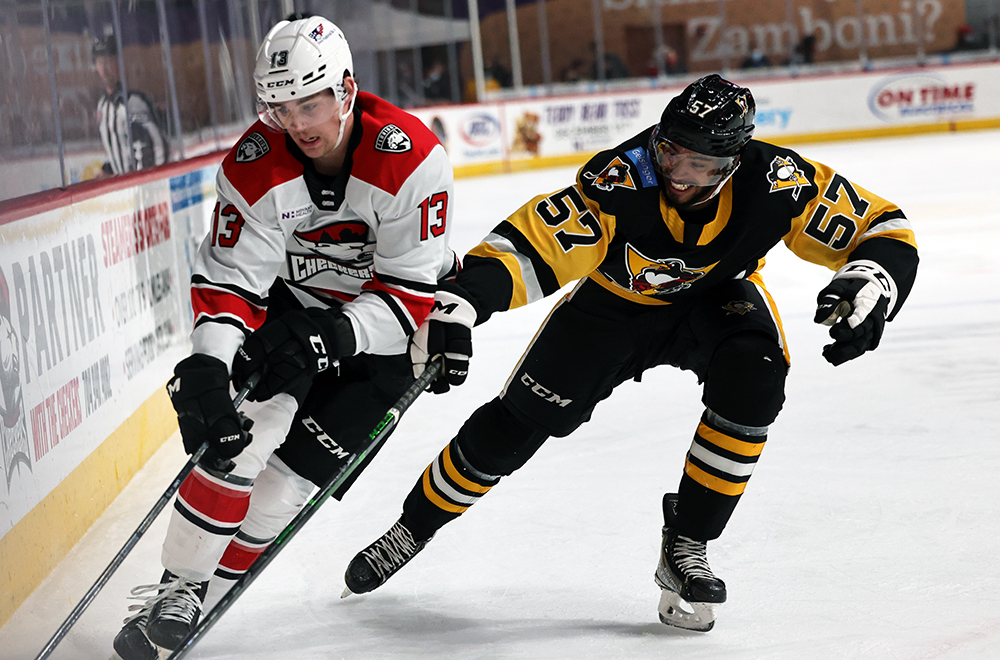 CHARLOTTE, N.C. – The Wilkes-Barre/Scranton Penguins came up short against the Charlotte Checkers, 4-3, on Wednesday night at BoJangles’ Coliseum.

Wilkes-Barre/Scranton (8-7-0-2) attempted another third-period rally, but unlike their win on Tuesday, the Penguins never materialized a tying goal.

A fast-paced first period came to an end with Charlotte ahead, 2-1. The Checkers notched the opening goal out of net-front scramble, but the Penguins responded less than a minute later with Pierre-Oliver Joseph’s first goal of the season. Former Pittsburgh Penguin Riley Sheahan put Charlotte back in the lead at 13:38 of the first frame.

Kasper Björkqvist pulled Wilkes-Barre/Scranton even at 3:38 of the second period by redirecting Juuso Riikola’s blast from the point.

Charlotte quickly raced out to a two-goal lead with a pair of strikes in the first three minutes of the third period. Penguins penalty killer Michael Chaput blocked a shot off his face, and while he stood stunned in the Wilkes-Barre/Scranton zone, Charlotte scrambled to string together a series of passes that led to a Zac Dalpe power-play goal. Less than two minutes later, Max McCormick made it 4-2, Checkers.

The Penguins seized control of the game after that, starting with a strike from Jordy Bellerive at 5:50 of the third. Bellerive took on the Checkers, one-on-four, bullied his opponents below the goal line until support arrived from the Penguins’ bench. Drew O’Connor snagged a turnover created by Bellerive’s hard work, then thrust the puck back to Bellerive for the tap-in on the backdoor.

Wilkes-Barre/Scranton out-shot Charlotte in the third period, 12-3. Despite all the pressure created by the Penguins, they couldn’t manage to force an equalizer past Christopher Gibson. Gibson made several stellar saves in the back half of the third period, including a robbery of Radim Zohorna with less than a minute to go.

Gibson ultimately finished with 22 saves, while Tommy Nappier turned aside 25 shots for the Penguins.

Wilkes-Barre/Scranton will return home for its next game, Saturday, Nov. 27, against the Providence Bruins. Saturday’s showdown between the Penguins and Bruins is also Wilkes-Barre/Scranton’s annual Hockey Fights Cancer night. Game time is scheduled for 6:05 p.m. at Mohegan Sun Arena at Casey Plaza.