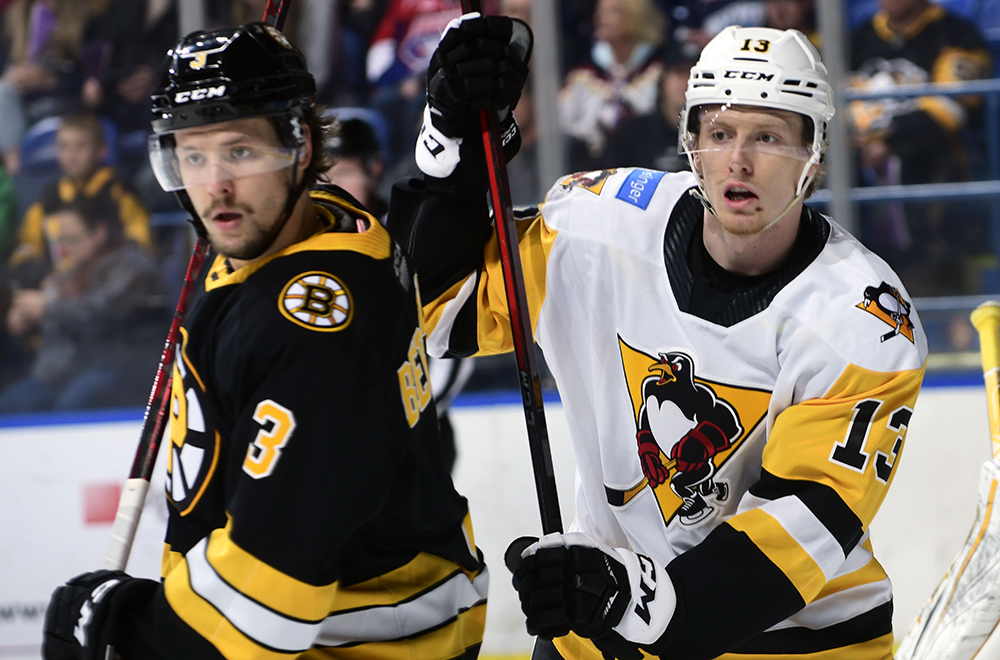 WILKES-BARRE, Pa. – The Wilkes-Barre/Scranton Penguins lost to the Providence Bruins, 5-1, on Saturday night at Mohegan Sun Arena at Casey Plaza.

Wilkes-Barre/Scranton (8-8-0-2) scored the first goal of the game, only to be buried by Providence’s response that included five unanswered goals and a hat trick by Zach Senyshyn.

After an exciting first period yielded no goals, both teams tallied in the second stanza. Radim Zohorna stuffed a loose puck across the Providence Bruins’ goal line at 9:40. Wilkes-Barre/Scranton maintained the 1-0 lead for roughly seven minutes until Brady Lyle struck and evened the score.

The Bruins broke the stalemate at 3:03 of the third period with the first of Senyshyn’s three goals. Set up on the backdoor during a man advantage, Senyshyn slammed in the seam pass and gave Providence the lead.

With less than four minutes left in the contest, Senyshyn gave the Bruins an insurance marker with his second marker of the game. Not even a minute later, Jack Studnicka provided even more cushion with an empty-net goal to make it 4-1.

Senyshyn completed the hat trick and a four-point night with 58 seconds left in regulation.

Penguins goaltender Louis Domingue finished the night with a total of 22 saves, while Kyle Keyser accrued 20 saves while manning the crease for the Bruins.

Wilkes-Barre/Scranton is on the road for its next game on Friday, Dec. 3 against the Syracuse Crunch. Puck drop is scheduled for 7:00 p.m. at Upstate Medical University Arena at The Oncenter War Memorial. The Penguins return home to face off against the Charlotte Checkers the next day on Saturday, Dec. 4 for their annual Teddy Bear Toss Game. Game time for the Penguins and Checkers is scheduled for 6:05 p.m. at Mohegan Sun Arena at Casey Plaza.