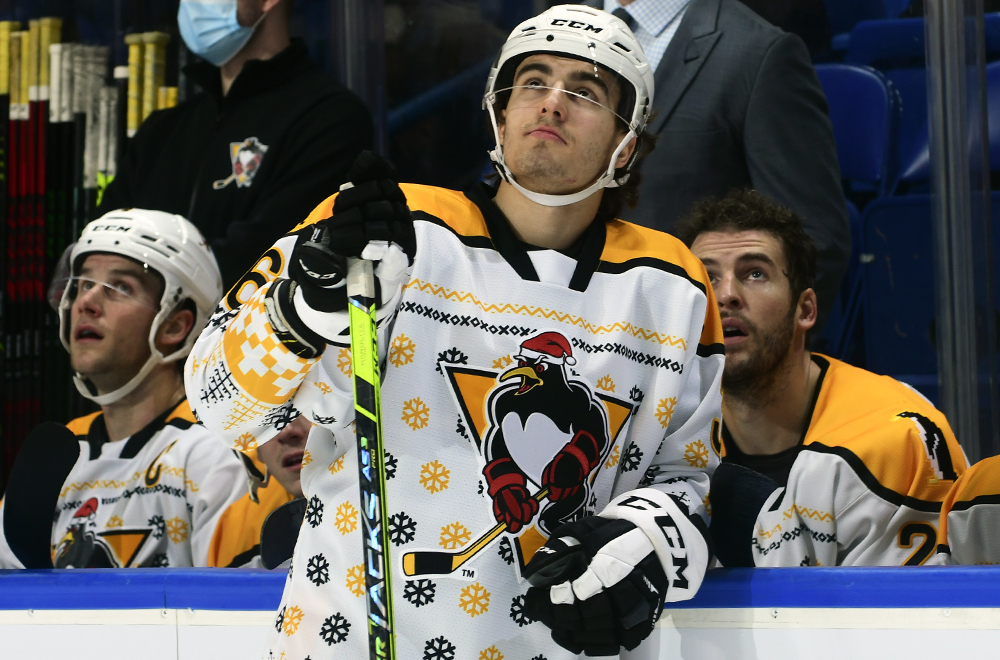 WILKES-BARRE, Pa. – The Wilkes-Barre/Scranton Penguins fell in overtime to the Hershey Bears, 3-2, on Saturday night at Mohegan Sun Arena at Casey Plaza.

The team’s annual Teddy Bear Toss started with a bang, but ended with Wilkes-Barre/Scranton (8-8-1-2) being handed its first overtime loss of the season.

The Penguins struck early in the first period thanks to a beautiful goal from Valtteri Puustinen 4:07 into the contest. Set up by Félix Robert, Puustinen hammered a one-timer to the back of the Bears’ net. Fans in attendance contributed to the excitement by showering the ice with stuffed animals to be donated to children in need this holiday season through the Tobyhanna Army Depot’s Operation Santa Claus.

After the teddy bear clean up, Hershey wasted no time evening the score. Bobby Nardella found the top corner following a face-off win in the Penguins’ zone.

Hershey broke the stalemate early in the middle frame after another face-off win and capitalized on the man advantage. Cody Franson whipped a powerful one-timer past Tommy Nappier at 3:23 of the second period. However, the Penguins responded 28 seconds later with a wicked one-timer of their own. Radim Zohorna fed Robert to tie the score at 2-2.

The final 20 minutes of regulation passed without either team finding the back of the net. In the last minute of play in overtime, Nappier made a brilliant save to deny a two-on-one rush, but Axel Jonsson-Fjällby swatted the rebound out of mid-air and gave Hershey the win.

Nappier finished the night with 27 saves while Bears goaltender Pheonix Copley accrued 28 saves for the victory.

Wilkes-Barre/Scranton is back on home ice for the second game of their back-to-back, weekend homestand tomorrow, Sunday, Dec. 12. The Penguins will take on the Springfield Thunderbirds for a Kids Free Sunday presented by Knoebel’s, and kids in attendance will also receive a $5 ride book to Knoebel’s. Puck drop is scheduled for 3:05 p.m. at Mohegan Sun Arena at Casey Plaza.