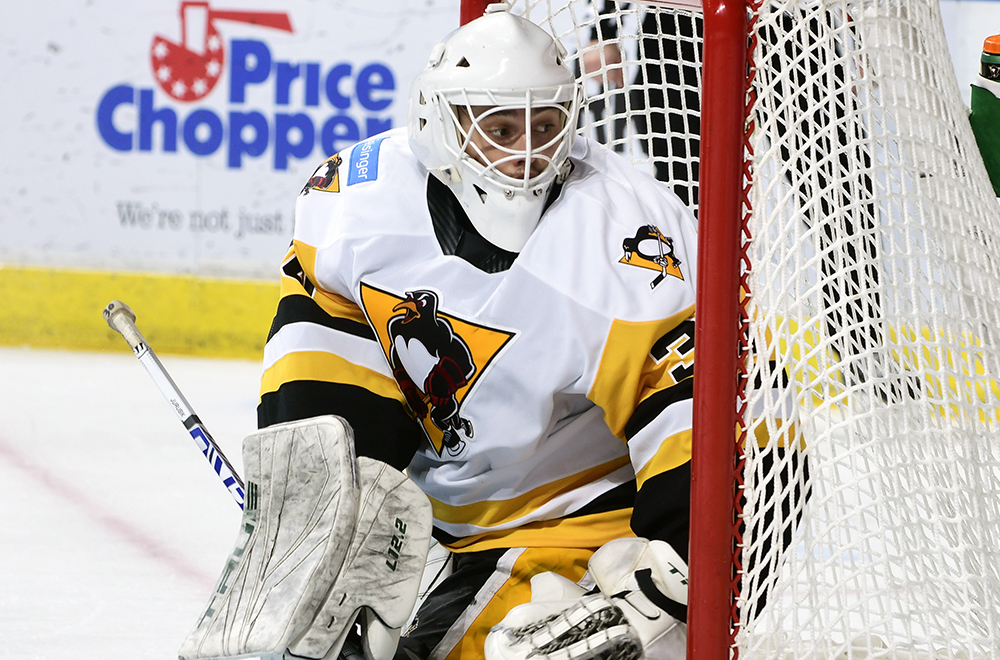 Wilkes-Barre/Scranton (9-8-1-2) unloaded a season-high six goals while Jurusik backstopped the team with a 28-save clean sheet in his first AHL game.

Anthony Angello kicked off the scoring with the team’s first shorthanded goal of the season. Although Springfield’s goaltender Colten Ellis denied the initial shot on an odd-man rush, Angello buried the rebound at 8:39 of the opening frame.

Not even two minutes into the second period, Wilkes-Barre/Scranton struck again thanks to Félix Robert. From there, the Penguins were off to the races.

Pierre-Olivier Joseph added his name to the scoresheet with a precision shot to the short-side, top corner at 8:29 of the middle frame. Twenty-six seconds later, Joseph set up Matt Bartkowski for a booming slap shot that found the back of the net.

The Thunderbirds changed goaltenders after the back-to-back goals from the Penguins, substituting Joel Hofer in for Ellis. The move did little to stop Wilkes-Barre/Scranton’s momentum, as Kyle Olson put the Penguins further ahead, 5-0, with 2:54 left in the period.

Ellis checked back in for the final 20 minutes of play. Justin Almeida netted his first goal of the season to run the Penguins’ lead to 6-0 at 8:44 of the third period.

Jurusik fended off furious attempts by Springfield to snap the shutout at the end of the second period as well as throughout the third. He held firm, securing a debut for the ages.

Ellis accrued a total of 19 saves on 24 shots faced, while Hofer collected six saves on seven shots during his 11 minutes of relief work.

Wilkes-Barre/Scranton returns to the ice for another home game on Tuesday, Dec. 14 against the Hershey Bears. Puck drop between the Penguins and Bears is scheduled for 7:05 p.m. at Mohegan Sun Arena at Casey Plaza.