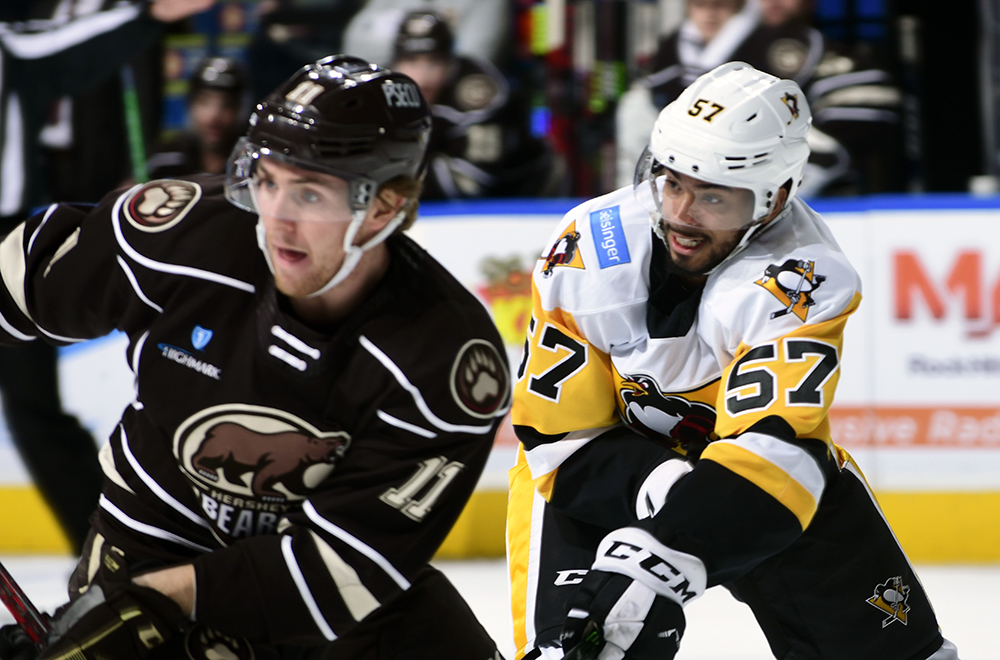 WILKES-BARRE, Pa. – The Wilkes-Barre/Scranton Penguins lost to the Hershey Bears, 4-1, on Tuesday night at Mohegan Sun Arena at Casey Plaza, where Pierre-Olivier Joseph scored the only point.

Wilkes-Barre/Scranton (9-9-1-2) saw a close game turn on its head late in the second period and never recovered. Pierre-Olivier Joseph did manage to prevent his team from being shut-out, notching the Penguins’ only goal of the contest.

Joe Snively opened the scoring at 11:48 of the first period, sliding a shot from the slot past the far-side of Penguins goaltender Matt Jurusik.

In just his second AHL start, Jurusik made several acrobatic saves in the next period, keeping the Penguins within striking distance.

It looked as if Hershey’s 1-0 lead would persist to the second intermission, until the Bears conjured a pair of goals in the final two minutes of the middle frame. Kody Clark slipped a pinballing puck underneath Jurusik with 1:21 left in the period, and then Axel Jonsson-Fjällby lit the lamp with 18.9 seconds left.

Jurusik finished the night with 22 saves, while Copley posted 18 stops.

Wilkes-Barre/Scranton looks for revenge when they visit Hershey this coming Saturday, Dec. 18. Puck drop between this weekend’s meeting is slated for 7:00 p.m. at Giant Center. The Penguins’ next home game isn’t until after the holiday break when they host the Bears yet again on Monday, Dec. 27. Game time will be 7:05 p.m. at Mohegan Sun Arena at Casey Plaza.