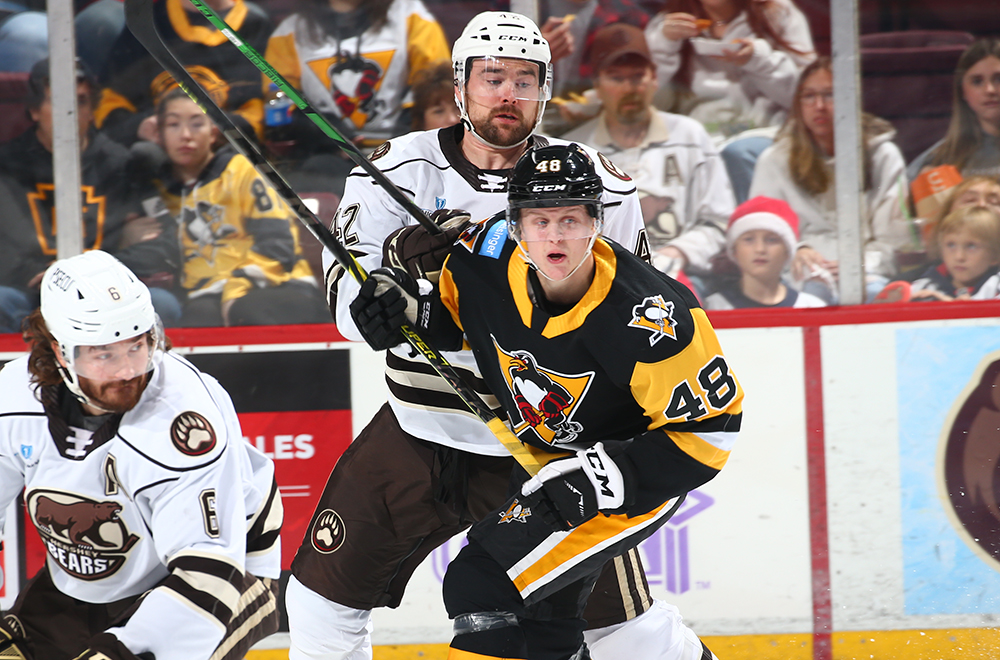 HERSHEY, Pa. – The Wilkes-Barre/Scranton Penguins lost to the Hershey Bears, 8-3, on Saturday night at Giant Center.

Wilkes-Barre/Scranton (9-10-1-2) couldn’t keep up in a track meet with its in-state rival, but did receive multi-point outings from the pair of Valtteri Puustinen (1G-1A) and Chris Bigras (0G-2A).

The first period featured a breakneck pace, but after the two teams traded chances for eight minutes, Hershey seized control.

Kody Clark set up Kale Kessy for the opening goal at 9:44, then Clark lit the lamp himself at 13:04. Less than two minutes later, Ryan Dmowski ran the Bears’ lead to 3-0.

Wilkes-Barre/Scranton made sure not to enter the first intermission empty-handed. Jordy Bellerive rang one off the post and in with 1:13 left in the first period.

Tommy Nappier stepped between the pipes for Wilkes-Barre/Scranton at the start of the second period, replacing the team’s starter, Alex D’Orio. But just like the first, Hershey unloaded three-straight goals in the middle frame.

Mike Vecchione reestablished the Bears’ three-goal edge four minutes into the period, followed by strikes from Bobby Nardella and Mason Morelli. Puustinen uncorked a wicked one-timer for a power-play goal at 11:19 of the second stanza, cutting Hershey’s lead down to 6-2.

Axel Jonsson-Fjällby answered back with a man-advantage marker for the Bears early in the third period, making it 7-2.

The Penguins received a goal from Matt Bartkowski midway through the final frame, but that was the last time they solved Bears goalie Pheonix Copley. Shane Gershich rounded out the scoring with a shorthanded breakaway in the final minute of regulation.

D’Orio finished the game with nine saves on 12 shots faced, while Nappier made 19 denials on 24 shots in his relief appearance. Copley earned the victory with 33 saves for Hershey.

Wilkes-Barre/Scranton’s next game is scheduled for Wednesday, Dec. 22, when it visits the Rochester Americans in the last game before the holiday break. Puck drop between the Penguins and Amerks is slated for 7:05 p.m. The Penguins’ next home game is Monday, Dec. 27 against the Bears. Game time will be 7:05 p.m. at Mohegan Sun Arena at Casey Plaza.