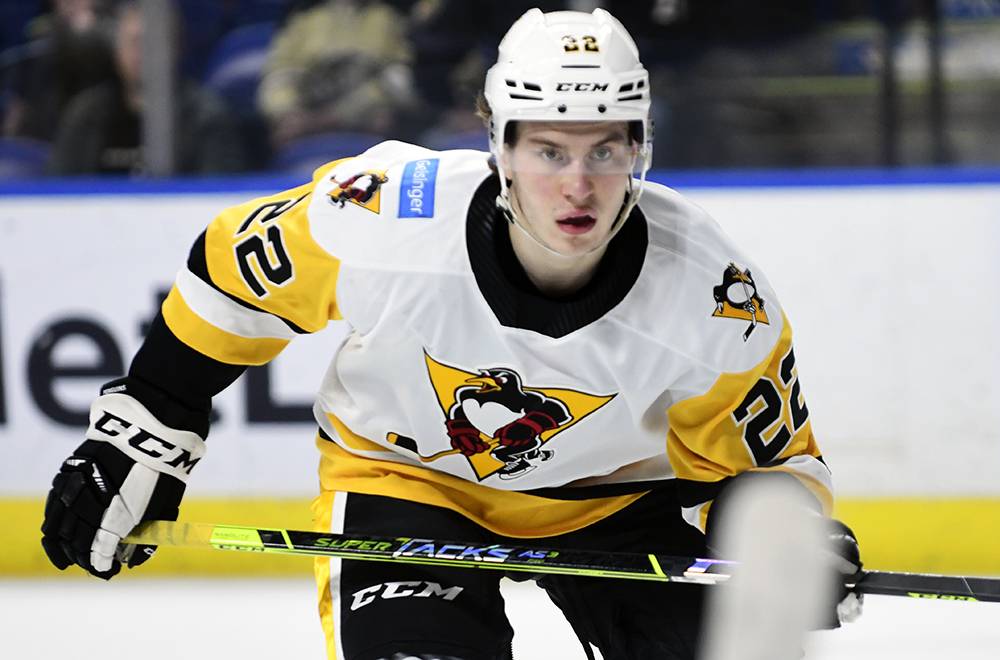 WILKES-BARRE, Pa. – The Wilkes-Barre/Scranton Penguins dropped a 4-1 decision to the Hershey Bears on Monday night at Mohegan Sun Arena at Casey Plaza.

Wilkes-Barre/Scranton (9-10-1-2) came out strong and controlled most of the play at five-on-five for two periods, but its Keystone State rival ran away thanks to a trio of power-play goals.

The Penguins seized the first lead of the game with a power-play goal by Sam Poulin. After the vision and patience of Jan Drozg delivered the puck to Poulin in the slot, the rookie ripped a snap shot that glanced off Hunter Shepard’s glove but had enough power to roll across the goal line. Poulin’s go-ahead goal arrived at 17:12.

Hershey answered back with a man-advantage marker of its own when Ryan Dmowski lit the lamp at 7:36 of the second period.

Tied, 1-1, going into the third period, the Bears pulled away with more power-play prowess. Matt Moulson tipped one in while a man up at 2:05 of the final frame, followed up by another Dmowski power-play goal midway through the period.

Louis Domingue posted 30 saves in net for the Penguins, while Shepard recorded 24 stops.

Wilkes-Barre/Scranton’s next game is once again against the Hershey Bears on Wednesday, Dec. 29. This time, it will be on the Bears’ home ice. Puck drop between the Penguins and Bears is scheduled for 7:00 p.m. at Giant Center.

CELEBRATE THE HOLIDAYS WITH THE PENGUINS