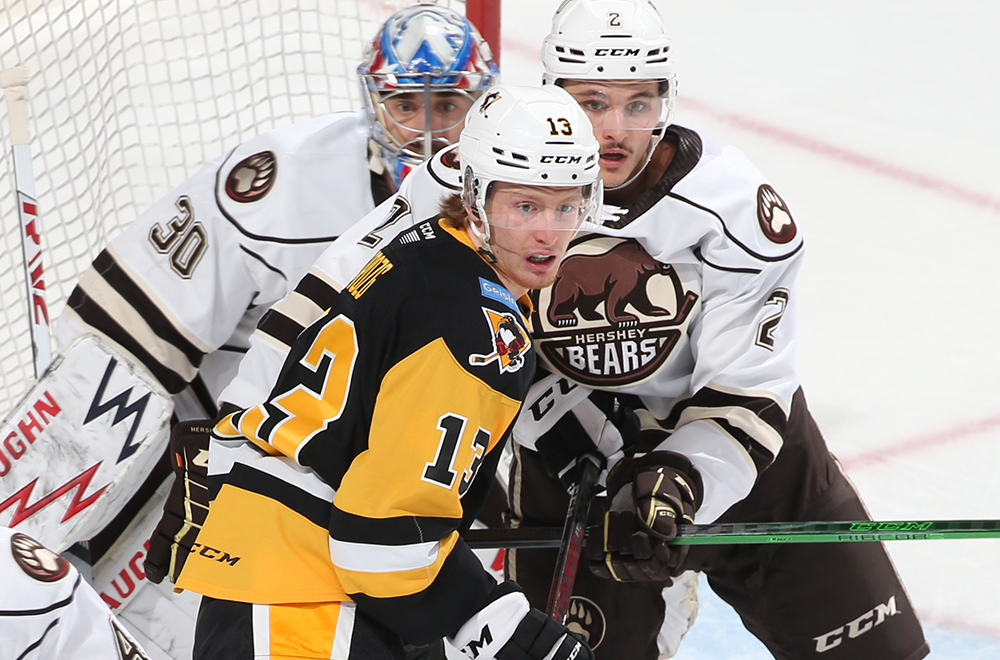 HERSHEY, Pa. – The Wilkes-Barre/Scranton Penguins fell in their final game of 2021 to the Hershey Bears, 6-1, on Wednesday night at Giant Center.

Wilkes-Barre/Scranton (9-12-1-2) played even with their in-state rival during the opening frame, but Hershey pulled away with multi-goal outings in both the second and third periods.

It took until the second period for either team to light the lamp, but at 1:49 of the middle frame, Tobias Geisser gave the Bears the game’s first goal.

Bobby Nardella tacked on another tally for Hershey with 31 seconds left in the second period, but Jan Drozg promptly answered with a snipe to put the Penguins on the board.

Hershey reestablished its four-goal lead five minutes into the final frame on a point shot by Dylan McIlrath that ricocheted off a Penguins defenseman and past goalie Alex D’Orio. Ryan Dmowski rounded out the scoring at 6:21 of the third period.

D’Orio finished the game with 28 saves, while Hunter Shepard posted 19 stops for Hershey.

Wilkes-Barre/Scranton’s next game will also be on the road on Friday, Jan. 7 against the Utica Comets. Game time between the Penguins and Comets is scheduled for 7:00 p.m. The Penguins don’t return home until a week later, Friday, Jan. 14, when they take on the Lehigh Valley Phantoms. Puck drop for Penguins vs. Phantoms will be 7:05 p.m. at Mohegan Sun Arena at Casey Plaza.

RECAP – Individual game tickets and season-ticket packages for the 2021-22 season are on sale now. Full-Season, 22-game, 12-game, Flexbook and Premium Seating plans are available by reaching out to the Penguins directly at (570) 208-7367.