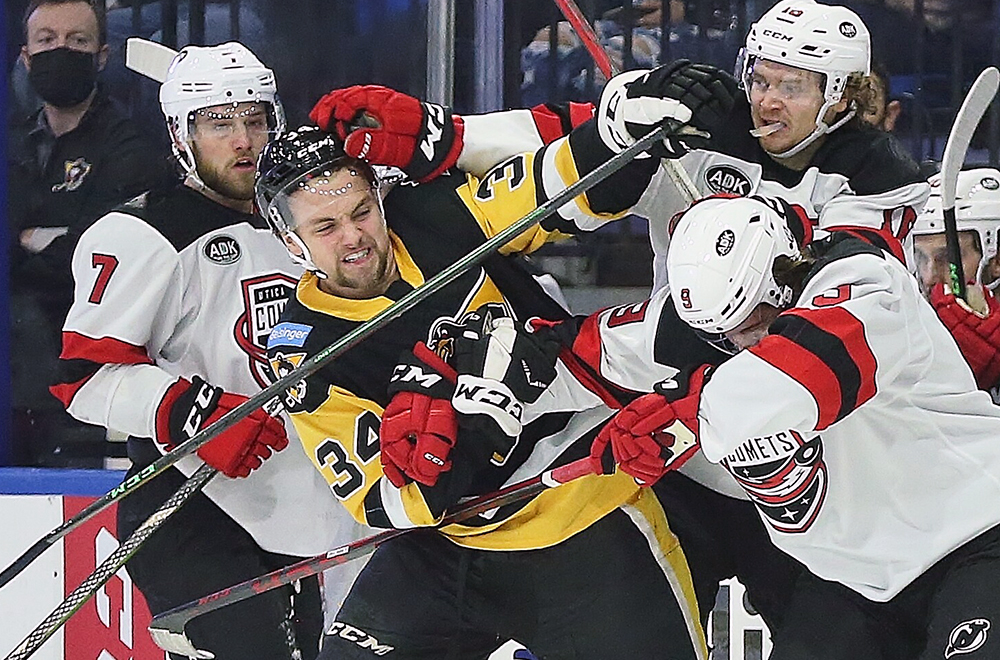 UTICA, N.Y. – The Wilkes-Barre/Scranton Penguins produced a feverish, third-period comeback, but ultimately fell to the Utica Comets in a shootout, 6-5, at Adirondack Bank Center on Friday night.

Wilkes-Barre/Scranton (9-12-1-3) clawed out of a two-goal hole in the third period and even took the lead with three tallies in the final frame. However, Utica forced overtime and survived long enough to secure victory in the shootout.

The first game of the New Year for the Penguins featured an action-packed opening period, starting with a power-play goal from Valtteri Puustinen. Playing in his first game with Wilkes-Barre/Scranton, Alex Nylander set-up Puustinen for a one-timer at 5:03.

Utica swiftly responded with back-to-back goals from wild bounces. Alex Holtz buried a rebound at the Penguins’ net-front at 6:37. Two minutes later, a ricochet off of Brian Flynn put the Comets ahead, 2-1.

The breakneck pace continued throughout the first period, and eventually resulted in a tying goal for Wilkes-Barre/Scranton. A slap shot from Cam Lee was tipped in by Jordy Bellerive at 12:26.

The Comets hopped back on top, 3-2, with a man-advantage marker from Nate Schnarr four minutes into the middle frame. Ryan Schmelzer extended that lead to 4-2 midway through the period.

Wilkes-Barre/Scranton started its comeback with a rebound goal by Jan Drozg at 3:51 of the third period. Less than three minutes later, Puustinen’s second of the night evened things up, 4-4.

Nylander recorded his second-assist of the game by delivering a slick feed to Wilkes-Barre/Scranton captain Taylor Fedun for a go-ahead goal. Undetected on the rush, Fedun stepped up to Nylander’s area pass and roofed a wrister past Comets goalie Mareks Mitens at 8:33 of the third period.

Utica stemmed the tide and equalized with a power-play goal by Frédérik Gauthier with less than eight minutes left in regulation.

Overtime came and went without a winner, so on to the shootout they went. Holtz and Anthony Angello traded goals in the first round, but Fabian Zetterlund’s slap-shot conversion in the second round proved to be the deciding tally for Utica.

Tommy Nappier finished the game with 27 saves through regulation and OT, plus one save during the three-round shootout. Mitens earned the win by making 31 saves in 65 minutes and an addition two stops in the shootout.

Wilkes-Barre/Scranton’s next game is also on the road, tomorrow, Saturday, Jan. 8, against the Hershey Bears. Game time between the Penguins and Bears is scheduled for 7:00 p.m. at Giant Center. The Penguins will return home on Friday, Jan. 14 when they take on the Lehigh Valley Phantoms. Puck drop for Penguins vs. Phantoms will be 7:05 p.m. at Mohegan Sun Arena at Casey Plaza.

PENGUINS STRETCH POINT STREAK TO 10 GAMES WITH WIN OVER BEARS