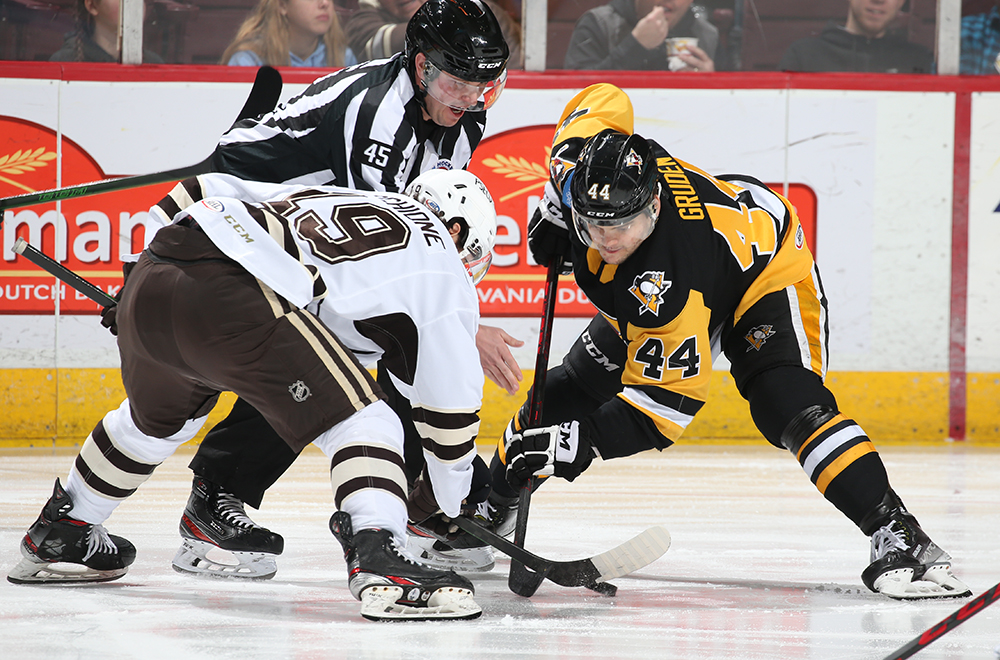 HERSHEY, Pa. – The Wilkes-Barre/Scranton Penguins delivered a tenacious performance on Sunday night, but were only rewarded with a 3-2 loss to the Hershey Bears at Giant Center.

Playing in the third game of a three-in-three weekend, Wilkes-Barre/Scranton (9-14-1-3) controlled the pace of play and generated a glut of scoring chances in the latter half of the game. However, a pair of third-period goals wasn’t enough to come back against its in-state rival.

Penguins goalie Alex D’Orio shined in the opening frame, conjuring a series of excellent saves amidst tons of traffic in front of his net. D’Orio’s 13 first-period saves helped keep the game tied 0-0 going into the first intermission.

Hershey used its net-front screens to finally solve D’Orio at 7:06 of the second period, when Dylan McIlrath’s point shot navigated through a sea of bodies and into the Penguins’ net.

Wilkes-Barre/Scranton tiled the ice as the second stanza wore on, but were unable to put the puck past Pheonix Copley. Several of the Penguins’ best chances were shot wide, but Copley made his best stop by denying Félix Robert on a breakaway.

Hershey earned one last chance before the end of the period, sneaking in a Mike Vecchione goal with one second left before the intermission.

Down 2-0 going into the third, the Penguins came out with a purpose. Mitch Reinke notched his first goal as a Penguin to put the Black and Gold on the board 30 seconds into the frame.

Wilkes-Barre/Scranton’s momentum stalled when Garrett Pilon used a power-play goal to put Hershey back ahead,    3-1, midway through the third period.

Radim Zohorna pulled the Penguins back within one during a six-on-four man advantage created by a Bears penalty and Wilkes-Barre/Scranton pulling its goalie for an extra attacker. Anthony Angello darted behind the Bears’ cage, but passed back across the grain for Zohorna to finish the slam dunk with 2:27 left in regulation.

The Penguins got the extra attacker back on the ice in an attempt to generate a tying goal, but the Bears outlasted their final attempts at an equalizer.

D’Orio made 22 saves in the loss, while Copley posted 26 stops for the win.

Wilkes-Barre/Scranton’s next game will be Friday, Jan. 14 when it hosts the Lehigh Valley Phantoms at Mohegan Sun Arena at Casey Plaza. Puck drop between the Penguins and Phantoms is slated for 7:05 p.m.