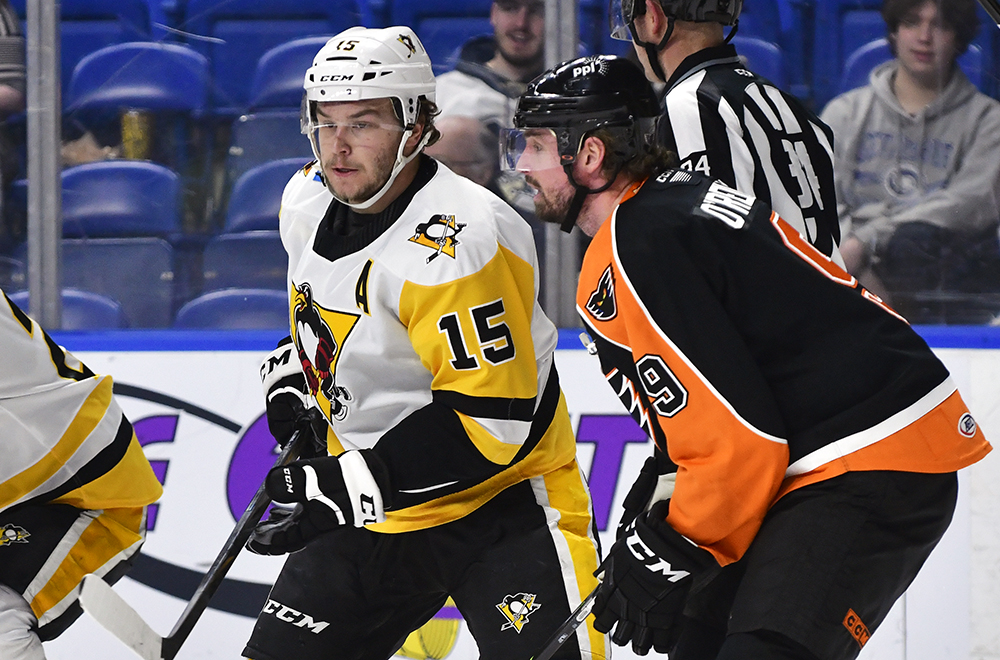 Wilkes-Barre/Scranton (11-16-1-3) put forth another yeoman’s effort and did not allow a goal at even strength all night. However, Lehigh Valley earned the edge thanks to a pair of power-play goals in the third period.

Scoreless through the first 40 minutes of play, both goalies played a big role in why it took so long for anyone to find twine. Phantoms netminder Felix Sandström made a handful of stops on Penguins redirections in the first period. Penguins goalie Alex D’Orio conjured a number of great saves when Lehigh Valley had a volley of rebound opportunities during the opening, frame as well.

The second period also concluded without a goal, but it did see an increase in physicality. Jamie Devane connected on several thundering checks, but the biggest hit of the game occurred when Nathan Légaré bulldozed Phantoms defenseman Linus Högberg through the Penguins’ bench door.

P.O Joseph hit the post during a second-period power play, perhaps Wilkes-Barre/Scranton’s best look up to that point in the game. The Penguins then hit two more posts early in the third period, keeping the game knotted, 0-0.

The Penguins responded with Jordy Bellerive tipping in a Juuso Riikola point shot roughly three minutes later. However, the Phantoms pulled back ahead midway through the third with a power-play goal from Linus Sandin.

Maksim Sushko put a bow on the Phantoms’ win with an empty-netter in the final minute of regulation.

D’Orio finished the night with 21 saves, while Sandström earned the victory with 28 stops.

Wilkes-Barre/Scranton will remain on home ice for its next game, Friday, Jan. 21, when it plays the Toronto Marlies for the first time this season. Puck drop between the Penguins and Marlies is slated for 7:05 p.m.