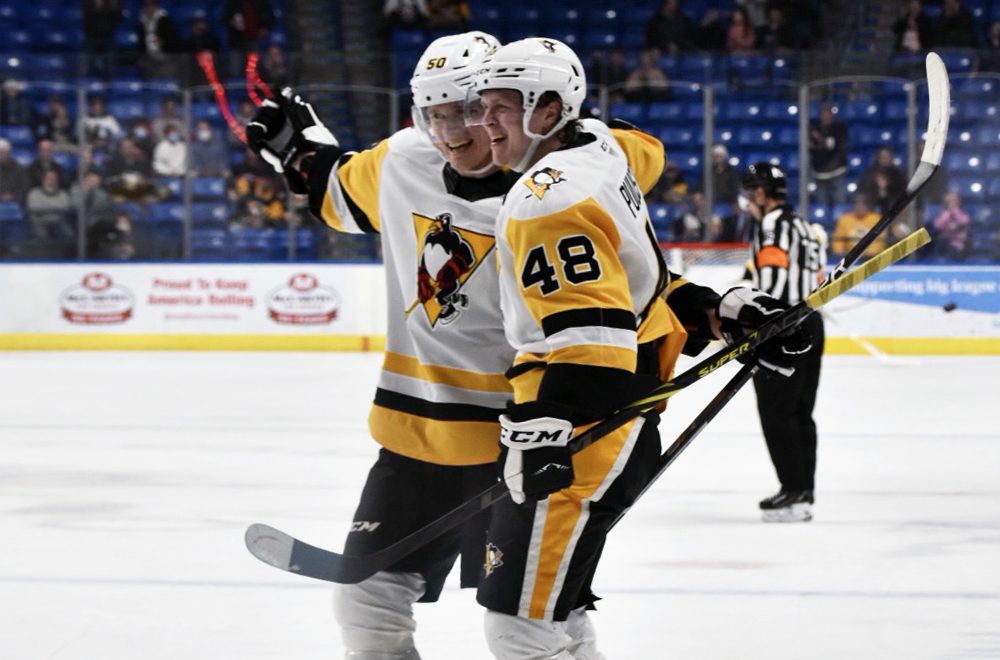 WILKES-BARRE, Pa. – The Wilkes-Barre/Scranton Penguins rattled off five goals in a 5-1 triumph over the Toronto Marlies on Friday night at Mohegan Sun Arena at Casey Plaza.

Wilkes-Barre/Scranton (12-16-1-3) received a two-goal, three-point effort from Alex Nylander in its action-packed win on home ice. Nylander helped the Penguins rally the crowd early and later factored in on a pair of power-play goals.

The Penguins made an instant impact by scoring 30 seconds into the game. Anthony Angello and Sam Poulin combined for a tenacious forecheck that forced a miscue by the Marlies, allowing Poulin to set-up Nylander for the opening goal.

Up 1-0, Wilkes-Barre/Scranton was dealt some adversity later in the first period when it had to face a five-on-three penalty kill for one minute and 56 seconds. Alex D’Orio was dialed in during the duration of Toronto’s two-man advantage, making several saves including a highlight-reel heist on Alex Steeves.

The Penguins ballooned their lead to 3-0 with a pair of goals notched less than a minute apart. First, Valtteri Puustinen cranked a one-timer to the back of the net for a power-play goal at 15:42 of the middle frame. Fifty-five seconds later, Filip Hållander lit the lamp.

Toronto used a man-advantage marker to spoil Wilkes-Barre/Scranton’s party with 10.1 seconds left in the second stanza. Antti Suomela stuffed a centering feed underneath D’Orio, giving the Marlies some hope going into the intermission.

Kasper Björkqvist dashed those hopes by tallying a breakaway goal at 6:40 of the third period. Nylander added another power-play goal for the Penguins a minute later to round out the scoring at 5-1.

D’Orio recorded 21 saves and earned his first win of the season, while Erik Källgren posted 25 stops between the pipes for the Marlies.

Wilkes-Barre/Scranton will face-off against Toronto again tomorrow, Saturday, Jan. 22 for Geisinger Pink in the Rink. Puck drop for the rematch between the Penguins and Marlies is slated for 6:05 p.m. at Mohegan Sun Arena at Casey Plaza.