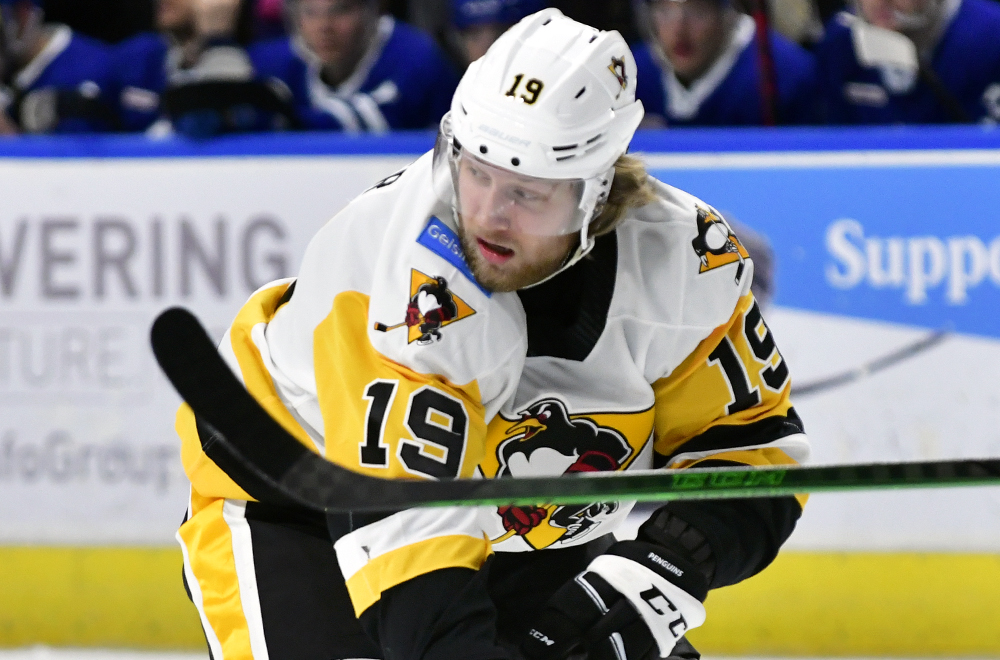 WILKES-BARRE, Pa. – The Wilkes-Barre/Scranton Penguins erased a two-goal deficit in the third period and defeated the Toronto Marlies in overtime, 3-2, on Saturday night at Mohegan Sun Arena at Casey Plaza.

Wilkes-Barre/Scranton (13-16-1-3) had its rally spearheaded by the duo of Valtteri Puustinen and Alex Nylander. Puustinen recorded three points (1G-2A) to factor in on all three Penguins tallies, while Nylander delivered a pair of goals that both forced and ended overtime.

Toronto struck first, using a crisp passing display to set-up Jack Kopacka for the finish midway through the opening frame. Shortly after the expiration of a Penguins penalty kill, Mikhail Abramov picked the top corner and gave the Marlies a 2-0 edge at 15:44.

That two-goal lead persisted through the second period and into the early stages of the third, when Wilkes-Barre/Scranton finally solved Toronto goalie Michael Hutchinson. Puustinen capitalized on a slick feed from Félix Robert for his 13th goal of the season at 3:03 of the third period.

Hutchinson held the Penguins at bay for as long as he could, but they proved determined to not let their home crowd leave disappointed. Wilkes-Barre/Scranton pulled its goalie for an extra attacker, and Nylander lit the lamp to tie the game, 2-2, with 46 seconds left in regulation.

Nylander produced the game-winner 104 seconds into sudden-death OT during a four-on-three man advantage. Puustinen and Juuso Riikola assisted on both of Nylander’s timely tallies.

Alex D’Orio earned the victory in goal with 22 saves while making his second consecutive start in fewer than 24 hours. Hutchinson turned away 31 bids in his post-regulation loss.

Wilkes-Barre/Scranton will remain on home ice for its next game, Monday, Jan. 24 against the Cleveland Monsters. Puck drop between the Penguins and Monsters is slated for 7:05 p.m. at Mohegan Sun Arena at Casey Plaza.