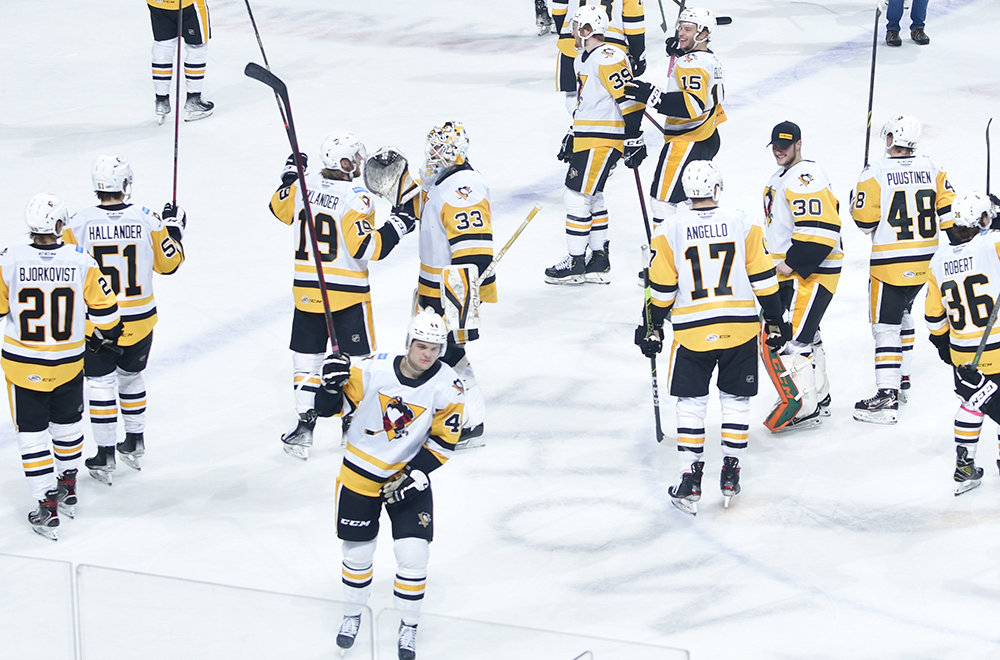 WILKES-BARRE, Pa. – The Wilkes-Barre/Scranton Penguins’ offense took it to the Cleveland Monsters and walked away with a 5-1 win on Monday night at Mohegan Sun Arena at Casey Plaza.

Skating in a game that was postponed from New Years’ Eve, Wilkes-Barre/Scranton (14-16-1-3) saved the celebration for Monday, scoring early and often in its final game of a long homestand. The Penguins have now emerged victorious in five of their last six games and racked up 13 goals in their last three contests.

Matt Bartkowski opened the scoring at 6:04, forcing a quick shot through Monsters goalie Jean-François Bérubé. Bérube handed the Penguins their next goal, turning the puck over to Félix Robert who rifled it into the net before Bérubé could scramble back into position.

Wilkes-Barre/Scranton ran its lead to 3-0 by scoring with 22 seconds left in the first period.

That spelled an early end to Bérubé’s night, who was replaced by rookie netminder Jet Greaves at the start of the middle frame. The goaltending change did little to slow the Penguins’ scoring, as Anthony Angello pulled off a nasty toe-drag goal following a feathery pass from Sam Poulin. Angello’s tally arrived at 4:53 of the second period.

Kasper Björkqvist put Wilkes-Barre/Scranton ahead by five with 4:21 remaining in the second stanza.

Cleveland spoiled Alex D’Orio’s chances of earning his first AHL shutout when Justin Scott smacked a loose puck out of mid air and to the back of the Penguins’ net three minutes into the third period. Unfazed, D’Orio remained dialed in for the remainder of regulation and made 31 saves to earn his third consecutive victory.

Bérubé’s night concluded after stopping six of nine shots in 20 minutes of work. Greaves notched 12 saves on 14 bids in two periods of relief.

Wilkes-Barre/Scranton’s next game is tomorrow, Tuesday, Jan. 25, against the Hershey Bears at Giant Center. Puck drop between the Penguins and Bears is slated for 7:00 p.m. The Penguins’ next home game will be Wednesday, Feb. 2, when they host the Springfield Thunderbirds for a 7:05 p.m. tilt at Mohegan Sun Arena at Casey Plaza.