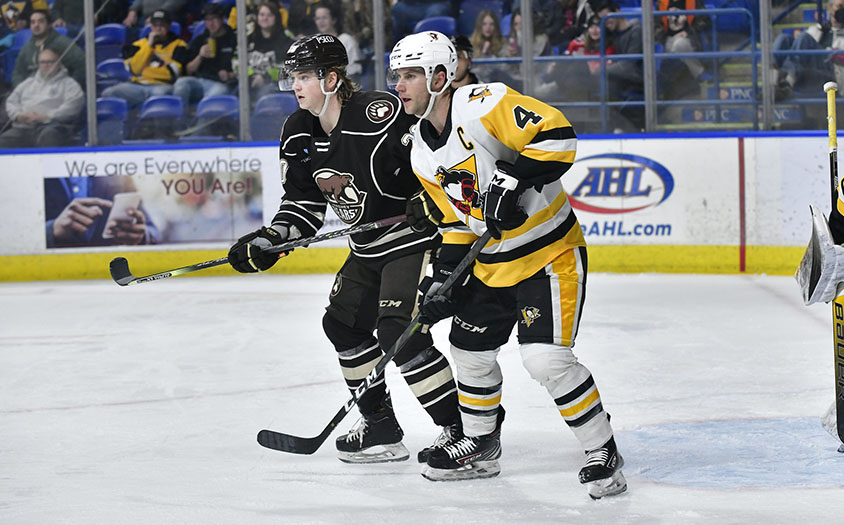 The Wilkes-Barre/Scranton Penguins wrap up a string of five games in seven days when they face the Hershey Bears tonight on the road.

The Penguins carry a three-game winning streak into tonight’s contest, while the Bears have hit a bit of a slump, posting a 1-2-1-1 mark in their past five games.

Goaltender Alex D’Orio has recorded victories in each of the Penguins’ past three games, and has allowed just four goals over that stretch, stopping 74 of 78 shots.

Valtteri Puustinen (2+3) and Alex Nylander (4+1) each recorded five points in the weekend series against the Toronto Marlies.

Nylander has 10 points (6+4) in 10 games since joining Wilkes-Barre earlier this month.

Nylander is tied for ninth in the AHL with a combined 14 goals between the Rockford Ice Hogs and Penguins this season.

Felix Robert carries a three-game point streak (1+3=4) into tonight’s game.  He has eight points (3+5) in his past seven games.

Hershey split a two-game series on home ice with the Hartford Wolf Pack last weekend, capturing a 5-0 win on Saturday, and dropping a 3-2 decision on Sunday.

Axel Jonsson-Fjallby recorded a hat trick in Saturday’s win.  He has eight points (4+4) in the past seen games.

Joe Snively, the Bears leading scorer, ranks tied for fourth in the league with 36 points (13+23), and his 23 assists are tied for sixth.

Snively has points in 11 of the past 12 games he has suited up for with the Bears.  He had a nine-game point streak snapped the last time the Penguins and Bears met on January 16.

Tickets for all Penguins home games are available at the Mohegan Sun Arena box office, by phone at 570-208-7367, or online.