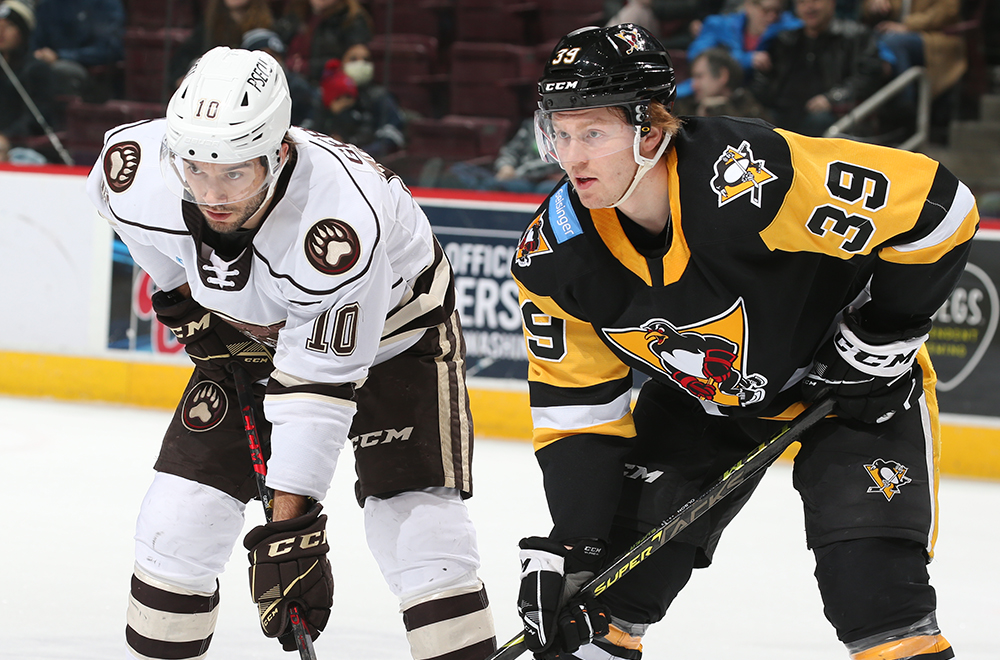 HERSHEY, Pa. – At the end of a grueling stretch, the Wilkes-Barre/Scranton Penguins lost a 6-2 game to the Hershey Bears on Tuesday night at Giant Center.

Wilkes-Barre/Scranton (14-17-1-3) was playing its eighth game in 12 days and still managed to come out the gate hot on Tuesday. However, Hershey eventually took control and rattled off six unanswered goals.

The Penguins lit the lamp first by tallying five seconds into their first power play of the game. Juuso Riikola unleashed a potent slap shot to the top corner at 7:49 for his first AHL goal.

Nathan Légaré extended the Penguins’ lead to 2-0 midway through the opening frame.

Hershey completely turned the game on its head at the start of the second period. Waves of relentless pressure eventually led to Garrett Pilon scoring a wrap-around goal four minutes into the frame.

The Bears continued to levee hard hits at every opportunity and refused to let the Penguins challenge goalie Pheonix Copley as the period continued. Eventually, Marcus Vela deposited a rebound at the side of the Penguins’ net at 15:18 of the second period. Hershey seized a 3-2 lead three minutes later on a strike by Christopher Brown.

Joe Snively converted on a shorthanded breakaway at 11:54 of the third period to give the Bears a 4-2 cushion.

After a heated fracas that resulted in both Jonathan Gruden and Eddie Wittchow being handed game misconducts, Kale Kessy added another goal for Hershey with four minutes left in regulation. Snively tacked on an empty netter for good measure.

Wilkes-Barre/Scranton’s next game is Friday, Jan. 28, when it travels to the Buckeye State to take on the Cleveland Monsters. Puck drop between the Penguins and Monsters is slated for 7:00 p.m. at Rocket Mortgage FieldHouse. The Penguins’ next home game will be Wednesday, Feb. 2, when they host the Springfield Thunderbirds for a 7:05 p.m. tilt at Mohegan Sun Arena at Casey Plaza.